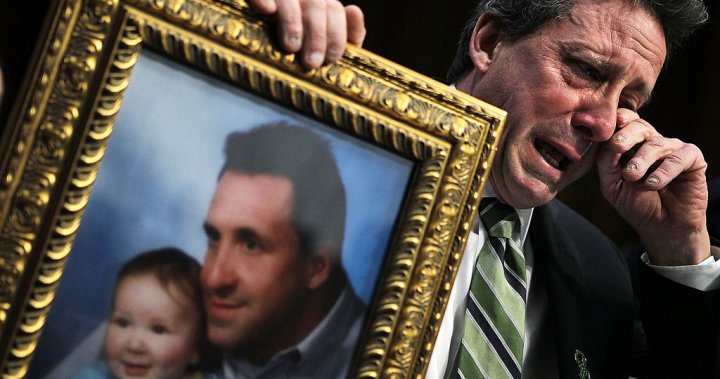 The father of a six-year-old who was killed during the 2012 Sandy Hook Elementary School shooting testified Tuesday that conspiracy theorist Alex Jones was a coward who made his life a living hell.

Jones is currently embroiled in multiple defamation lawsuits over comments he made on his hugely popular far-right talk show Infowars, falsely reporting that the school shooting at Sandy Hook was a hoax and the distraught parents who lost their children that day were crisis actors.

Neil Heslin and Scarlett Lewis, parents of the late Jesse Lewis, took the stand and recounted living in fear of Jones’ followers after he popularized the Sandy Hook conspiracy theory. Many other parents of Sandy Hook victims allege they suffered the same abuse.

Heslin and Lewis are seeking US$150 million in damages from Jones and his media company Free Speech Systems.

In more than an hour of emotional testimony during which he often fought back tears, Heslin said he has endured online abuse, anonymous phone calls and harassment on the street.

“I can’t even describe the past nine-and-a-half years of hell I have had to endure because of the negligence and recklessness of Alex Jones and the propaganda he has peddled for his own profits and success,” Heslin testified on Tuesday.

“What was said about me and Sandy Hook itself resonates around the world,” he said. “As time went on, I truly realized how dangerous it was. … My life has been threatened. I fear for my life, I fear for my safety.”

Heslin described years of harassment and death threats from Jones’ followers, including an incident when an individual drove past his house firing shots while shouting “Infowars” and “Alex Jones.”

Lewis, who took the stand after Heslin, recalled one Christmas morning when a stranger pulled into her driveway and started taking pictures.

She keeps a gun in her house now to protect her family, Lewis testified on Tuesday.

“I am a single mother and responsible for the safety of both of my boys, and I was not able to keep one of them safe,” she said. “So I am going to keep my surviving son safe.”

The family’s lawyer noted that Heslin, Lewis and their son have been in isolation under security following an “encounter” in Austin near the start of the trial.

“Today is very important to me and it’s been a long time coming … to face Alex Jones for what he said and did to me. To restore the honour and legacy of my son,” Heslin said during the trial.

But Jones was not in the courthouse to face him, a move Heslin called “a cowardly act.”

Jones skipped much of the testimony given during the two-week trial and had a cadre of bodyguards with him in the courtroom when he did attend.

Lewis testified that the harassment she has faced from Jones’ followers has made it difficult for her move on from the murder of her son.

“The fear and anxiety and unsafeness … keeps me from healing,” Lewis said according to CNN. “It definitely negatively impacts the healing process.”

On Monday, a forensic psychologist who studied both Heslin and Lewis testified that the pair suffer from a form of post-traumatic stress disorder that comes from constant trauma.

Dr. Roy Lubit told the court that Lewis fears for her safety and even refuses to turn on her air-conditioning unit at night because she worries that the noise will drown out the sound of an intruder or threat.

Heslin’s emotions have been “drained out” and he suffers nightmares about Jones, Lubit testified according to The Hill.

Jones has portrayed the lawsuit against him as an attack on his First Amendment rights to free speech and one of his lawyers said the conspiracy theorist has already paid a price for his comments, having been deplatformed in 2018 and losing millions of followers.

At stake in the trial is how much Jones will pay, as courts in Texas and Connecticut have already found Jones liable for defamation for his portrayal of the Sandy Hook massacre as a hoax involving actors aimed at increasing gun control — including in Heslin and Lewis’ case.

6:38
Things changed after Sandy Hook shooting, they got worse: Frum

Things changed after Sandy Hook shooting, they got worse: Frum – May 29, 2022

In both states, judges issued default judgements against Jones without trials because he failed to respond to court orders and turn over documents.

Sandy Hook families have separately sued Jones over his financial claims, arguing that the company is trying to protect millions owned by Jones and his family through shell entities.

While Heslin contends that he doesn’t know if the Sandy Hook hoax theory originated with Jones, it was Jones who “lit the match and started the fire” with an online platform and broadcast that reached millions worldwide.

Heslin told the jury about holding his son with a bullet hole through his head, even describing the extent of the damage to his son’s body. A key segment of the case is a 2017 Infowars broadcast that said Heslin holding his son didn’t happen.

An apology from Jones wouldn’t be good enough at this point, Heslin said.

Jones was taking the stand as of publishing time and has so far been chastised by the presiding judge for appearing to chew gum in court, which is not allowed.

WATCH: “Spit your gum out Mr. Jones,” Judge tells #AlexJones. He proceeds to tell her he had a tooth pulled and he was “massaging the hole with his tongue”, then wants to show the judge. Judge, “Sit down”. pic.twitter.com/Ws7ggjo1Uk

While the plaintiffs were testifying Tuesday, Jones said on Infowars that he thought Heslin was “slow” and might be “on the spectrum” — the video proof of those statements played in court.

WATCH: Alex Jones was on air 45 mins ago talking about #SandyHook victim father Neil Heslin as being “slow” and “on the spectrum”. Plaintiff’s attorney wants to play it during the continuation of Scarlett Lewis’ testimony. #AlexJones pic.twitter.com/WoakwqxlFi

— With files from The Associated Press and Reuters