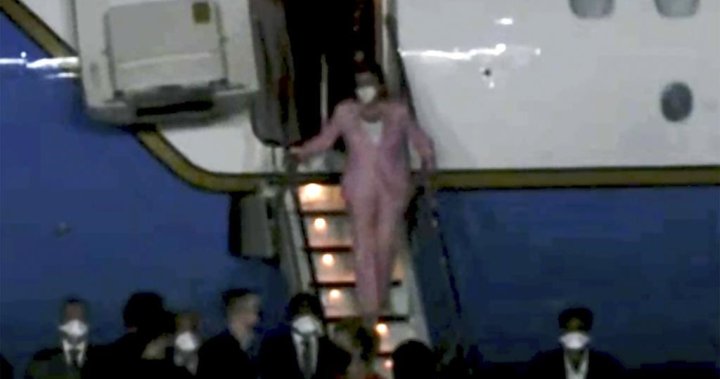 When House Speaker Nancy Pelosi flew into Taiwan on an Air Force passenger jet Tuesday, she became the highest-ranking American official in 25 years to visit the self-ruled island. China announced military maneuvers in retaliation, even as Taiwanese officials welcomed her and she headed to her hotel.

The reason her visit ratcheted up tension between China and the United States: China claims Taiwan as part of its territory, and it views visits by foreign government officials as them recognizing the island’s sovereignty.

President Joe Biden has sought to calm that complaint, insisting there’s no change in America’s longstanding “one-China policy,” which recognizes Beijing but allows informal relations and defense ties with Taipei.

Pelosi portrays her high-profile trip as part of a U.S. obligation to stand with democracies against autocratic countries, and with democratic Taiwan against China.

A look at some of the issues at play:

Why did Pelosi go to Taiwan?

Pelosi has made a mission over decades of showing support for embattled democracy movements. Those include a trip in 1991 to Tiananmen Square, where she and other lawmakers unrolled a small banner supporting democracy, as frowning Chinese security officers tried to shut them down. Chinese forces had crushed a homegrown democracy movement at the same spot two years earlier.

The speaker is framing her Taiwan trip as part of a broader mission at a time when “the world faces a choice between autocracy and democracy.” She led a congressional delegation to the Ukrainian capital of Kyiv in the spring, and her latest effort serves as a capstone to her years of promoting democracy abroad.

“We must stand by Taiwan,” she said in an opinion piece published by The Washington Post on her arrival in Taiwan. She cited the commitment that the U.S. made to a democratic Taiwan under a 1979 law.

“It is essential that America and our allies make clear that we never give in to autocrats,” she wrote.

What is the U.S. stand on Taiwan?

The Biden administration, and Pelosi, say the United States remains committed to its “one-China policy.”

Taiwan and mainland China split during a civil war in 1949. But China claims the island as its own territory and has not ruled out using military force to take it.

China has been increasing both diplomatic and military pressure in recent years. It cut off all contact with Taiwan’s government in 2016 after President Tsai Ing-wen refused to endorse its claim that the island and mainland together make up a single Chinese nation, with Communist Beijing the sole legitimate government.

How is the Chinese military handling the tension-raising trip?

Soon after Pelosi’s arrival, China announced a series of military operations and drills, which followed its promises of “resolute and strong measures” if Pelosi went through with her visit.

China’s People’s Liberation Army said the maneuvers would take place in the waters and skies near Taiwan and include the firing of long-range ammunition in the Taiwan Strait.

China’s official Xinhua News said the army planned to conduct live-fire drills from Thursday to Sunday across multiple locations. An image released by the news agency indicated that the drills were to take place in six different areas in the waters surrounding Taiwan.

Taiwan’s Defense Ministry said early Wednesday that China had sent 21 planes flying toward Taiwan, 18 of them fighter jets. The rest included an early warning plane and an electronic warfare plane.

How has the United States responded?

While Biden has expressed some wariness about Pelosi’s trip, the administration has not openly opposed it and said it is up to Pelosi to decide whether to go.

Ahead of Pelosi’s visit, the American military increased its movements in the Indo-Pacific region. The aircraft carrier USS Ronald Reagan and its strike group were in the Philippine Sea on Monday, according to officials who spoke on condition of anonymity to discuss military operations.

The Reagan, the cruiser USS Antietam and the destroyer USS Higgins left Singapore after a port visit and moved north toward their home port in Japan. The carrier has an array of aircraft, including F/A-18 fighter jets and helicopters, as well as sophisticated radar systems and other weapons.

Is armed conflict a risk?

Chinese President Xi Jinping and Biden both have made clear they don’t want that. In a call with Biden last week, Xi echoed a theme of Biden’s —their countries should cooperate on areas where they can.

The biggest risk is likely an accident if China tries the kind of provocative maneuver it’s increasingly been executing with other militaries around the South China Sea. Those include close fly-bys of other aircraft or confronting vessels at sea.

However, when it comes to the United States, with the world’s strongest military, “despite a chorus of nationalistic rhetoric, China will be careful not to stumble into a conflict with colossal damages on all fronts,” said Yu Lie, a senior research fellow at the Chatham House think tank.

For China, the best approach is patience and time, Jie said — building toward the day when its economy and military could be too big for the U.S. to challenge.