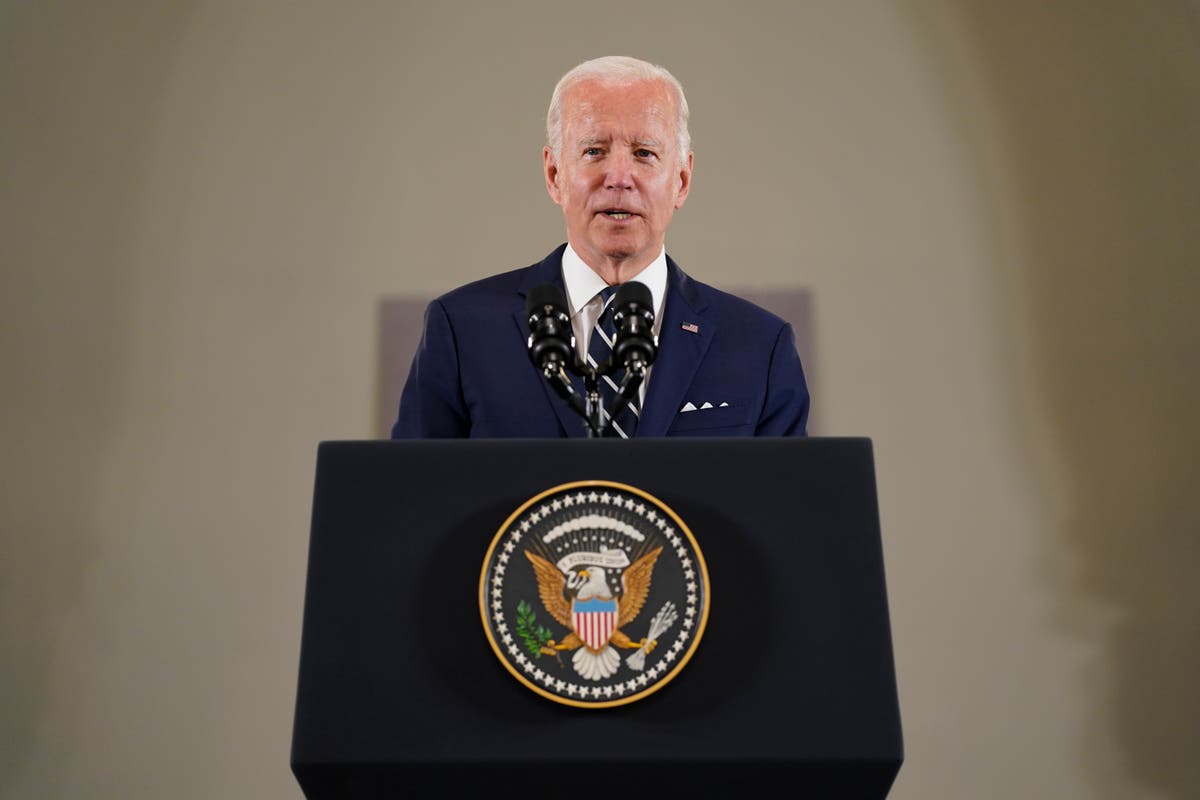 President Joe Biden attempted to repair ties with Palestinians before heading to Saudi Arabia in the final leg of his four-day trip to the Middle East.

Without a clear path for jumpstarting peace talks between Israelis and Palestinians, the president offered $100m as a balm while visiting a local hospital today.

After meeting Palestinian authority president Mahmoud Abbas in Bethlehem, Mr Biden is expected to fly to Saudi Arabia for a highly-anticipated meeting with the Saudi king and crown prince. The visit will be closely watched amid tensions over energy supply, human rights and security cooperation.

The trip is also designed to reset the US’ relationship with a country he once pledged to make a “pariah” on the world stage.

Ahead of the visit, Saudi announced that it would open its airspace to all air carriers, paving the way for more overflights to and from Israel. Mr Biden described it as a historic and important step towards building a more integrated and stable Middle East.

Hatice Cengiz, the fiancee of murdered Saudi journalist Jamal Khashoggi, described Joe Biden’s decision to visit Saudi Arabia as “heartbreaking,” accusing the US president of backing down from his pledge of prioritising human rights.

In an interview with The Associated Press in Istanbul a day before Biden travels to Saudi Arabia Friday to meet with the crown prince, Cengiz said Biden should press Saudi Arabia — a country that she described as a “terrible ally” — to embrace a human rights agenda. She also wants Biden to seek more answers from Saudi authorities over what happened to Khashoggi’s remains.

Hatice Cengiz, the fiancee of murdered Saudi critic Jamal Khashoggi, is describing Joe Biden’s decision to visit Saudi Arabia as “heartbreaking,” accusing the U.S. president of backing down from his pledge of prioritizing human rights

President Joe Biden on Thursday offered a wholehearted endorsement to the Abraham Accords, a series of normalisation agreements between Israel and several Middle East monarchies brokered during the Trump administration. Mr Biden added that he would work to expand the efforts under his predecessor to deepen ties between Israel and its neighbours.

Iran military warns US against threats of use of force

The Iranian military warned the United States and Israel on Friday against threatening Tehran with force, local media reported after US president Joe Biden said he would use force as a last resort to prevent the country from getting a nuclear weapon.

“The Americans and Zionists (Israel) know very well the price for using the word ‘force against Iran’,” Brigadier General Abolfazl Shekarchi, spokesman for the Iranian armed forces, was quoted as saying by state media.

“Biden must have been drowsy when he threatened Iran,” he said, adding: “Watch your soldiers’ pants – they might get wet in the Persian Gulf!”

Asked by Israeli television this week whether his past statements that he would prevent Tehran from obtaining a nuclear weapon meant he would use force against Iran, Biden replied: “If that was the last resort, yes.”

US president Joe Biden has announced $100m in American assistance for east Jerusalem hospitals that serve as “the backbone” of healthcare for Palestinians.

He spoke on Friday during a visit to the Augusta Victoria Hospital, which provides advanced medical care including radiation treatment for cancer patients and paediatric kidney dialysis to Palestinians in the occupied West Bank and Gaza.

The funding is subject to approval by the US Congress and would be paid out over several years.

Voices: Welcome to Israel, President Biden. As a member of the Knesset, I have a request

In an article exclusively for The Independent, Aida Touma-Sliman, a member of the Israeli Knesset has a plea for Joe Biden: “We need to talk about the Palestinian people, even if you’d rather not.”

When Joe Biden travels to Bethlehem he will be greeted by large billboards emblazoned with the words: “Mr President, this is apartheid,” alongside a map of what is left of the disconnected Palestinian territories — a stunt arranged by Israeli human rights group B’Tselem.

Richard Hall reports on how some of the world’s leading human rights groups have condemned Israel for committing what the president opposed so fiercely as a senator in the 1980s and how he is accused of ignoring it today.

Biden was a critic of South African apartheid. Where does he stand on Israel today?

Several of the world’s leading human rights groups have accused Israel of committing the crime of apartheid, writes Richard Hall

Biden: ‘Not going to wait forever’ for Iran to reenter nuclear agreement

US President Joe Biden on Thursday warned that the negotiations meant to bring Iran back into the 2015 Joint Comprehensive Plan of Action nuclear agreement cannot be allowed to drag on indefinitely.

Speaking at a press conference alongside Israeli Prime Minister Yair Lapid, Mr Biden was asked if he’d set a deadline for when he might walk away from the talks, which the US is hoping will re-start the agreement which former president Donald Trump walked away from in 2018.

“We’ve laid out for the people for the leadership of Iran, what we’re willing to accept in order to get back to the JCPOA,” Mr Biden said. “We’re waiting for the response. When that will come, I’m not certain. But we are not going to wait forever.”

Andrew Feinberg has more on the president’s comments.

President Joe Biden on his trip to Saudi Arabia will encourage peace and press for a more integrated Middle East.

“We will be covering a host of bilateral and regional issues, really capping many months of diplomacy and positioning the United States and our partners for the future in a manner that advances our interests and theirs,” a senior Biden administration official told Reuters.

The Saudi envoy said US-Saudi efforts to ensure peace and security should focus on enhancing cooperation and “reinforcing a rules-based system” to confront the “vision of chaos promoted by Iran”.

Gulf states share Israel’s concerns about Iran’s nuclear and ballistic missiles programmes and Tehran’s proxies in the region where Saudi Arabia and Shi’ite Iran have vied for influence.

During his visit to Israel on the first leg of the Middle East trip, Mr Biden and prime minister Yair Lapid signed a joint pledge to deny Iran nuclear arms, which Tehran denies seeking.

A rematch with Trump? Biden ‘would not be disappointed’

US president Joe Biden has expressed confidence about a possible rematch with Donald Trump in 2024 and said he would not be “disappointed” if that were to happen.

“I’m not predicting, but I would not be disappointed,” Mr Biden said in an interview with Israeli television outlet Channel 12 on Wednesday.

When pressed further on what he meant, the president said: “The one thing I know about politics — and American politics in particular — is there’s no way to predict what’s going to happen.

President Joe Biden will discuss energy supply, human rights and security cooperation in Saudi Arabia on today on a trip designed to reset the US relationship with the country he once pledged to make a “pariah” on the world stage.

The visit is also being closely watched as US intelligence had concluded that the crown prince directly approved the 2018 murder of Washington Post columnist Jamal Khashoggi. But he had denied playing a role in the incident.

White House advisers have declined to comment on whether Mr Biden will shake hands with the prince.

“The president’s going to meet about a dozen leaders and he’ll greet them as he usually does,” the administration official said.