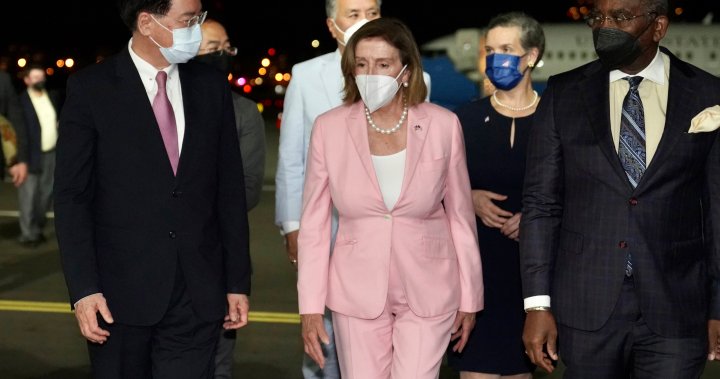 Taiwan‘s military said Wednesday that Chinese military exercises around its main island are an attempt to threaten its ports and urban areas as U.S. Speaker Nancy Pelosi visits the island.

Taiwan’s Ministry of National Defense said in a translated statement that China’s “announcement of its plan to conduct military drills in the sea and airspace around Taiwan’s main island is an attempt to threaten our important ports and urban areas, and unilaterally undermine regional peace and stability.”

China announced the military operations not long after U.S. Speaker Nancy Pelosi landed in Taiwan on Tuesday. She is the highest-raking U.S. official to visit the self-ruled island in 25 years.

China said it would begin conducting military drills Tuesday evening in the waters and skies near Taiwan. The drills include firing long-range ammunition in the Taiwan Strait.

“This action is a solemn deterrent against the recent major escalation of the negative actions of the United States on the Taiwan issue, and a serious warning to the `Taiwan independence’ forces seeking `independence,”’ China’s People’s Liberation Army said.

The army plans live-fire drills from Aug. 4 to 7, according to China’s official Xinhua News, and are to take place in six different areas in the waters surrounding Taiwan.

The U.S. has for decades upheld a “One China” policy towards Taiwan that recognizes Beijing but allows informal relations and defense ties with Taipei.

John Kirby, spokesman for the National Security Council, said Tuesday that U.S. President Joe Biden is in support of Pelosi’s trip and it is consistent with the U.S.’s longstanding policy. He said China has positioned itself to take further steps in reaction to the trip.

“We expect them to continue to react over a longer-term horizon,” he said, noting the U.S. will “not engage in saber-rattling.”

The two foundations are Taiwan Foundation for Democracy and Taiwan International Cooperation and Development Fund.

Pelosi began a visit to Taiwan’s Parliamentary Wednesday and said she hopes there will be an increase in parliamentary exchanges between the U.S. and Taiwan.