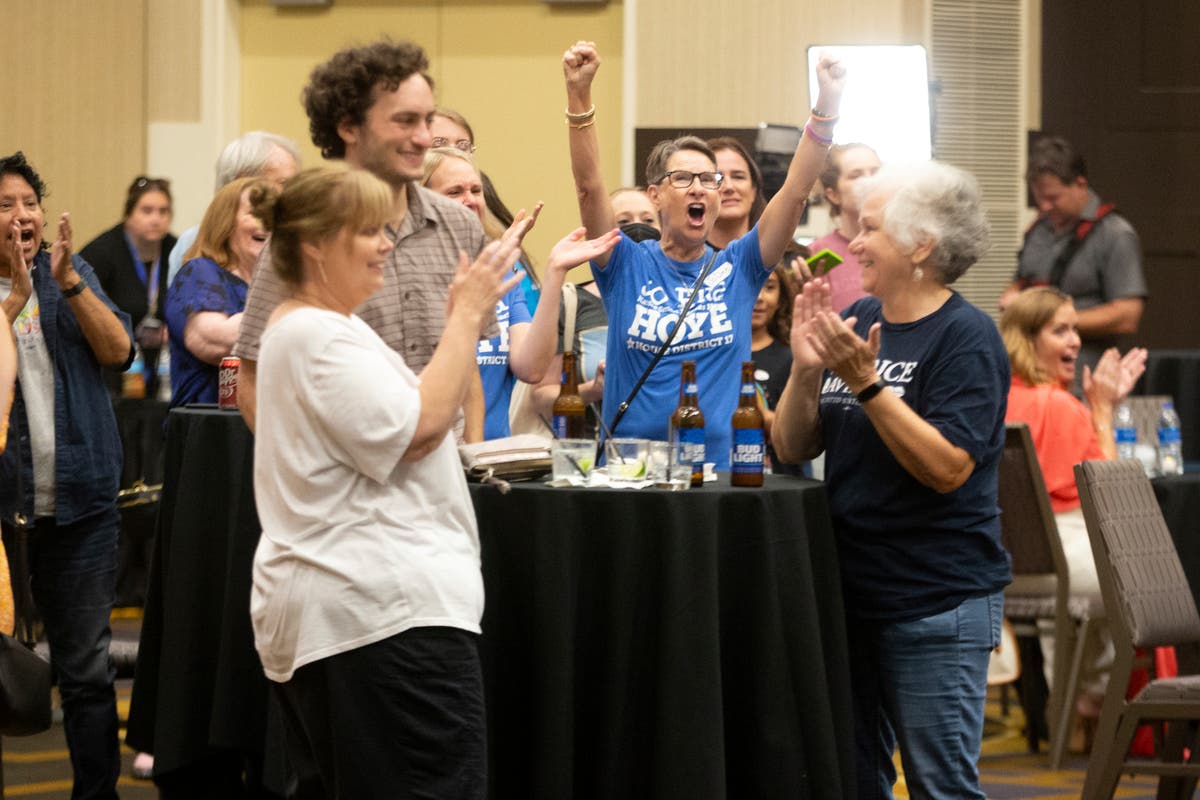 In one of the biggest days of this year’s primary campaign season, voters rejected a measure that would have made it easier to restrict abortion rights in red-state Kansas and repudiated a scandal-tarred former governor seeking a U.S. Senate seat in Missouri.

Meanwhile, a political newcomer emerged from Michigan’s messy Republican gubernatorial primary, setting up a rare woman-vs.-woman general election matchup between conservative commentator Tudor Dixon and incumbent Democratic Gov. Gretchen Whitmer. And a Democratic congressman was ousted from Congress after redistricting forced him into the same primary as a fellow incumbent.

Kansas may seem like an unlikely place for abortion rights supporters to notch a major victory.

But on Tuesday, voters in the conservative state resoundingly rejected a constitutional amendment that would have allowed the Legislature to ban abortion. It was the first major test of voter sentiment since the Supreme Court ruling in June to rescind the 1973 Roe v. Wade decision that legalized abortion nationwide.

The amendment would have allowed the Legislature to overturn a 2019 state Supreme Court decision declaring access to abortion a “fundamental” right under the state constitution.

Its failure at the ballot in a state Donald Trump won by nearly 15 points issues a stark warning to Republicans, who have downplayed the political impact of the high court’s ruling. It also hands a considerable win to Democrats, who are feeling newly energized heading into what was expected to be a tough midterm election season for them.

Kansas currently allows abortion until the 22nd week of pregnancy. After that, abortion is allowed only to save a patient’s life or to prevent “a substantial and irreversible physical impairment of a major bodily function.”

Gov. Laura Kelly, a Democrat who supports abortion rights, has warned that the Republican-led Legislature’s efforts to ban abortion would hurt the state. On Tuesday it became clear than many voters agree with her.

Democratic hopes of picking up a U.S. Senate seat in deep-red Missouri faltered Tuesday after Republican voters selected Attorney General Eric Schmitt as their nominee over former Gov. Eric Greitens, who resigned in disgrace in 2018.

Greitens, they predicted, would be toxic in a general election. Democrats landed a strong recruit in beer heir Trudy Busch Valentine, who won her primary Tuesday. And the state’s Republican establishment prepared to put millions of dollars behind an independent candidate in the general election, potentially fracturing the GOP vote.

But Greitens came on short Tuesday, finishing in a distant third behind Schmitt and U.S. Rep. Vicky Hartzler. His campaign’s tailspin can likely be traced back to March, when his ex-wife submitted a bombshell legal filing in the former couple’s child custody case.

Sheena Greitens said in a sworn statement that Eric Greitens had abused her and one of their young sons. She also said he displayed such “unstable and coercive behavior” in the lead-up to his 2018 resignation that others took steps to limit his access to firearms.

At the time, Greitens faced potential impeachment after his former hairdresser testified that he blindfolded and restrained her in his basement, assaulted her and appeared to take a compromising photo to pressure her to keep quiet about an affair.

He resigned from office — and avoided testifying under oath about the affair.

He launched his comeback campaign for Senate last year, marketing himself as an unabashedly pro-Trump conservative. And while many in Missouri wrote him off, one important political figure didn’t: Donald Trump, who mused publicly about Greitens’ attributes.

But in the end, Trump stopped short of issuing an endorsement, instead issuing a vague statement this week throwing his support behind “ERIC.”

And on Tuesday, the other “ERIC” in the race — Schmitt — won.

At its essence, Michigan’s raucous Republican gubernatorial primary was a contest of which candidate’s personal baggage was the least disqualifying. On Tuesday, conservative media personality Tudor Dixon was the victor, setting up a November general election against Democratic Gov. Gretchen Whitmer in the battleground state.

Dixon’s past as an actor in a series of vulgar and low-budget horror movies became a campaign issue. But her career moonlighting in titles such as “Buddy BeBop Vs. the Living Dead” and a vampire TV series called “Transitions” paled in comparison to her rivals’ problems.

One of them, Ryan Kelley, faces federal misdemeanor charges after he was recorded on video in Washington during the Jan. 6 insurrection directing a mob of Trump supporters toward a set of stairs leading to the U.S. Capitol. Kelley has pleaded not guilty.

Another, Kevin Rinke, is a former car dealer who settled a series of lawsuits in the 1990s after he was alleged to have made racist and sexist comments, which included calling women “ignorant and stupid” and stating that they “should not be allowed to work in public.”

A third, Garrett Soldano, is a chiropractor and self-help guru who has sold supplements he falsely claimed were a therapeutic treatment for the coronavirus.

Many in the state’s Republican establishment, including billionaire former Trump education secretary Betsy DeVos, view Dixon as their best shot at defeating Whitmer. Trump endorsed Dixon in the race Friday, just a few days before the primary.

But her primary victory is an outcome few would have predicted months ago. In addition to the shortcomings of her rivals, her path was cleared when the two best-known candidates in the race were kicked off the ballot in May for submitting false petition signatures.

Redistricting forced two Democratic House incumbents into a bitter primary in eastern Michigan. But massive spending by the pro-Israel lobby is what may have doomed Rep. Andy Levin, a former president of his synagogue, in the race Tuesday against Rep. Haley Stevens for a suburban Detroit congressional seat.

Stevens, who attends a nondenominational megachurch in the city of Troy, was buoyed by more than $4 million in advertising spending by the United Democracy Project, a super PAC launched by the American Israel Public Affairs Committee, commonly called AIPAC.

The ads amplified Stevens’ campaign message, but some also attacked Levin. But it’s hardly a surprise that the group, which is partially funded by two billionaire Republican megadonors, went after Levin despite his Jewish faith.

Levin, a progressive member of the House Foreign Affairs Committee, has been highly critical of Israel’s record on human rights and what he has called the country’s “deliberate campaign to dilute the Palestinian population.” He’s also just the latest congressional Democrat who has been defeated following a spending blitz by the group, which has poured at least $24 million into federal races this year.