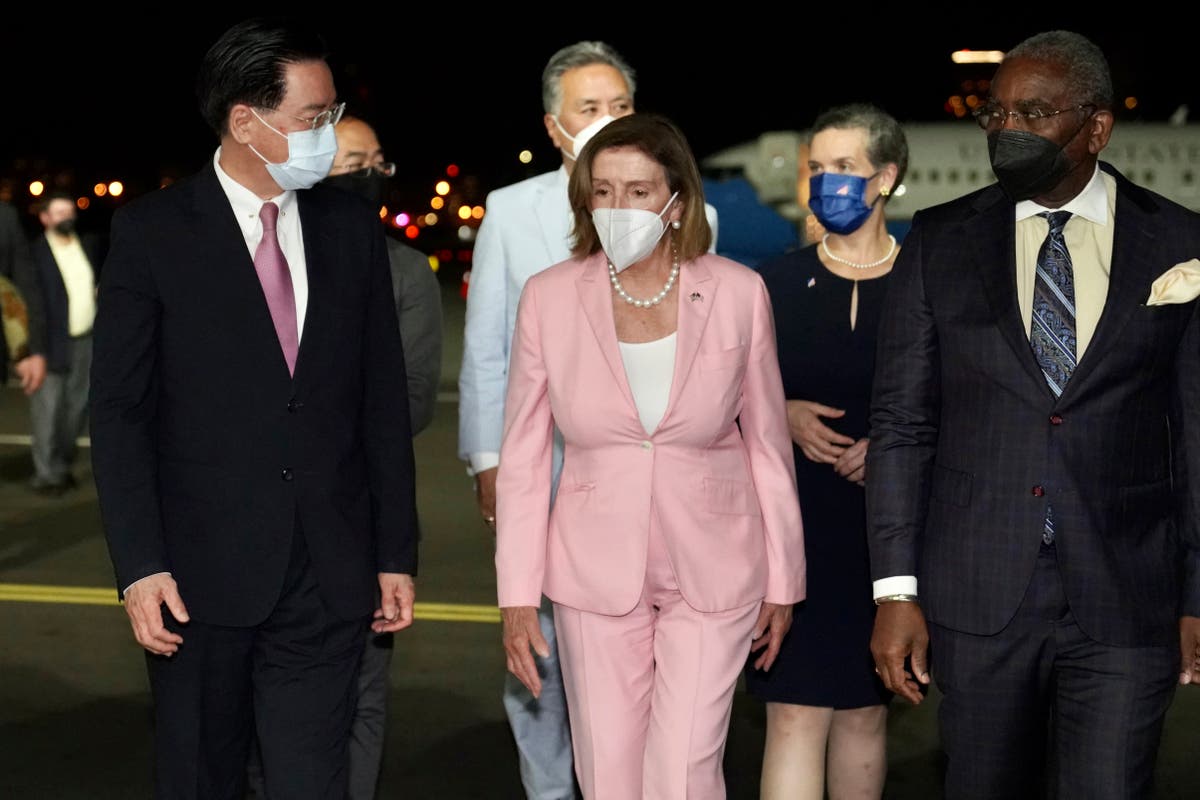 Tensions are high across the region as US House of Representatives speaker Nancy Pelosi reached Taiwan and met president Tsai Ing-wen on Wednesday, with Chinese warplanes flying close to the median line of the sensitive Taiwan Strait.

“Today, our delegation… came to Taiwan to make unequivocally clear we will not abandon our commitment to Taiwan and we are proud of our enduring friendship,” Ms Pelosi said during her meeting with the Taiwanese president.

Meanwhile, the Taiwanese military has increased its alertness level as Chinese warships and aircraft “squeezed” the median line on Tuesday morning. The foreign ministry condemned Ms Pelosi’s trip as “playing with fire” and confirmed they will hold live fire exercises off the coast of Taiwan.

In an op-ed published in The Washington Post by Ms Pelosi, the speaker describes the visit as being “an unequivocal statement that America stands with Taiwan, our democratic partner, as it defends itself and its freedom”.

The visit to Taiwan is the most senior by a US politician since then-House speaker Newt Gingrich went there in 1997.

Taiwan has enhanced alertness levels and will react timely and appropriately to the drills, a defence ministry spokesman told reporters via a voice message.

Tsai thanks Pelosi for support, says Taiwan will not back down

Taiwanese president Tsai Ing-wen thanked visiting US House speaker Nancy Pelosi today for her concrete actions to support Taiwan at this critical moment and said the island will not back down in the face of heightened military threats.

Ms Tsai also told Ms Pelosi that she is one of Taiwan’s most devoted friends and thanked her for her unwavering support on the international stage.

She added that Taiwan is a reliable partner of the United States and will continue to work with the US to strengthen collaboration in security, economic development and supply chains.

Why is Nancy Pelosi’s trip to Taiwan so contentious?

House Speaker Nancy Pelosi’s visit to Taiwan, the highest-level trip by a US official in 25 years, has sparked a diplomatic crisis between the US and China.

Beijing warned the United States that it was “playing with fire” if it allowed the speaker’s visit to take place, and even Joe Biden had cautioned against it.

So why is Ms Pelosi’s trip so controversial?

Taiwan, a self-governing democracy of approximately 23 million off the coast of China, has become a flashpoint in the growing geopolitical struggle between Washington and Beijing.

Taiwan has its own democratic political system, constitution, and military, and many Taiwanese consider the island to be a separate nation to China. But Beijing considers Taiwan a breakaway province that will eventually come under its control — by force if necessary.

Rirchard Hall has more for The Independent.

Why is Nancy Pelosi’s trip to Taiwan so contentious?

Taiwan’s cabinet has said the military has increased its alertness level and authorities will make plans to ensure safety and stability around the island, after China announced a series of military exercises in response to US House Speaker Nancy Pelosi’s arrival in Taipei.

Taiwan’s cabinet also said its citizens should feel reassured and that a national stabilisation fund for the stock market will closely watch the situation and react in a timely manner.

Nancy Pelosi explains why she gambled on big Taiwan trip

As House Speaker Nancy Pelosi landed in Taipei, Taiwan for a visit that’s been heavily criticised by the Chinese Communist Party (CCP), The Washington Post published an op-ed by Ms Pelosi in which she says that the “visit should be seen as an unequivocal statement that America stands with Taiwan, our democratic partner, as it defends itself and its freedom”.

Ms Pelosi opened the opinion piece by noting that the Taiwan Relations Act was passed 43 years ago, calling it “one of the most important pillars of US foreign policy in the Asia Pacific”.

The speaker wrote that the legislation “set out America’s commitment to a democratic Taiwan, providing the framework for an economic and diplomatic relationship that would quickly flourish into a key partnership”.

Gustaf Kilander has the full story.

ICMYI: Why even Republicans are supporting Nancy Pelosi’s Taiwan trip

Nancy Pelosi arrived in Taiwan for a controversial visit on Tuesday. While she was greeted by dignitaries and crowds of waiting onlookers in Taipei, her visit has prompted both praise and controversy in the US, China, and beyond.

Perhaps most unexpectedly, a group of 26 Senate Republicans have voiced their support for the House Speaker’s visit to Taiwan, despite China’s warnings that the trip would prompt “disastrous consequences.”

“For decades, members of the United States Congress, including previous Speakers of the House, have traveled to Taiwan,” the Senators said in a statement of support. “This travel is consistent with the United States’ One China policy to which we are committed. We are also committed now, more than ever, to all elements of the Taiwan Relations Act.”

Catch up on the politics surrounding the House Speaker’s trip to Taiwan.

EXPLAINER: Why Pelosi went to Taiwan, and why China’s angry

When House Speaker Nancy Pelosi flew into Taiwan on an Air Force passenger jet Tuesday, she became the highest-ranking American official in 25 years to visit the self-ruled island. China announced military maneuvers in retaliation, even as Taiwanese officials welcomed her and she headed to her hotel.

The reason her visit ratcheted up tension between China and the United States: China claims Taiwan as part of its territory, and it views visits by foreign government officials as them recognizing the island’s sovereignty.

More context in this explainer.

EXPLAINER: Why Pelosi went to Taiwan, and why China’s angry

The House of Representatives Speaker’s trip is the first visit by a US speaker to the country since 1997.

Ms Pelosi has been a vocal critic of Chinese leadership and previously said it is “important for us to show support for Taiwan”.

Here’s our report on the encounter.

Taiwan officials said that 21 Chinese military aircraft entered its air defence zone on Tuesday, 2 August, as Nancy Pelosi arrived on an historic visit.The House of Representatives Speaker’s trip is the first visit by a US speaker to the country since 1997.Ms Pelosi has been a vocal critic of Chinese leadership and previously said it is “important for us to show support for Taiwan”.“21 PLA aircraft entered Taiwan’s southwest [Air Defence Identification Zone] on August 2, 2022,” Taiwan’s defence ministry said.Click here to sign up for our newsletters.

US plans to block Chinese access to chip design software

The US is planning to prevent Chinese access to special software for designing semiconductors that go into hyper-advanced AI chips.

It’s the latest attempt by America to prop up its own advanced computing industries and prevent China from gaining an edge in emerging technologies like AI.

The Biden administration has spent months considering the policy, which is now under review by the Office of Management and Budget, Protocol reports.

Congress is working on legislation to make the US semiconductor more competitive, as Eric Garcia reports.

The legislation passed on a bipartisan basis

House Speaker Nancy Pelosi has been a longtime critic of China’s record on human rights and political freedoms.

In 1991, she memorably unfurled a pro-democracy banner in Tiananmen Square shortly after the student massacre.

Here’s some of our past coverage on the California representative’s stance on China.

Pelosi to Taiwan would be career capstone, despite warnings

US House Speaker Nancy Pelosi, long a fierce critic of Beijing, toured China’s financial capital on Monday on a visit focused on environmental issues rather than human rights, though her presence emboldened protesters.