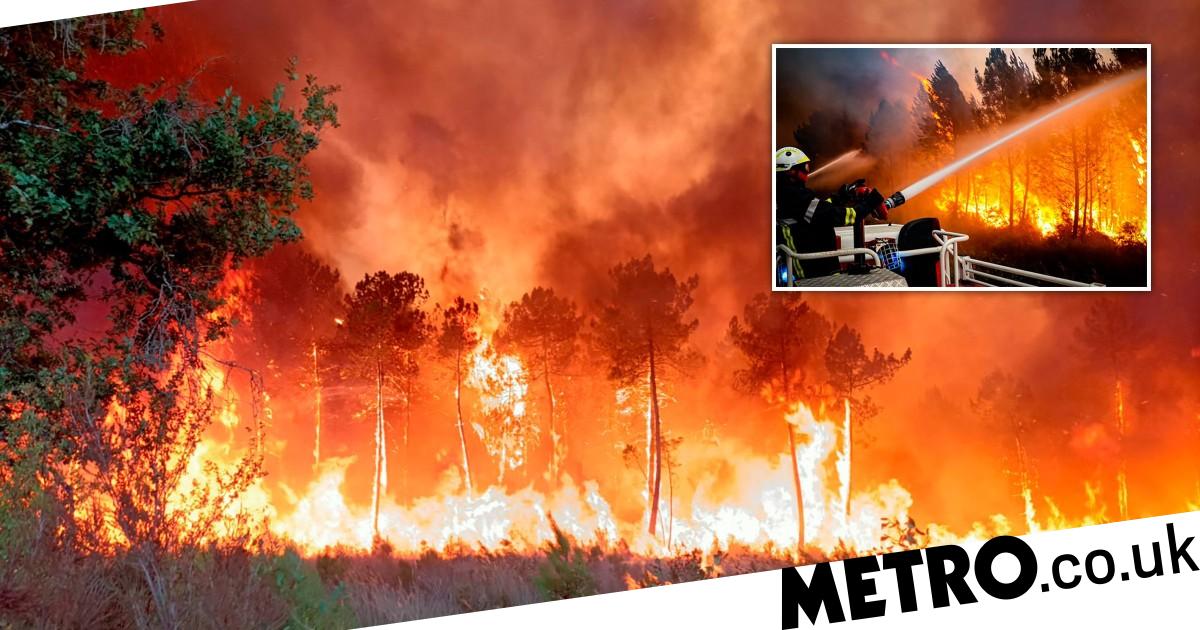 Thousands of people have been evacuated after people described being chased by the ‘devil’ as wildfires raged towards them.

Thousands of acres of land across France are currently ablaze in two different locations, fuelled by tinderbox conditions from the extreme heatwave Europe is currently experiencing.

The Bordeaux region has been particularly badly hit with out-of-control fires raging through national forests and close to the Dune du Pilat – a huge sand dune in western France.

Around 10,000 tourists have been evacuated from campsites as the fire races towards them. from surrounding campsites on Wednesday, and another 4,000 people early on Thursday.

Overnight three homes and two restaurants were destroyed by the fire as crews struggle to contain the flames.

Wildfires have also raged across Portugal, Spain and Croatia, where the heat has been described as ‘suffocating.’

The exclusive neighbourhood of Quinta do Lago, where celebrities such as Duncan Bannatyne and John Terry have homes, is among the areas in Portugal to be worst affected by fires.

One devasted local described the flames as ‘looking like the devil’.

Much of Europe has shared a heatwave that has pushed temperatures into the mid-forties in some parts.

The mercury is rising well above average for July, and has even hit 47°C in Ourense, northern Spain.

Clare Nullis, a World Meteorological Organisation spokesperson, told a United Nations briefing that although the heatwave was mainly affecting Portugal and Spain, it was likely to spread elsewhere.

‘It is affecting large parts of Europe and it will intensify,’ she warned.

Fears are also growing for the Balkans as extended drought conditions sweep through Greece and Bulgaria.