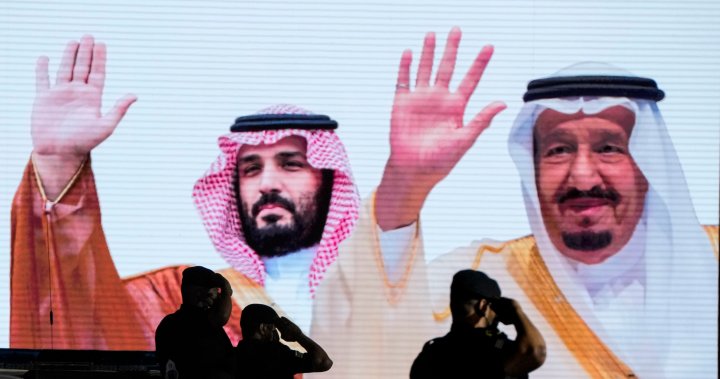 Whether Joe Biden’s first trip to the Middle East as president ends a success or a failure may hinge on what happens when the American leader first locks eyes with Saudi Arabia’s crown prince, Mohammed bin Salman.

The world will be watching the highly anticipated meeting Friday to see if the gaffe-prone U.S. president and notoriously vengeful Saudi prince can begin repairing a rift between the two strategic partners, with the ebb and flow of the world’s oil supply hanging in the balance.

There’s been considerable speculation about both the choreography and the substance of how Biden, who had vowed as a presidential candidate to treat the Saudis as a “pariah” for their human rights record, will go about interacting with the crown prince.

Asked Thursday whether he would raise the 2018 killing of Jamal Khashoggi, a U.S.-based journalist and critic of the kingdom, with the crown prince, Biden didn’t give a direct answer.

The Democratic president last year approved the release of a U.S. intelligence finding that determined the crown prince, known as MBS, likely approved Khashoggi’s killing. The release of the report caused a further rupture in U.S.-Saudi relations.

“My views on Khashoggi have been absolutely, positively clear. And I have never been quiet about talking about human rights,” Biden said. “The reason I’m going to Saudi Arabia, though, is much broader. It’s to promote U.S. interests — promote U.S. interests in a way that I think we have an opportunity to reassert what I think we made a mistake of walking away from: our influence in the Middle East.”

Biden arrives in the Red Sea port city of Jeddah on the third day of a four-day swing through the Middle East. He spent the first two days meeting with Israeli officials and traveled to the West Bank on Friday to meet with Palestinian Authority President Mahmoud Abbas and others before flying to Saudi Arabia.

Once in Jeddah, Biden will meet with Saudi King Salman and then hold a larger working meeting that is to include Prince Mohammed and other senior Saudi officials as well as the president’s top advisers.

Asked if Biden would shake hands with MBS, a senior administration official demurred and noted the Biden White House is “focused on the meetings, not the greetings.”

The Saudis did make a step toward normalization of relations with Israel before Biden’s visit, announcing early Friday that it was opening its airspace to “all air carriers,” signaling the end of its longstanding ban on Israeli flights flying over its territory.

Biden hailed the decision as “an important step towards building a more integrated and stable Middle East region,” adding that the decision “can help build momentum toward Israel’s further integration into the region, including with Saudi Arabia.”

Biden also will take part in a Saturday gathering of leaders from the Gulf Cooperation Council —Bahrain, Kuwait, Oman, Qatar, Saudi Arabia and the United Arab Emirates — before returning to Washington. The leaders of Mideast neighbors Egypt, Iraq and Jordan are also to attend.

The Saudi visit is one of the most delicate that Biden has faced on the international stage. Any kind of respectful greeting that Biden can manage, and the Saudi crown prince can reflect back, might help both sides soothe relations.

But it could also open Biden, already floundering in the polls at home, to deeper criticism that he is backtracking on his pledges to put human rights at the center of foreign policy.

0:38
Report calls on Canada to cancel permits for arms exports to Saudi Arabia

Khashoggi’s fiancee, Hatice Cengiz, said that, with the visit to Saudi Arabia, Biden was backing down on human rights.

“It’s a very huge backing down actually,” Cengiz told The Associated Press in an interview Thursday. “It’s heartbreaking and disappointing. And Biden will lose his moral authority by putting oil and expediency over principles and values.”

Biden’s criticism of the Saudis as a candidate became more tempered in recent months as Russia’s war on Ukraine aggravated what was already a global supply crunch for oil and gas. Elevated gasoline prices have driven inflation in the United States to its highest levels in four decades.

Saudi political analyst Turki al Hamad said he was not optimistic about the prospects for Biden’s trip.

“Biden and his team will come and set their eyes on the U.S. elections, and improving the Democrats’ situation by coming out with an agreement on increasing oil production,” Hamad tweeted, saying that “does not matter to the Saudi leadership.”

Aaron David Miller, a senior fellow at the Carnegie Endowment for International Peace and former U.S. State Department official, said Biden is looking forward to visiting Saudi Arabia “like I would look forward to a root canal operation.”

Miller contrasted Biden with his predecessor, President Donald Trump, who visited Saudi Arabia on his first foreign trip. That trip was highlighted by a mystifying photo op of the leaders gathered around a glowing orb and Trump briefly joining a ceremonial sword dance.

With Biden and Prince Mohammed, “there aren’t going to be a lot of sword dances, or smiling photo ops, or warm embraces,” Miller said.