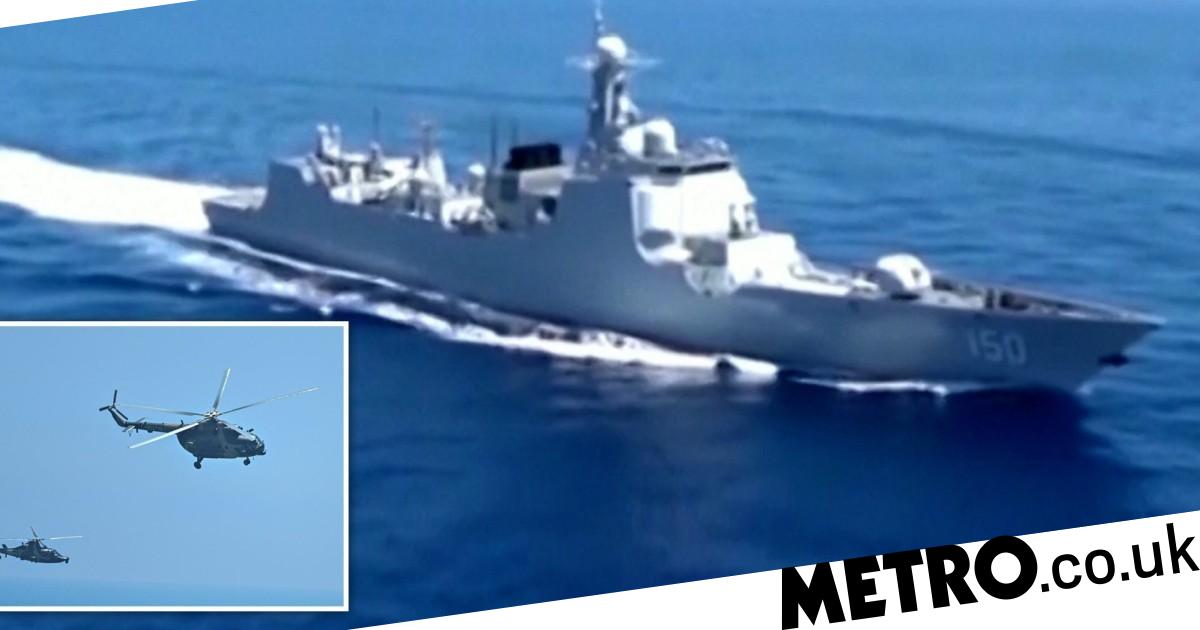 Amid a dramatic escalation of tensions and fears of an ‘accidental war’ with the USA, the Asian superpower has started a naval blockade around the contested island, threatening trade and travel.

The drills have already led to airlines announcing that they will avoid the area, as fears mount of a further escalation.

Taiwan wants to be a self-governing nation, but China sees the area as a breakaway region and has repeatedly threatened to take it by force, leading to fears of an invasion similar to Russia’s war on Ukraine.

Taiwan is hopelessly outgunned but the USA says it will defend Taiwan’s right to self-determination.

Ms Pelosi, whose visit was branded ‘irrational and manic’, met Taiwanese leaders yesterday and made a speech about solidarity with the island.

Pictures have emerged of tanks on a beach near Taiwan, a huge build-up of naval ships off Taiwan and various military aircraft, including at least 27 fighter jets and a number of helicopters.

‘Six major areas around the island have been selected for this actual combat exercise and during this period, relevant ships and aircraft should not enter the relevant waters and airspaces’, broadcaster CCTV reported.

The exercises will take place in multiple zones around Taiwan – at some points within just 20 kilometres (12 miles) of the shore – and will conclude at midday on Sunday.

Beijing’s Global Times newspaper cited military analysts saying that the exercises were ‘unprecedented’ and that missiles would fly over Taiwan for the first time.

‘This is the first time the (Chinese military) will launch live long-range artillery across (the Taiwan Strait)’, it reported.

Taiwan’s defence ministry said it was closely watching the drills.

‘The Ministry of National Defence stresses that it will uphold the principle of preparing for war without seeking war, and with an attitude of not escalating conflict and causing disputes,’ it said.

The Group of Seven industrialised nations has condemned the drills, saying in a statement there was ‘no justification to use a visit as pretext for aggressive military activity in the Taiwan Strait’.

Taiwan’s Maritime and Port Bureau issued warnings on Wednesday to ships to avoid the areas being used for the Chinese drills.

The manoeuvres will take place along some of the busiest shipping routes on the planet, used to supply vital semiconductors and electronic equipment produced in East Asian factory hubs to global markets.

Hong Kong carrier Cathay Pacific said it had ordered its aircraft to ‘avoid going through the designated airspace zones around the Taiwan region’.

A Taiwanese source said about 10 Chinese Navy ships had crossed into the Taiwan straight and were still there at midday local time today.

On the mainland, at what is said to be China’s closest point to Taiwan, five military helicopters were seen flying at a relatively low altitude near a popular tourist spot.

A Chinese military source suggested the exercises would be staged ‘in preparation for actual combat’.

‘If the Taiwanese forces come into contact with the (Chinese military) on purpose and accidentally fire a gun, the PLA will take stern countermeasures, and all the consequences will be borne by the Taiwanese side,’ they said.

Beijing has defended the drills as ‘necessary and just’, blaming the escalation on the United States and its allies.

Ms Pelosi was the highest-profile elected US official to visit Taiwan in 25 years, and said her trip made it ‘unequivocally clear’ that the United States would not abandon a democratic ally.

That sparked a furious reaction from Beijing, which vowed ‘punishment’ and announced the drills

Wang, speaking from Cambodia, claimed China has made the utmost diplomatic effort to avert crisis, but would never allow its core interests to be hurt.

Taiwan’s 23 million people have long lived with the possibility of an invasion, but threatening rhetoric has been ratcheted to new levels in recent days.

Experts have suggested that China is not aiming to escalate the situation beyond its control – for now at least.

She said: ‘I do not support China’s inflammatory language on this issue.

‘It’s perfectly reasonable what is taking place and I urge China to de-escalate.’


MORE : China storms beach near Taiwan and vows to ‘fight to the death’ amid US tensions