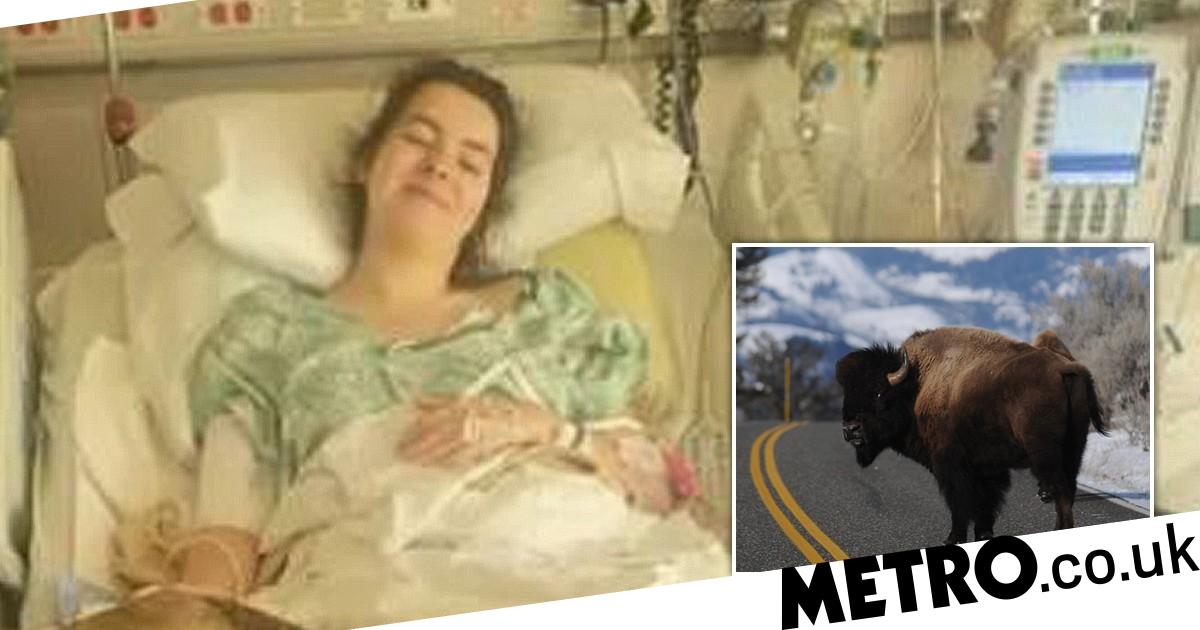 A British student has been left partially paralysed after a terrifying bison attack.

Amelia Dean, known as Mia, was thrown into the air by the animal after it gored her leg.

Ms Dean, from Brockham in Surrey, had only recently arrived in America at the time of the attack.

She was on the second day of a gap year across the country.

The 19-year-old, a friend and their dog had spotted the bison grazing nearly 100 feet away as they walked through the state park.

They were then ‘shocked into stillness’ as it suddenly turned and charged.

One of the bison’s horns pierced her left thigh as she fell to the ground bleeding.

She is now being treated in hospital following the animal’s attack.

Ms Dean told South Dakota’s KOTA TV: ‘I remember feeling the pressure on my hip, my hip being pushed back and I remember the sensation of flying in the air and going head over heels.

‘It’s a miracle I even lived until the ambulance got there, let alone kept my life and my leg.

‘I can’t walk without a walker or crutches. I can’t walk very far. About 20 metres and I’m done, for a long time.’

The bison, one of 1,500 in the reserve, had stood by Ms Dean following the incident.

It was then bravely led away from the injured teenager by her friend.

Ms Dean is being treated at Rapid City Hospital in South Dakota, where she is now paralysed with nerve damage below the left knee.

Her parents Matthew and Jacqueline flew to be at her side.

They stated: ‘Mia was shocked into stillness [and] the bison halted directly in front of her.

‘The two stared at each other for a few seconds before the bison surged forwards, goring her in the left thigh with his horn, and threw her head over heels about ten to 15 feet in the air.

‘When she hit the ground Mia was trapped, unable to move her bleeding leg, with the bison huffing directly over her, his feet by her head for some time.’

Mr and Mrs Dean are trying to raise £140,000 to transfer Ms Dean to the Mayo Clinic in Minnesota for specialist treatment.

Her parents added: ‘Mia is English and while her travel insurance has paid so far for the femoral artery bypass, they are refusing to pay for even the initial examination by the specialist of her nerve injury.

‘Mayo clinic, a world-class hospital in the peripheral nerve field – a very niche field – has accepted Mia as a referral from Rapid City Hospital.’

To donate to the Gofundme fundraiser, please visit here.