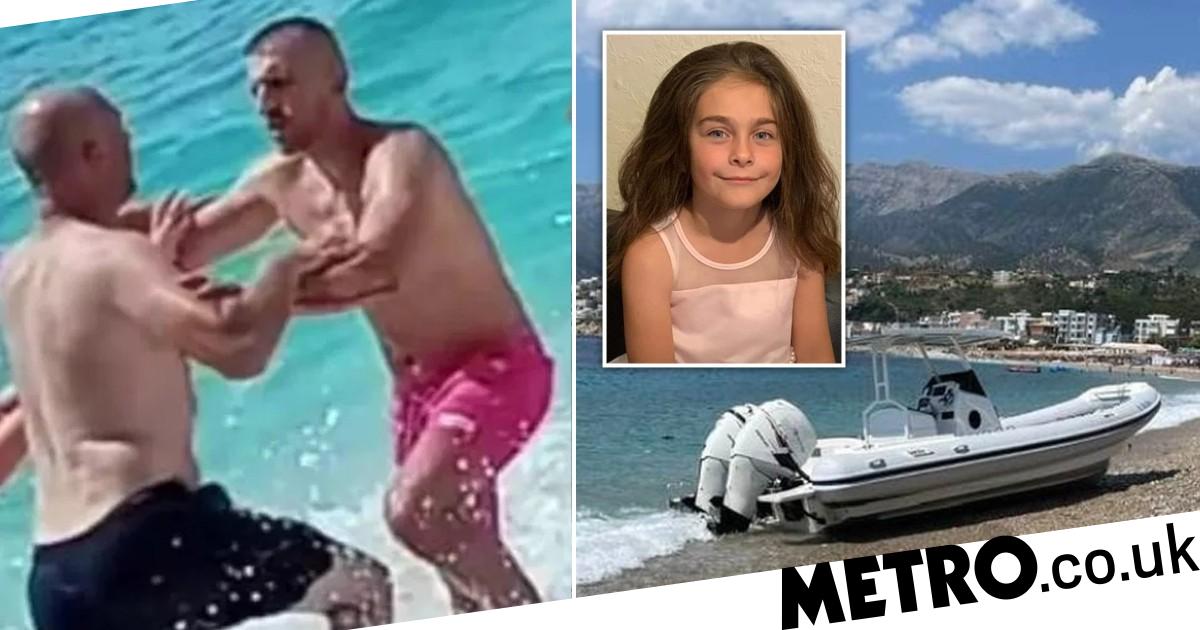 This is the heart-wrenching moment a dad who had just watched his daughter killed by a speedboat propeller brawls with the off-duty cop accused of killing the girl.

British-born Jonada Avdia, seven, was holidaying with father Bledar Avdia and her mother on Potami beach in their native Albania, when she was struck at ‘hellish’ speed 15ft offshore and killed around 2pm Tuesday.

Horrified onlookers captured the clash as officer Arjan Tase, now facing a manslaughter charge over the death, waded to shore and was faced with a raging Bledar – who said it should have been him who was killed.

Pictures show Tase in pink swimming shorts locking arms with the shattered dad in black trunks as onlookers raced to separate the pair.

Images of the clash were posted online by Albania’s former prime minister Sali Berisha, who claimed the boat had been previously used for drug trafficking.

Shattered dad Bledar told local media: ‘I was bathing together with my daughter near the shore, I saw a white boat with two people on board.

‘The boat parked on the beach near a hotel and I saw a girl get off from there.

‘It came in our direction and came at hellish speed and separated me and the girl.’

He went on about his rescue attempt: ‘I dived down under the water and the craft hit my daughter with the engine part, cutting her all over.

‘I saw that the vehicle left, but then the boatman came back, stopping the boat and coming to the shore.’

Teacher Bislim Ahmetajm who was on the beach the day of the death, said on Facebook Bledar approached him afterwards and said: ‘I should have died instead of her.’

Tase was arrested a short time after the face-off and told he would face court in the city of Vlora.

Investigators say he was taking relatives around five miles from Porto Palermo to Potam when the crash happened.

They add he drove through an area meant only for swimmers, clearly marked with buoys, and onto the beach.

After dropping off his family members he put the boat back into the water in the same area and is said to have pulled ‘dangerous manoeuvres’.

It was then he hurtled into Jonada as she was splashing in the water.

Tase is being investigated for ‘negligent homicide’, while 15 police officers have been sacked who were supposed to be guarding the water the day the girl was struck.

Hundreds of candles and flowers have been placed where Jonada, from Barking, east London, lost her life, as well as in front of the Prime Minister’s office.

Protests have also erupted across the country in fury at the death, with dozens of marchers clashing with police in the capital of Tirana.

They are calling for the resignation of Interior Minister Bledar Çuçi, Director General of the State Police Gledis Nanos, and Tourism Minister Mirela Kumbaro, accusing the state of killing Jonada.

It is the third such accident to happen on the beaches of Albania this summer.

A couple were last month injured by a speedboat on Jale beach, also in southern Albania, while a second seven-year-old child was hurt in a crash two days later.