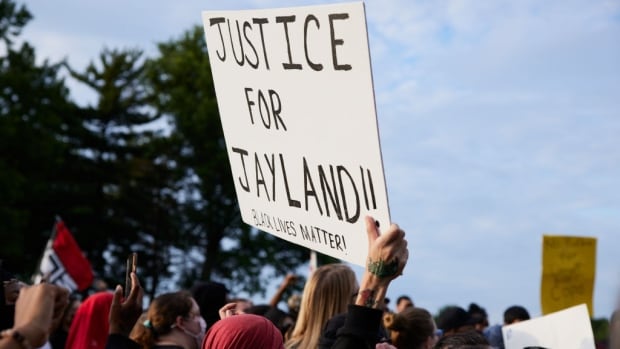 Jayland Walker, a 25-year-old Black man who died last month at the hands of police in Akron, Ohio, was shot dozens of times, with 26 bullets recovered from his body, according to a preliminary autopsy report released Friday.

Dr. Lisa Kohler, the Summit County medical examiner, said it was impossible for her office to say which bullet killed Walker or the number of shots that were fired.

Walker “had several very devastating injuries that would cause death,” including injuries to his heart, lungs and arteries, Kohler said. She tallied 41 entry wounds and five wounds from bullets that grazed Walker.

Walker had five wounds in his back, but it’s impossible to say whether those came as he ran away or turned as he was being shot, Kohler said.

The medical examiner gave a summary of the report into Walker’s death at a news conference. The report was finalized Thursday.

The June 27 pursuit began when officers tried to pull him over for equipment violations. Authorities say Walker fired a gunshot from his car 40 seconds into the chase.

The medical examiner’s findings confirm that Walker, unarmed and with no drugs or alcohol in his system, “came to a brutal, senseless death,” said Ken Abbarno, a lawyer representing Walker’s family.

Walker was remembered by family and friends during his Wednesday funeral as a shy, kind, thoughtful man with a quiet sense of humour. Another lawyer for his family, Bobby DiCello, previously said Walker had been grieving the recent death of his fiancée but that his family had no indication of concern beyond that.

DiCello has said Walker did not deserve to die and stated after Walker’s funeral service that he will hold police accountable for every round fired from their guns.

A message seeking comment on the autopsy findings was sent Friday to a spokesperson for the police department.

The update comes a day after the NAACP made a direct plea to Attorney General Merrick Garland for the U.S. Justice Department to open a federal civil rights investigation into the shooting death.

Police said Walker fled an attempted traffic stop for minor equipment violations and fired a shot from his car during the vehicle chase, but he wasn’t armed when officers shot him.

Police body camera footage shows Walker wearing a ski mask, jumping out the front passenger door of his still-moving car and then running into a parking lot, where police opened fire. That blurry footage does not clearly show what authorities say was a threatening gesture made by Walker before he was shot.

An unloaded handgun, an ammunition clip and what appeared to be a wedding band were found on the front driver’s seat of Walker’s car, authorities said.

WARNING: This video contains graphic content | Akron, Ohio police released bodycam footage of the fatal shooting of Jayland Walker, a 25-year-old unarmed black man whose body was found with some 60 wounds after police said he fled a traffic stop.

The officers involved are on paid leave while the state investigates the shooting. Seven of those officers are white, and one is Black. None of them has a record of discipline, substantiated complaints or fatal shootings, according to the police department.

The local police union has said the officers thought there was an immediate threat of serious harm and that it believes their actions and the number of shots will be found justified in line with their training and protocols.

Police in neighbouring New Franklin Township had tried to stop and then chased a car matching Walker’s for the same minor equipment violations less than 24 hours before the Akron chase. A supervisor there called off the pursuit when the car crossed the township’s border with Akron.