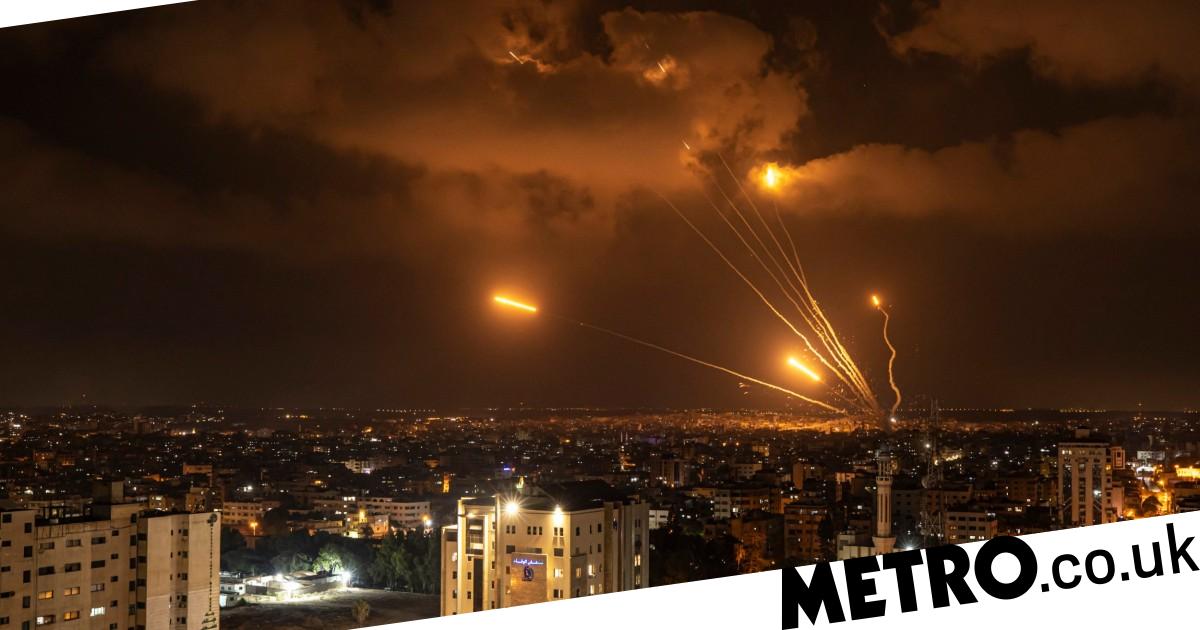 Israeli jets pounded the Gaza Strip on Saturday, hours after a wave of airstrikes killed a top Palestinian militant and at least 10 others.

A five-year-old girl also died when the two-storey home belonging to a senior commander of the Islamic Jihad group was flattened by two bombs shortly before noon on Friday.

Radicals in Gaza responded by firing at least 160 rockets towards Tel Aviv and other towns and cities.

It is the worst bout of cross-border violence since an 11-day war between Israel and Hamas last year.

But the violence remains largely contained, with any escalation largely depending on whether Hamas, the Islamic militant group which controls Gaza, opts to join the fighting.

The Palestinian Health Ministry said a five-year-old girl and a 23-year-old woman were among those killed in Gaza, without differentiating between civilian and militant casualties.

The Israeli military said early estimates were that around 15 fighters were killed. Dozens were wounded.

Islamic Jihad said Taiseer al-Jabari, its commander for northern Gaza, was among the dead. He had succeeded another militant killed in an airstrike in 2019.

That set off a heavy round of fighting between Israel and the militant group.

An Israeli military spokesman said the strikes were in response to an ‘imminent threat’ from two militant squads armed with anti-tank missiles.

The spokesman, who briefed reporters on condition of anonymity, said al-Jabari was deliberately targeted and had been responsible for ‘multiple attacks’ on Israel.

Hundreds marched in a funeral procession for him and others who were killed, with many mourners waving Palestinian and Islamic Jihad flags and calling for revenge.

Israeli media showed the skies above southern and central Israel lighting up with rockets and interceptors from Israel’s Iron Dome missile-defense system.

It wasn’t immediately clear how many rockets were launched, and there were no immediate reports of casualties on the Israeli side.

The UN special envoy to the region, Tor Wennesland, said: ‘The launching of rockets must cease immediately, and I call on all sides to avoid further escalation.’

Following the initial Israeli strikes, hundreds gathered outside the morgue at Gaza City’s main Shifa hospital. Some went in to identify loved ones and emerged later in tears.

‘May God take revenge against spies,’ one shouted, referring to Palestinian informants who cooperate with Israel.

Defense Minister Benny Gantz approved an order to call up 25,000 reserve soldiers if needed while the military announced a ‘special situation’ on the home front, with schools closed and limits placed on activities in communities within 50 miles of the border.

Israel closed roads around Gaza earlier this week and sent reinforcements to the border as it braced for a revenge attack after Monday’s arrest of Bassam al-Saadi, an Islamic Jihad leader, in a military raid in the occupied West Bank.

A teenage member of the group was killed in a gun battle between Israeli troops and Palestinian militants.

Hamas seized power in the coastal strip from rival Palestinian forces in 2007. Its most recent war with Israel was in May 2021.

Tensions soared again earlier this year following a wave of attacks inside Israel, near-daily military operations in the West Bank and tensions at a flashpoint Jerusalem holy site.

Israel withdrew troops and settlers from Gaza in 2005.