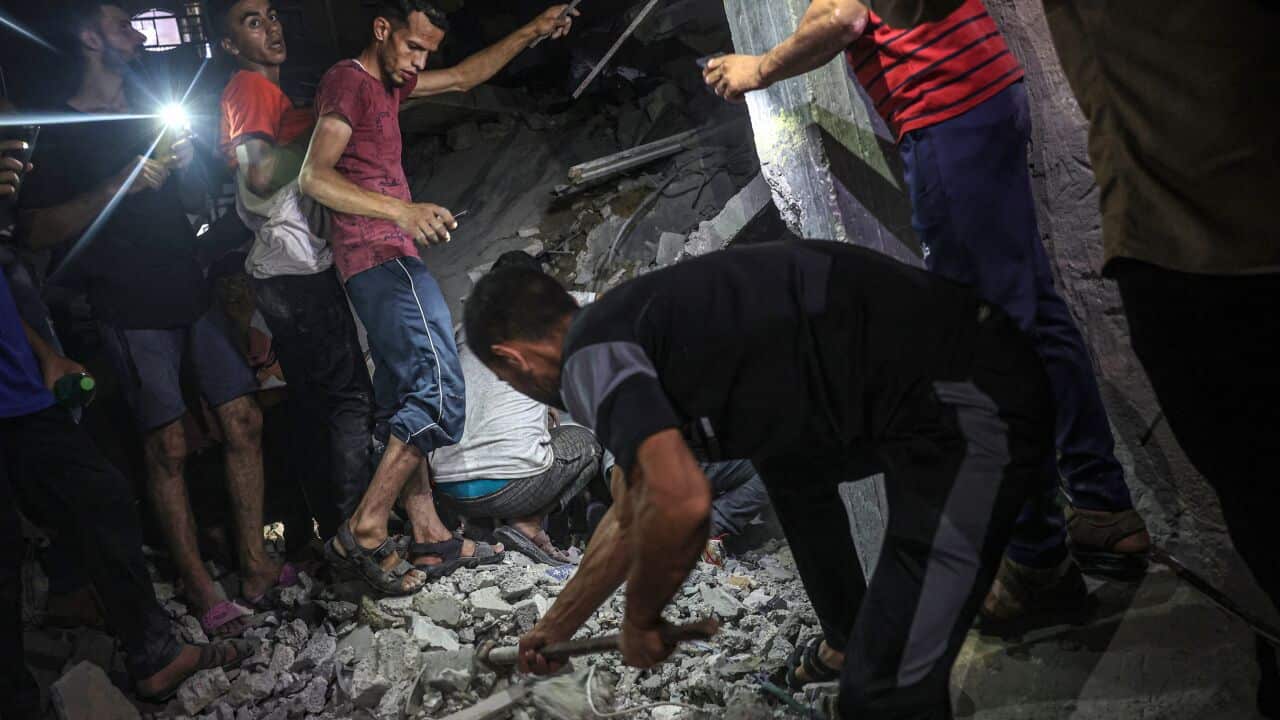 The death toll from escalating violence in Gaza had risen to 24 on Sunday, including six children, as Israel extended its bombardment of Palestinian militants who have retaliated with a barrage of rockets.
The updated count from health authorities in the Hamas Islamist-run territory said six children were among those killed since the start of the “Israeli aggression” on Friday, in addition to 204 people injured.
But Israel said it had “irrefutable” evidence that a stray rocket from Islamic Jihad militants had been responsible for the death of multiple children in Jabalia, northern Gaza, on Saturday.
It was not immediately clear how many children were killed in the incident in Jabalia. An AFP photographer saw six dead bodies at an area hospital, including three minors.

Israel’s military has warned its aerial and artillery campaign against Islamic Jihad could last a week, but Egypt’s President Abdel Fattah al-Sisi said Cairo is talking “around the clock” with both sides to ease the violence.

Israel has said it was necessary to launch a “pre-emptive” operation against Islamic Jihad, as the group was planning an imminent attack following days of tensions along the border with Gaza.
Civilians meanwhile took refuge in air raid shelters on the Israeli side, with AFP journalists hearing sirens warning of incoming fire in the Tel Aviv area on Saturday evening.
In Rafah, on Gaza’s border with Egypt, women and children were trapped under rubble following an Israeli strike, the strip’s civil defence unit said.

Rescue workers were digging through the site where a top Islamic Jihad commander, Khaled Mansour, was reportedly targeted by an Israeli strike on Saturday. The exchange of fire shattered more than a year of relative calm around Gaza. Source: AAP / Mohammed Saber

There was no specific confirmation of Mansour’s death, but the head of the Israeli army’s operations directorate, Oded Basiok, said in a statement that the entire “senior leadership of the military wing of the Islamic Jihad in Gaza has been neutralised”.

Daily life in the strip has come to a standstill, while the electricity distributor said the sole power station shut down due to a lack of fuel after Israel closed its border crossings.

Gaza’s health ministry said the next few hours will be “crucial and difficult”, warning it risked suspending vital services within 72 hours as a result of the lack of electricity.

‘We are all alone’

In Gaza City, resident Dounia Ismail said Palestinians have become accustomed to preparing a “survival bag” of items such as money and medicine.

“This latest escalation brings back images of fear, anxiety, and the feeling that we are all alone,” she told AFP. 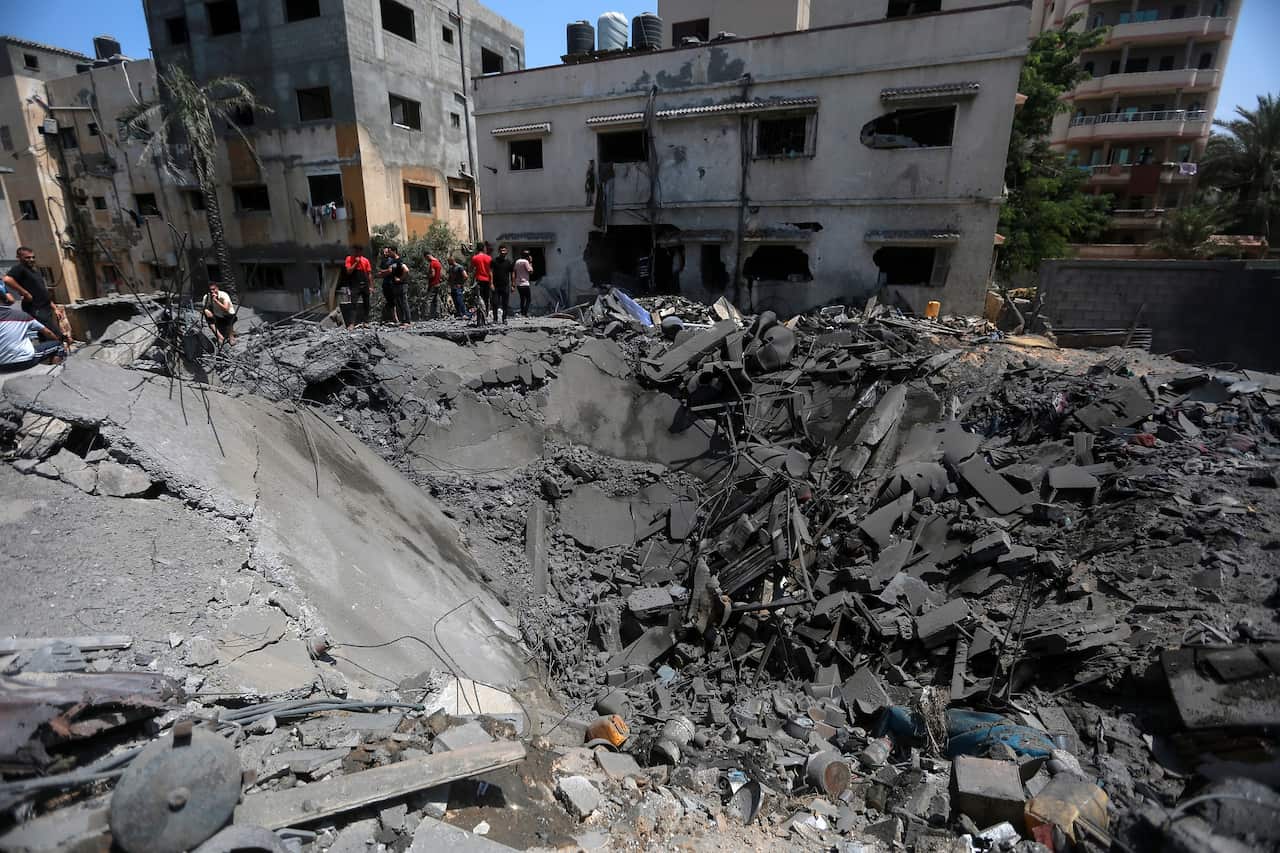 Israel says the air strikes it launched on Friday at the Gaza Strip were a response to an “immediate threat” by the Palestinian Islamic Jihad. Source: Getty / Getty Images/Getty Images

On the Israeli side of the frontier, the Magen David Adom emergency service said two people were hospitalised with shrapnel wounds and 13 others were lightly hurt while running for safety.

In Kibbutz Nahal Oz, an Israeli community beside the Gaza border, resident Nadav Peretz said he has been “in the bomb shelter or around it” since Friday.

“We recognise that on the other side too there is an uninvolved civilian population, and on both sides children deserve to enjoy their summer vacation,” the 40-year-old said.

Five-year-old girl reportedly among those killed

Islamic Jihad is aligned with Hamas, but often acts independently. Both are blacklisted as terrorist organisations by much of the West.
Hamas has fought four wars with Israel since seizing control of Gaza in 2007, including the conflict last May.
A flare-up with Islamic Jihad came in 2019, following Israel’s killing of Baha Abu al-Ata, Jabari’s predecessor. Hamas did not join the fray in that conflict.
Hamas’s moves now could prove crucial, with the group facing pressure from some to restore calm in order to improve economic conditions in Gaza.
The UN humanitarian chief for the occupied Palestinian territories, Lynn Hastings, urged the warring sides to allow “fuel, food, and medical supplies” to be delivered to Gaza amid the worsening crisis.

On Friday, the Gaza health ministry reported “a five-year-old girl” was among those killed by Israeli fire. The girl, Alaa Kaddum, had a pink bow in her hair and a wound on her forehead, as her body was carried by her father at her funeral.

The Gaza strikes follow the arrest in the occupied West Bank of two senior members of Islamic Jihad, including Bassem al-Saadi, whom Israel accuses of orchestrating recent attacks.
Israel on Saturday broadened its operation against Islamic Jihad, announcing the arrest of 19 people in the West Bank it said were members of the group.

Israel has conducted a wave of often deadly raids in the West Bank since mid-March in response to lethal attacks on Israelis.