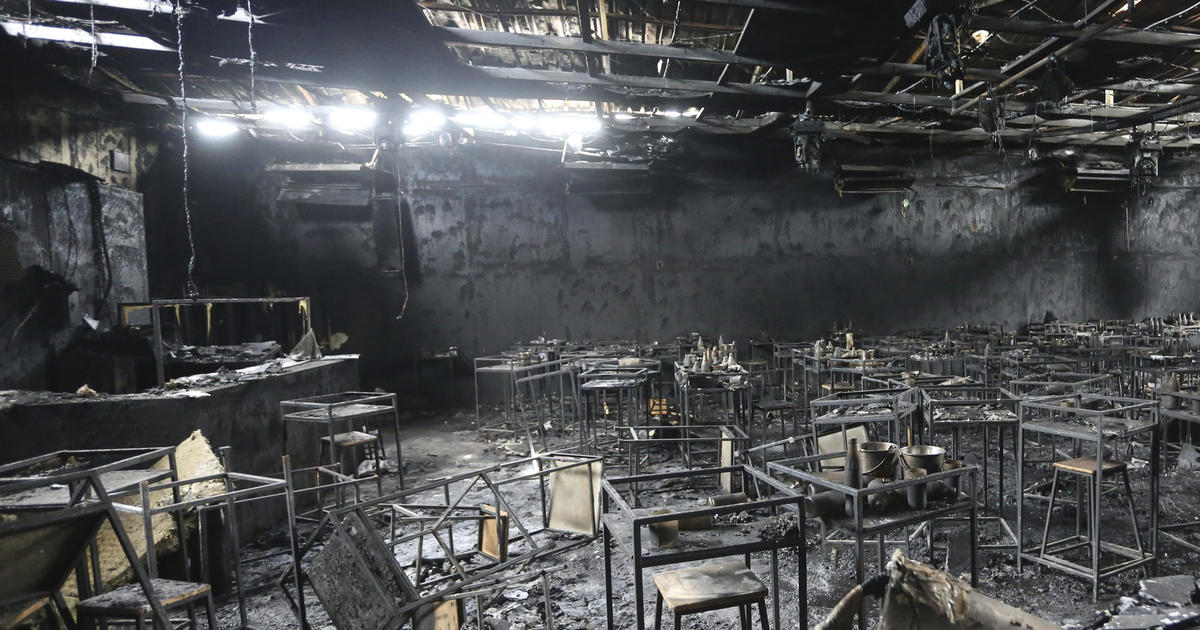 Thailand’s prime minister on Friday ordered an investigation into a massive blaze that tore through a crowded music pub, killing at least 14 people — including a singer who was performing when the fire broke out near the stage.

The fire broke out around 1 a.m. at the Mountain B nightspot in Chonburi province’s Sattahip district, about 90 miles southeast of Bangkok.

Video footage posted by a rescue service showed desperate revelers fleeing the club screaming, their clothes ablaze, as a huge fire raged in the background.

Chalit Chotisupakarn, who escaped with burns to his arms and torso, described scenes of panic and desperation as people struggled to get out of the building.

“I couldn’t see anything, everything was dark. Everybody was shouting ‘Get out! Get out!’ We all had to try to get out,” he told reporters.

“I just pushed and pushed. There were people with fire all over their bodies.”

The Sawang Rojanathammasathan Rescue Foundation said 14 people were killed and around 40 injured.

A waitress at the venue, Thanyapat Sornsuwanhiran, told Thai television reporters that she saw smoke near the stage.

“I shouted ‘fire’ to customers, and I was near the doors, so I directed them out. I kept shouting ‘fire, fire’ and the security guards were also helping lead people out,” she said.

The service said the blaze was accelerated by flammable acoustic foam on the walls of the club, and it took firefighters more than three hours to bring it under control.

Prime Minister Prayut Chan-O-Cha offered condolences to the victims’ families and said he had ordered a probe into the fire.

The dead — four women and 10 men — were found mostly crowded by the entrance and in the bathroom, their bodies severely burned, the service said.

They were aged between 17 and 49 and all are believed to have been Thai.

“There is not death related to foreigners,” police lieutenant colonel Boonsong Yingyong of the Phlu Ta Luang police station, which oversees the area where the blaze occurred, told AFP by phone.

One of the victims was the singer of the band playing at the club, his mother told local media.

“I don’t know what to say. The death came all of a sudden,” Premjai Sae-Oung told reporters.

She said a musician friend who managed to escape had told her the fire broke out in front of the band and spread rapidly.

“The fire started at the top right corner of the stage,” a witness identified only as Nana told PPTV. “The singer must have seen it too, so he shouted ‘fire’ and threw away the microphone.”

Images of the aftermath showed how the fire had turned the inside of the club into a blackened wreck, with the charred metal frames of furniture scattered among ashes.

Police are investigating if fire escapes were present in the one-story building and engineers are inspecting the structure amid fears it could collapse.

Interior minister Anupong Paochinda told reporters it appeared the Mountain B was operating “without permission” to run as an entertainment venue.

Sompong Chingduang, assistant commissioner of the Royal Thai Police, said the owner was under investigation for apparently changing the venue from a restaurant to a nightclub without permission.

Concerns have long been raised about Thailand’s lax approach to health and safety regulations, particularly in its countless bars and nightclubs.

A massive inferno erupted at a New Year’s Eve party at Bangkok’s swanky Santika club in 2009, killing 67 people and injuring more than 200.

The owner of Santika was jailed for three years over the blaze, which began when fireworks were set off as a rock band called Burn played on stage.

In 2016, a nighttime fire at a dormitory of a Christian elementary school in northern Thailand killed at least 17 girls.

More recently, four people were killed in a fire caused by an electrical fault at a club on the holiday island of Phuket, a magnet for foreign tourists, in 2012.

The Associated Press contributed to this report.