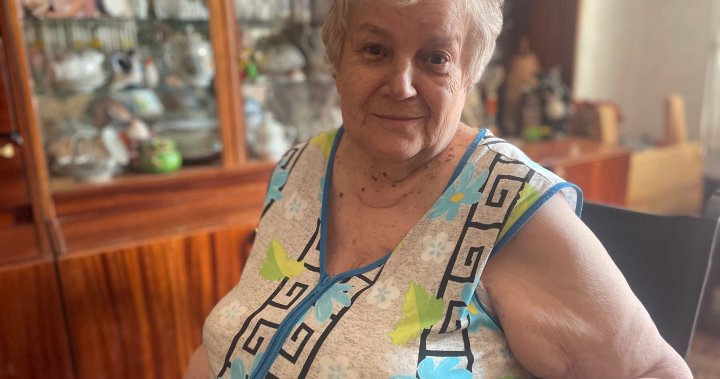 Svitlana Savchenko uses a side table as a walking aid. She hunches impossibly low over the small piece of furniture, holding it with both hands to lift it up and place it back down in front of her, shuffling along awkwardly behind it.

The 81-year-old Kharkiv resident is largely wheelchair-bound and is rarely able to go outside without help. She has no remaining family nearby; her husband, whom she said had no legs and was also in a wheelchair, died five years ago and her son died a year after that.

For Savchenko, there is no shelter from the constant shelling that Russia inflicts on Ukraine’s second-largest city. As air raid sirens sound, she lives in the knowledge that she can’t flee to safety even if she wanted to.

“This is my homeland and I don’t have anywhere else,” Savchenko says. “I have no relatives. I can’t walk. What can I do?”

Savchenko is one of thousands of elderly and vulnerable locals who have been left to fend for themselves in Kharkiv, the site of intense fighting early in the war and an ongoing target of Russian bombardment due to the proximity of the eastern front lines.

Though their disabilities and age-related frailties pre-date the invasion, an exodus of friends, relatives and other community support have left them more vulnerable and reliant on local volunteers.

One of the organizations that has stepped in is Rescue Now, founded at the onset of the war by well-known Kharkiv actor Igor Klyuchnik and run by a local team of entrepreneurs, restaurateurs, IT professionals and investors.

As well as organizing evacuations from the Luhansk, Donetsk and Kharkiv regions, Rescue Now has created an online database of elderly and vulnerable locals that features a brief bio, photo and fundraising goals for each of them for each month, depending on their needs. It’s almost like hundreds of GoFundMe pages accumulated in one place.

The program is referred to as the “adopt a grandparent” campaign and allows people from anywhere in the world to donate money towards food and medicine packages for a specific person.

People can donate as much or as little as they want, like a GoFundMe, or they can take full responsibility for their monthly costs, thus becoming an “adoptive grandchild.”

“We want to show people who they can help and who the faces are. We’re trying to make it tangible,” Kharkiv hub co-ordinator Vlad Glavachek says.

Before the war, he was a business development manager and, like many of his team, he led a much different life.

They didn’t necessarily all know each other before the war, Glavachek says, but “someone knew someone who knew someone,” and the organization grew from there.

The hope is that as interest in the war wanes and donations dwindle, an accessible online portal will continue to facilitate donations to the war effort.

Which means ongoing support for people like Savchenko. She breaks down in tears as she considers what her life has become, pointing to her cat Busia as her saving grace.

“It’s very difficult when you’re alone. My cat is the only thing that saves me,” she says.

How to ‘adopt’ a Ukrainian in need

Rescue Now operates out of an empty warehouse in central Kharkiv. When we visit, there’s an acrid stench in the air from a nearby rocket attack that took place the previous night. Hours later,  the building is still burning, sending plumes of smoke over the city.

Inside the warehouse, volunteers are stacking bags of food against one wall before loading them into the trunks of waiting cars.

Evgeny, a taxi driver, drives into the warehouse in an old car perforated with shrapnel holes. He was driving the vehicle when a rocket exploded nearby, he explains, and the back seats and doors had to be replaced due to the damage. It hasn’t put him off driving around the city though; he delivers for Rescue Now every day.

Stories vary in degree of need. There’s an elderly woman who has accumulated dozens of hungry animals to feed after their owners fled town. Another woman poured peroxide on her legs for her burnt veins when pharmacies were closed. Others have lost spouses during the war or have debilitating injuries.

“One man we helped, I remember, he was old and when we evacuated him he was so happy because he couldn’t get out of bed for three years,” Glavachek says.

It is these stories that propel him, and his fellow volunteers, he says.

In the hallway of a Soviet-style residential building in eastern Kharkiv, a young Rescue Now volunteer approaches a second-floor apartment, knocking on the door and calling out, “Hello grandmother!”

A voice from inside tells the young man to enter. Svitlana Savchenko greets us from the hallway, hunched over her trusted side table.

Back in her lounge and settled in her wheelchair, Savchenko, who also suffers from a heart condition, says she is recovering after a sleepless night.

“I didn’t sleep last night because of the four rockets landing. No sleep, just sitting,” she says.

She is clearly happy to have visitors. Just weeks shy of her 82nd birthday, Savchenko is spirited as she speaks. Her apartment is tidy, but small, with tight corners difficult for her wheelchair to maneuver around — thus, the dual use of the side table.

Other than volunteers, visitors to her home are few and far between, Savchenko says.

Of her remaining family, she has a grandson who lives two hours away in Poltava and is only able to visit once a month. Her daughter-in-law and another grandson fled to Poland on February 25, a day after the Russian invasion.

Savchenko refuses to leave. She has lived in Kharkiv for more than 70 years, she explains, and it is her home.

After five months of war, she says she is getting used to the constant shelling, but still relies on valerian drinks to calm her nerves.

She cannot leave the house to buy supplies but tries to stay as self-sufficient as she can.

“Thanks to [volunteers], I don’t go hungry. I’m slowly cooking by myself. I vacuum and wash myself.”

The only time Savchenko gets emotional during our visit is as we prepare to leave. Through tears, she spoke of her reliance on her cat for company and then told us to “always take care of your mothers.”

Many elderly in Kharkiv haven’t left their homes in months. While many struggled to do so before the war, the threat of shelling makes outdoor excursions even more daunting now.

The last time Liubov, who asked for her last name not to be used, went outside was in autumn.

Liubov lost the use of her legs one and a half years ago due to a succession of three strokes and is now confined to a small, one-bedroom studio on the fifth floor of a suburban apartment block, which doesn’t have a lift.

Her husband is now her full-time carer.

Liubov cries non-stop as she speaks of her plight, stuck in an apartment barely the size of a medium-sized bedroom — a bed squeezed into an alcove, a couple of tables, a kitchenette and nothing much else — and constantly terrorized by explosions outside. Her husband does not speak.

“It’s terrible,” she says of the nightly air raid sirens and shelling.

The food parcels she receives are not enough, she says, and she relies on potatoes she stocked up on months ago to supplement her diet.

When asked if there was anything she wanted people in the West to know, she issued a desperate plea through tears: “Please help us.”

It’s not clear what social supports are currently on offer for vulnerable residents through the Kharkiv City Council or how many elderly and disabled remain in the city. Global News tried to contact the council through several channels but our questions were not answered.

What is clear is that volunteers are filling a void in a time of desperate need.

In a damp and crowded apartment in suburban Kharkiv, a disabled mother and son say they’re not receiving enough support to survive.

Liudmyla Kholina, 72, who has severe mobility issues, cares for her 49-year-old son Hennadii Kholin with cerebral palsy with the money they scrape together on disability benefits and whatever they get from volunteers.

Kholina speaks loudly and emotionally from one of two small cots crammed into her lounge, most of the room’s surfaces covered in food wrappers and medication boxes.

Canadian embassy in Kyiv still shuttered despite ‘reopening’ in May

She says her son, who is recovering from an operation, receives 2300 hryvnia ($80 CAD) per month in social support and she receives $2890 hryvnia ($101 CAD). For extra aid, she relies on the help of neighbours or volunteers such as Rescue Now.

“There is practically no way out,” she says of her predicament.

“I can’t go to the toilet at all. I can’t even go to the kitchen to cook.”

Rescue Now costs 4.5 million hryvnia per month to operate — they collected about 70 per cent of that amount last month, Glavachek says.

That number, however, is declining as war fatigue sets in.

“It’s getting harder and harder to fundraise now because people are tired of the war,” Glavachek says.

“Volunteer hubs in Kharkiv are disappearing because they can’t get donations.”

That is why moving things online has become so important. Glavachek and his co-founders hope that the international community might continue to give that way.

On average, it costs about 1000 UAH ($35 CAD) for a package for one “adopted grandparent,” he says. They deliver these to their patrons about once every ten days, more if they can.

The more he speaks about his work, the more the toll of the past five months becomes clear on Glavachek’s face.

Propaganda or providence: one Ukrainian’s wild story of survival

He gets visibly emotional and struggles to speak while considering his own feelings about his newfound work, considering it is also his city under attack.

“I put myself on pause. I don’t even realize what’s happening with me,” he says.

“It’s hard to handle thinking (about this). I can’t think about it. We focus on the people.”