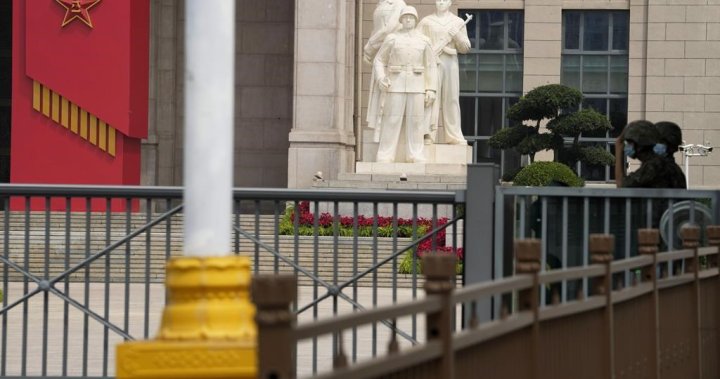 China announced suspension of dialogue with the United States in a number of areas on Friday, countering the recent visit to Taiwan by U.S. House Speaker Nancy Pelosi.

Not only has dialogue been cut on climate change and between theatre-level military commanders, cross-border crime and drug trafficking exchanges have also been ceased.

With such an “un-transparent” regime, it could be hard to predict what lies ahead for Canada’s diplomatic relations with China, says Josephine Chiu-Duke, professor at the University of British Columbia’s (UBC) Asian Studies Department.

“I did not expect the Chinese regime would act in such a fierce, violent way,” she told Global News.

For Canada, “we can’t really predict China’s actions because their system is simply so un-transparent,” she said. “In the long run, we just don’t know what other actions China will take.”

However, at least for now, Chiu-Duke doesn’t seek any shift in relations coming between Canada’s relations with the People’s Republic of China.

“At the moment, I don’t see any particular change of course in terms of the relationship between Canada and the People’s Republic of China,” she said.

In response to what China described as Pelosi’s “vicious” and “provocative” actions from her visit to Taiwan earlier in the week, the Communist government of the country also announced sanctions on her and her immediate family.

“I think it’s important for China to understand that its behaviour is irresponsible,” André Laliberté, professor at the University of Ottawa’s School of Political Studies, told Global News.

“And, I think Canada has to stand firm and say that it’s not acceptable. I think it’s in the rights of the Canadian government to just speak frankly to China and say that its behaviour is irresponsible,” he said, also noting the importance of Canada maintaining close coordination with allies.

Ties between the U.S. and China have always been closely watched by Canada, Margaret McCuaig-Johnston, senior fellow at the University of Ottawa’s Graduate School of Public and International Affairs, told Global News. She called the halting of dialogue a “gross overreaction.”

Going forward, Canada must put a comprehensive plan in place in order to regulate relations with both China and Taiwan, said McCuaig-Johnston.

“We need to describe the new, more aggressive China that we’re seeing and identify ways in which our government plans to manage that relationship and also describe how we’re going to work with and support Taiwan. This Indo-Pacific strategy is going to shape how we relate to China and Taiwan and other countries in the region.”

Charles Burton, senior fellow at the Macdonald-Laurier Institute and former counsellor at the Canadian Embassy to China, would like to see an Indo-Pacific policy consistent with European allies, along with Australia and the U.S.

“We really need to put this matter on the government’s agenda, make some decisions and state exactly where Canada stands with regard to the defense of Taiwan and with regard to China’s activities,” he told Global News.

With no Canadian ambassador in Beijing since Dominic Barton left in December of last year, Canada’s voice in China is currently “muted,” according to Burton.

“In terms of getting access to the Chinese regime and be taken seriously, you really need someone at the ambassadorial level,” he said.

On Friday, China’s foreign ministry said it had summoned Beijing-based Canadian diplomat Jim Nickel over Canada’s participation in reaffirming the country’s commitment to preserving peace and stability across the Taiwan Strait and beyond.

A statement on behalf of the foreign ministers from G7 nations was issued on Wednesday to outline their concerns over the recent “threatening actions by the People’s Republic of China, particularly live-fire exercises and economic coercion, which risk unnecessary escalation.”

“There is no justification to use a visit as pretext for aggressive military activity in the Taiwan Strait,” the statement had said.

Right after, Nickel was summoned Thursday by Chinese vice foreign minister Xie Feng and urged that Canada “immediately corrects its mistakes” on the issue of Taiwan or “bear all consequences,” according to a statement from the Chinese foreign ministry published Friday.

“Any conspiracy to condone and support the separatist forces for ‘Taiwan independence’ is doomed to failure,” the statement said.

“Any consequences derived from this G7 statement will not just harm the relationship between China and the G7 countries, but it will also harm China itself,” said UBC’s Chiu-Duke, noting the country accesses products and food from Canada, including wheat.

“Canada has always been asserting that we support liberal democracy and human rights, so the fact that the foreign minister joined the other G7 countries to issue that statement already demonstrates our firm commitment to this kind of a principle. The country should not kowtow to a bully,” she said.

Canada’s relations with China have had a murky past. In Dec. 2018, at the request of the U.S., Canada arrested Meng Wanzhou, a senior executive of Chinese firm Huawei Technologies. Wanzhou faced charges related to American sanctions against Iran.

Following her arrest in late 2018, two Canadians working in China, Michael Kovrig and Michael Spavor were detained. In 2021, in closed Chinese courts, they were both convicted of spying. The two Michaels, as they came to be known, were permitted by Beijing to fly home on Sept. 25 after a deferred prosecution agreement was worked out by the U.S. in Meng’s case, allowing for her release.

“The kidnapping of the two Michaels is still, for many people, a very, very bitter memory,” said Laliberté.

China lashing out over Pelosi visit, but experts say Taiwanese are ‘thrilled’

In the beginning of this year, Canada’s minister of international trade, Mary Ng, spoke with Taiwan Minister John Deng.

The two agreed to begin talks on a possible foreign investment promotion and protection arrangement between Canada and Taiwan — Canada’s sixth-largest trading partner in Asia — during the meeting.

“That’s very high level. I think that indicates Canada’s support for democracy,” said McCuaig-Johnston, noting Canada’s ships have been sent through the Taiwan Strait and the country’s strong diplomatic team in Taipei.

“I think it must be clear to Canadians that we have to stand with our allies. Canada has to stay strong. We have to stand up to this kind of rhetoric and bullying,” she said.