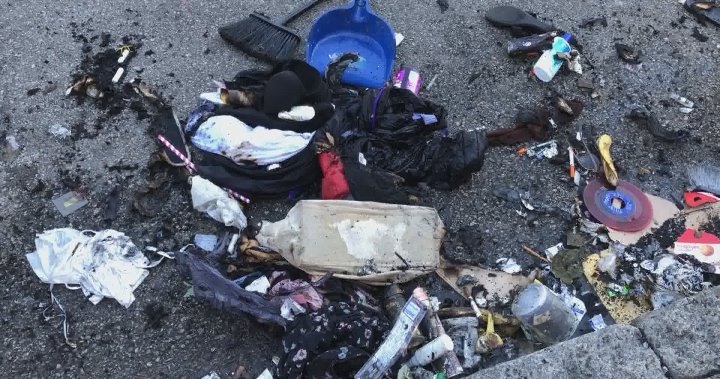 It was the Vancouver fire chief’s worst fear when she ordered the immediate removal of structures from a growing sidewalk tent city in the Downtown Eastside last month. Early Saturday, it was realized.

A tent caught fire along the 100-block of East Hastings Street around 6:00 a.m., in front of the Brandiz Hotel SRO.

“This houses roughly 180 to 200 people, it’s much too close,” said resident Kevin Purdy. “This is what the fire department chief was saying.”

On Saturday morning, Purdy, who’s done garbage duty for the Brandiz Hotel for the last eight years, was cleaning up the remnants of someone’s burnt possessions.

“It was just a loud explosion and then a bunch of smoke and fire crews,” said Justin Chipman, who heard the fire from his room. “It could have blown buddy to kingdom come.”

Chipman believes a propane tank in the tent may have fuelled the blast he heard.

No one was hurt according to Vancouver Fire and Rescue Services, which said the cause is under investigation and it’s unclear if propane, butane or any other flammable materials were involved.

Purdy has lived in the DTES for 20 years, and with low-income tenants already displaced by three major building fires in as many months, he and other residents want action to make the area safe for everyone.

When Vancouver Fire Chief Karen Fry issued a July 25 order to immediately remove tents and structures from the stretch of East Hastings near Main Streets, she warned a potential fire “would be catastrophic, putting lives at risk and jeopardizing hundreds of units of much-needed housing.”

Two people died when a huge fire engulfed the Winters Hotel in Gastown on April 11, and displaced dozens of SRO residents.

Two months later, a man died after a battery overload caused an explosion at the Empress Hotel SRO in the 200-block of East Hastings.

On July 6, the Street Church and an adjacent two-storey building were destroyed in a fire in the 100-block of East Hastings.

“It has the potential to really get out of hand if it keeps persisting,” said Purdy.

Purdy said safety concerns, including fires and violence, have escalated with the recent growth of the sidewalk tent city.

“An elderly friend of mine got kicked because there’s no room to run his wheelchair,” he told Global News. “A 70 year old man in a wheelchair does not need to be assaulted when he’s got nowhere to go and he’s just trying to get by.”

While Purdy and other DTES residents do their best to remove debris and keep the sidewalk clear, he said the ongoing problem needs to be resolved.

“I feel sorry for the campers but they have to have a better place organized than the sidewalk,” said Purdy.