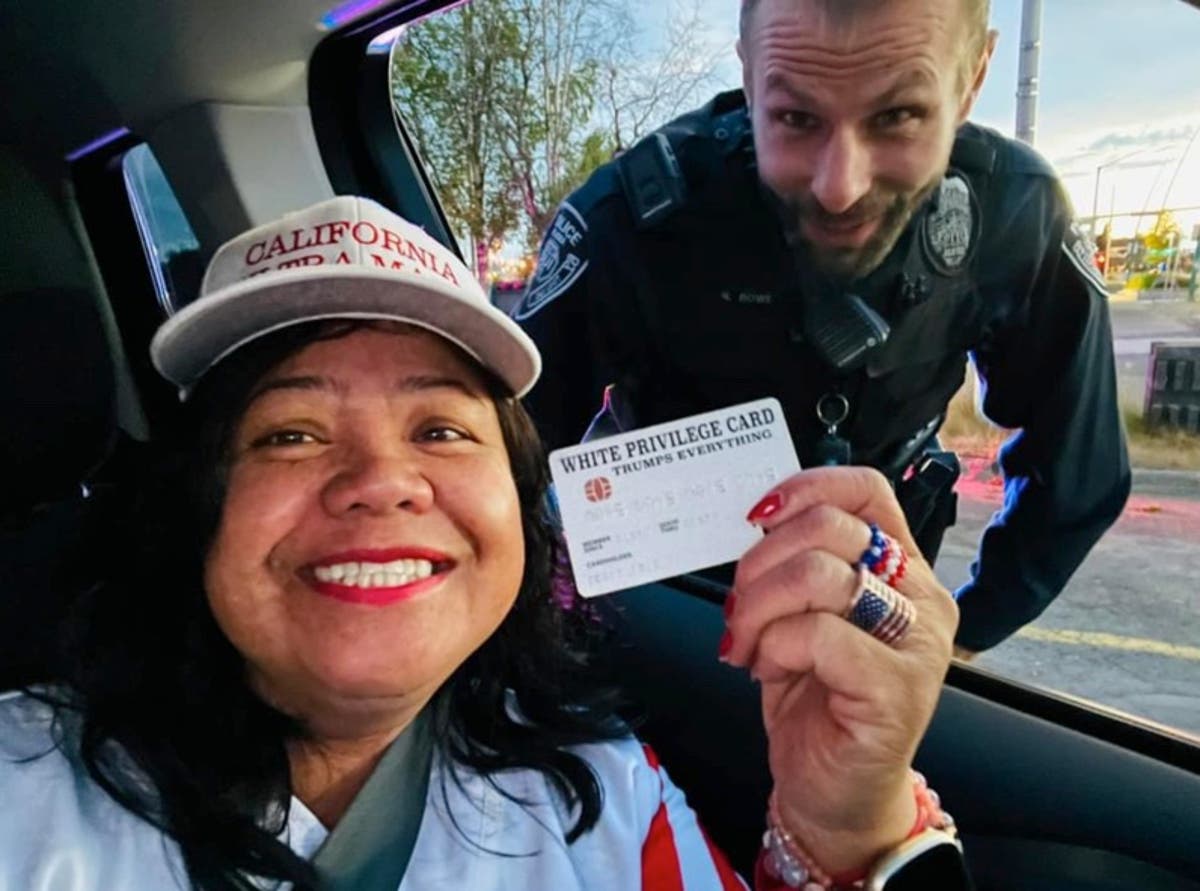 An investigation has been launched after a woman flashed her “white privilege card” and took a selfie with a police officer during a traffic stop in Alaska.

Mimi Israelah claimed in a Facebook post that she was heading to former president Donald Trump’s rally in Anchorage last Saturday when she was pulled over.

She wrote that she had just flown in from California and was “starving and sleepy” at the wheel, admitting that her vehicle was “waving on the road”.

“When I saw my White Privilege card, I gave to him if it’s ok,” she wrote. “He laughed and called his partner. It’s their first time to see a White Privileged (sic) card.”

Ms Israelah, whose social media profile says that she is Filipino, shared a photo of herself and the officer smiling together as she flashed the card to the camera.

“White Privilege Card works as a Driver’s License! Always keep one in your wallet,” she captioned the post.

The post was deleted after it sparked uproar about issues of racial inequality.

However the post had already been screenshotted and shared online. Footage of the incident, which appears to have been filmed by Ms Israeleh, was also reposted.

In it, two officers are seen standing outside her car as they laugh and joke about the card.

One of the officers responds “that’s hilarious”, and they both laugh.

It is not clear if the woman received a ticket or if she was made to produce her driver’s license. In comments on Ms Israeleh’s original post, she claimed that she was not given a ticket.

The Independent has reached out to Anchorage Police for comment and further information.

The department confirmed to the Associated Press that the incident was “under investigation” but provided no further details.

Anchorage Police Chief Michael Kerle appeared to address the incident in a cryptic statement on the department’s website on Tuesday.

“I want to personally address the community to provide some clarity regarding our internal standards of conduct and ensure that it is clear to Anchorage citizens what the expectation of APD employees are and how we interact with our community,” he said.

“As law enforcement professionals, we are held accountable for our actions, and I am aware that the action of one officer can impact the trust between the police force and our community.

“I know we are all human. But we belong to a profession that does not tolerate, practice, condone, facilitate, or collaborate with any form of discrimination. This profession requires our employees to treat everyone with respect and be culturally aware and competent.”