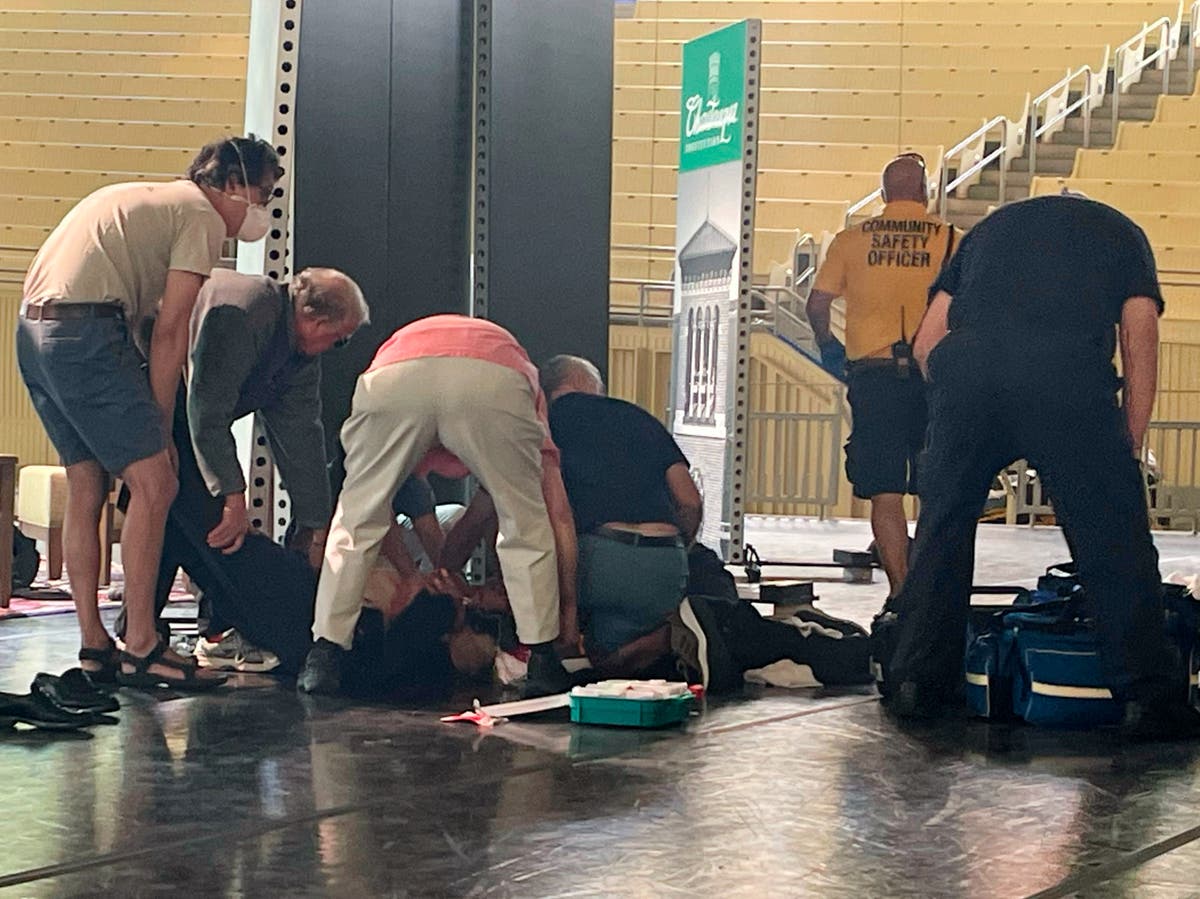 The moderator who was on stage with Salman Rushdie when the author of The Satanic Verses was stabbed, has said that he himself is doing “quite well” and expressed concern for the writer who is “important to the world.”

In an interview with the BBC, Henry Reese said that he hoped to go back to the Chautauqua Institution and continue the conversation he was going to have with Mr Rushdie. He said: “That would be my ideal to do that and to see that happen and to not be in any way impeded from doing what we set out to do.”

Earlier, Mr Reese — the co-founder of City of Asylum in Pittsburgh, which offers safety, shelter, and support to persecuted writers and artists from Ethiopia, Syria, Venezuela, Vietnam, El Salvador, Cuba, and Algeria — and who was moderating the lecture in Chautauqua Institution in New York said that the organisation had received a “great outpouring of support” and that they “will not be intimidated” by the incident.

“Our mission is to protect writers over in sanctuary. And to see Salman Rushdie assaulted for his life is unimaginably… it is hard to describe what it is to see that happen in front of you,” he told Pittsburgh Post-Gazette

He added that the focus is on Mr Rushdie and confessed that the attack has reminded them of “how important it is that we do what we do.”

On Friday last week, Mr Rushdie, 75, was stabbed on stage which resulted in damage to his liver and severed nerves in an arm and an eye, his agent Andrew Wylie had said. On Sunday, he said that the author was “on the road to recovery.”

Mr Reese was also injured during the attack and received severe bruising on the right side of his face. He was discharged from the hospital on Sunday. “I am doing well. Everything is proceeding. I am doing quite well. And I think our concern is for Salman. And I mean that both certainly for himself but also for what he means in the world. And he is important to the world,” he told BBC.

In an emailed statement to the New York Times, he called Mr Rushdie “one of the great defenders of freedom of speech and freedom of creative expression” and added that “the fact that this attack could occur in the United States is indicative of the threats to writers from many governments and from many individuals and organisations”.

“This is a very bold attack against the core values of freedom and ways of resolving differences short of violence, with art, literature, journalism,” Mr Reese told The Atlantic.

Mr Rushdie was forced into hiding in 1989 after Iran’s supreme leader Ayatollah Ruhollah Khomeini issued a fatwa [death sentence] against him. Mr Khomeini called on Muslims around the world to kill the Indian-born author after his book was condemned as blasphemous.

Iran, meanwhile, denied any involvement in the attack but a spokesperson for Iran’s foreign ministry Nasser Kanaani said: “Regarding the attack against Salman Rushdie in America, we don’t consider anyone deserving reproach, blame or even condemnation, except for (Rushdie) himself and his supporters.”

Mr Kanaani added: “In this regard, no one can blame the Islamic Republic of Iran. We believe that the insults made and the support he received was an insult against followers of all religions.”

Several newspapers in Iran heaped praise on Mr Matar for the attack and some also feared repercussions.

One hardline Kayhan newspaper, whose editor-in-chief is appointed by Mr Khomeini himself, wrote: “A thousand bravos… to the brave and dutiful person who attacked the apostate and evil Salman Rushdie in New York. The hand of the man who tore the neck of God’s enemy must be kissed.”

BBC Monitoring did an analysis of reports and editorials from several sources in Iran — including hardline and reformist outlets — and found that some claimed the attack on Mr Rushdie was justified as a “religious execution” while others alleged it was a conspiracy to isolate Iran.

Meanwhile, Michael Hill, the head of the Chautauqua Institution, where Mr Rushdie was stabbed said that they have to take on “hate” now but says they will continue the organisation’s mission.

Mr Reese said in the aftermath of the attack: “The only defence we have as an organisation and as a society is to continue. We will not be intimidated … if anything we’re inspired to do more.”