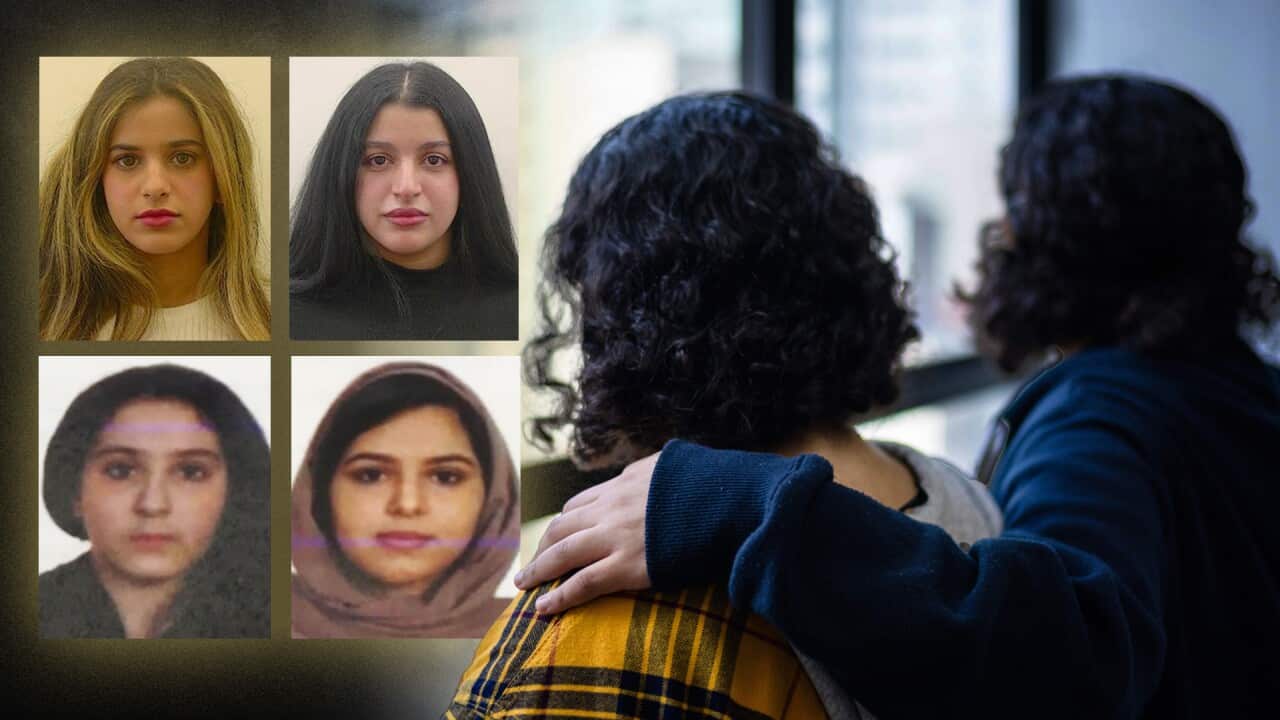 The mysterious deaths of two Saudi Arabian women in Sydney are not the first time two sisters from the kingdom have pleaded for international help, or the first time their stories have ended in tragedy.
NSW Police has appealed for the public’s help in understanding the Asra Abdullah Alsehli, 24, and Amaal Abdullah Alsehli, 23. The women’s bodies were found in their beds in the southwest Sydney suburb of Canterbury on 7 June with police confirming their identities on 27 July.
, and another two sisters found dead in New York the year before, also drew international attention.

Reem and Rawan tried to flee to Australia Two Saudi sisters aged 18 and 20 – who used the aliases Reem and Rawan – fled from their family while on holiday in Sri Lanka in 2018. They hoped to get to Australia to seek asylum but became stranded in Hong Kong where they say Saudi consular officials intercepted them in an attempt to get them to fly back to their homeland against their will.

The sisters made a public appeal for their safety and were eventually .
Lawyer Michael Vidler represented them at the time and is now based in the UK. He told SBS News his clients had felt “immense fear” at the possibility of being sent back to Saudi Arabia.
“They were very clear in their minds, what would happen to them. They would, at the very least, disappear and be imprisoned,” he said.

The two women said chronic physical abuse by male family members prompted them to flee and they had also renounced Islam. 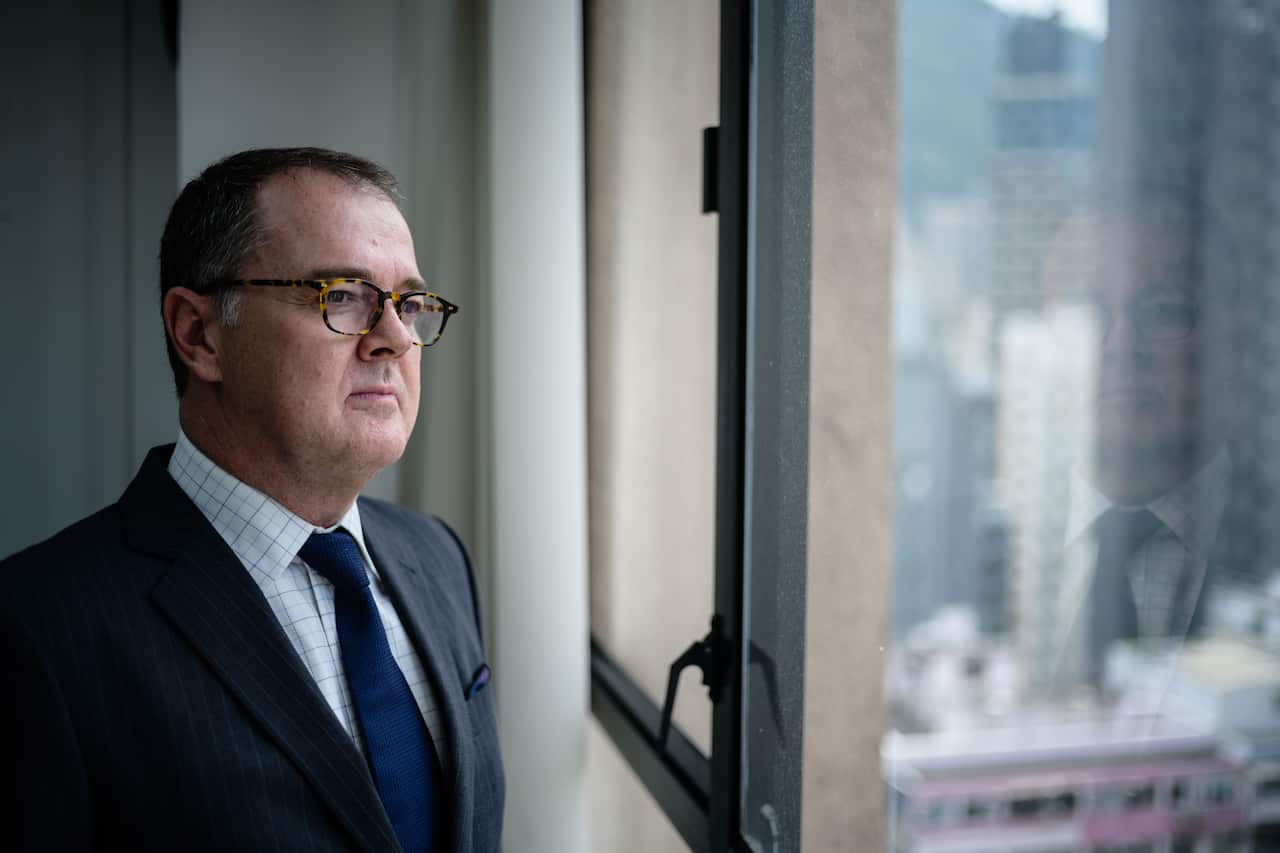 Responding to the Sydney case of sisters Asra and Amaal, Mr Vidler said he could imagine the fear they would have felt if their application for asylum had been rejected. He said his own clients Reem and Rawan were so scared that he feared they would take “extreme” action if their relocation to a third country place of safety had been refused.

“I can well imagine the desperation of Asra and Amaal. It’s just extremely tragic,” he said.

“All we want is to go to a third country place of safety without being ever fearful that the Saudi authorities and our family will find us and abduct us,” Reem and Rawan said in a statement at the time.

Rotana and Tala were found dead in New York

The deaths of Asra and Amaal in Sydney bear similarities to those of Rotana Farea, 23, and Tala Farea, 16, in New York in 2018. The sisters’ bodies were found in the Hudson River, bound together at the waist with duct tape. Their deaths were ruled to be suicide.

New York Police Department Chief of Detectives Dermot Shea said at the time authorities were told the sisters had made statements that “they would rather inflict harm on themselves, … suicide, than return to Saudi Arabia”.

Reports that Rotana and Tala applied for asylum in the US could not be confirmed. SBS News received no response to inquiries sent to the US Department of Homeland Security.

In Australia, a lawyer who has worked with Saudi clients and did not want to be named due to concerns over client safety, said there was “enormous fear” within the community of Saudi citizens not being recognised as refugees and being forced to return to the conservative kingdom.
The lawyer said regardless of how they died, Asra and Amaal were “fleeing a regime in which women are treated like children”.

“Whatever happened to these women was incredibly tragic, but the ultimate cause is the guardianship system in Saudi Arabia,” they said, adding if one of the sisters was gay “they were in extreme danger in Saudi Arabia”.

SBS News has confirmed Asra and Amaal were seeking asylum in Australia but the reasons for their asylum claim remain unknown. Last week an claimed Amaal had applied for a protection visa in Australia “on the basis she was a lesbian but was denied it because she could not describe the gay events she went to in Sydney in sufficient detail”.

Mr Vidler said it would be “really troubling” if that report was true and would require an urgent review to see whether the sisters had been failed by authorities.

Whatever happened to these women was incredibly tragic, but the ultimate cause is the guardianship system in Saudi Arabia.

The Department of Home Affairs previously told SBS News it does not comment on individual cases.
Asked about the human rights issues Australia recognises when it comes to the processing of protection visas for Saudi citizens, a spokesperson for the department said: “All protection visa applications are assessed on an individual basis, with regard to contemporary country of origin information”.
Of the 190 people from Saudi Arabia who applied for protection visas in Australia in the five years between 2017/18 and 2021/22, more than 130 visas were granted.

SBS News has contacted the Saudi consulate-general in Australia for comment.

Why do women want to leave Saudi Arabia?

Rasha Younes, Human Rights Watch researcher for LGBTIQ+ rights in the Middle East and North Africa, said even without taking sexuality into account, women in Saudi Arabia generally have reasonable grounds to seek asylum simply based on their daily lives.
“The rights of women and LGBT people in Saudi Arabia are repressed … A woman’s life is controlled by a man from birth until death,” she said.

Under “guardianship” rules, women in Saudi Arabia must get a male guardian’s approval to get married, leave prison, or access certain healthcare. 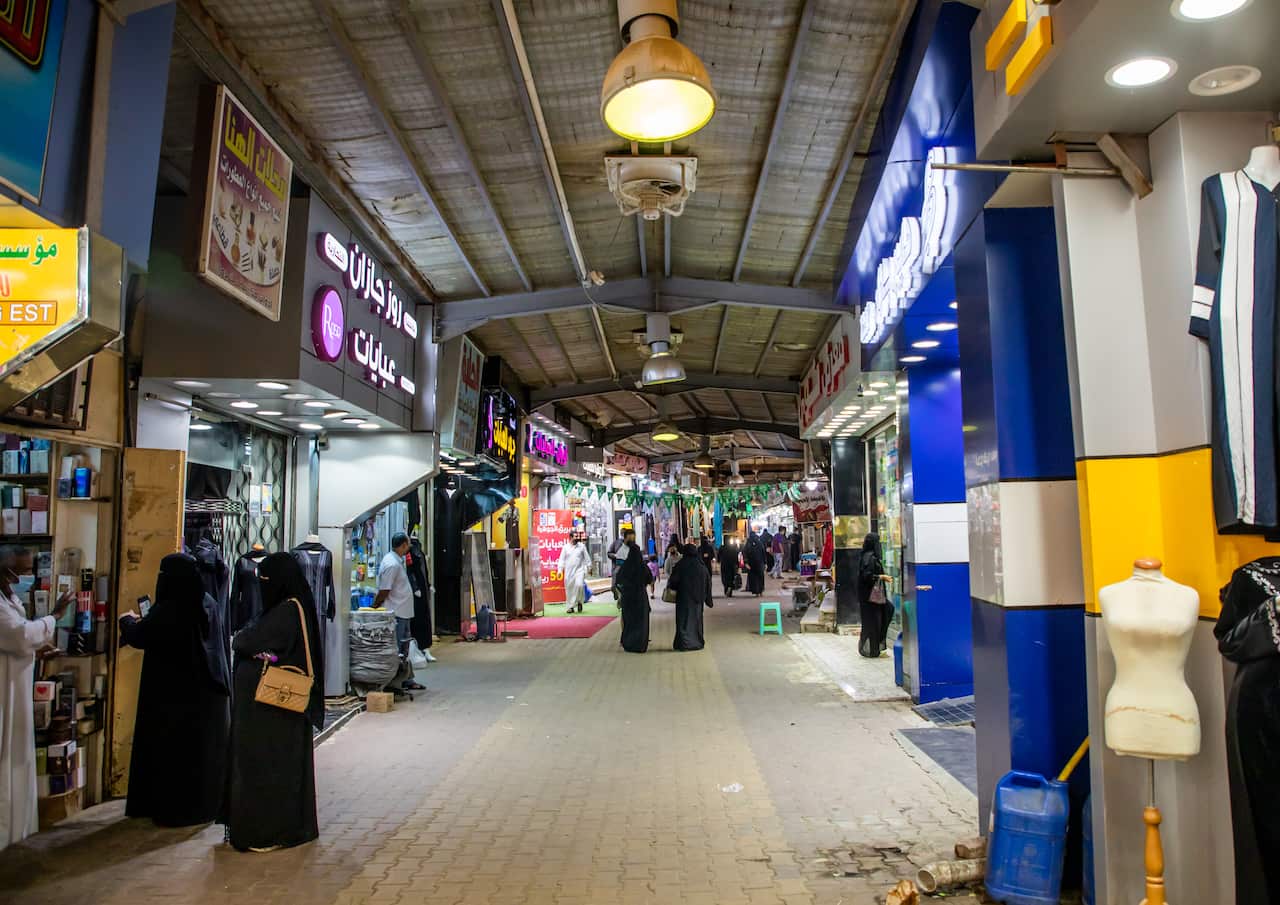 Every woman in Saudi Arabia must have a male guardian. Source: Getty / Eric Lafforgue/Art in All of Us/Corbis via Getty Images

Ms Younes said every Saudi woman must have a male guardian, normally a father or a husband, but in some cases, a brother or even a son, who has the power to make a range of critical decisions on her behalf. She said the system essentially makes adult women “legal minors who cannot make decisions for themselves”.

“They regularly face difficulty conducting a range of transactions without a male relative, from renting an apartment to fighting legal claims,” she said.
“The impacts of these restrictive policies on a woman’s ability to pursue a career or make life decisions varies, but it’s largely dependent on the goodwill of a male guardian.”

Human Rights Watch’s 2021 World Report noted women continued to face discrimination in relation to marriage, family, divorce, and decisions relating to children, including child custody. Men can also file cases against their daughters, wives, or female relatives under their guardianship for “disobedience”. This can see the women forcibly returned to their guardian’s homes or imprisoned.

Ms Younes said women who do not get their guardian’s consent for things like travel, study or moving out of home, may live in fear of their lives if they act against their wishes.
“Despite the reforms on issues such as domestic violence, there are very few practical protections for women to be able to seek redress in cases of violence by their guardian or others,” Ms Younes said.
Saudi Arabia doesn’t recognise or allow same-sex marriages and Ms Younes said while there is no explicit law criminalising homosexuality, judges use principles of uncodified Islamic law to sanction people suspected of having sexual relations outside marriage, including adultery, extramarital and homosexual affairs, and other “immoral acts”.
In one example, a blogger from Yemen was jailed in Saudi Arabia for 10 months for “electronic crimes” after he posted a video on Twitter saying he supported equal rights for all, “including gay people” in 2020. He said he was subjected to forced anal examinations and beaten to compel him to “confess that he is gay”, according to .
“Individuals practice extreme self-censorship to able to survive their daily lives,” Ms Younes said.
This year, Saudi authorities asked Disney to cut “LGBTQ references” from its Marvel movie Doctor Strange in the Multiverse of Madness because of a brief scene in which one character refers to her “two moms”. When Disney refused, the film did not screen in Saudi cinemas.

Rainbow-coloured toys, clothing and pencil cases have also been seized from shops as part of a crackdown on homosexuality, according to the state-run Al-Ekhbariya news channel.

But haven’t things been changing?

In recent years, Crown Prince Mohammed bin Salman, who was named heir to King Salman five years ago, has been credited with spearheading a series of social reforms. They included an end to travel restrictions on women, which now means those aged over 21 are able to obtain passports and to travel overseas without a guardian’s permission.
Saudi women are no longer banned from concerts and sports events and in 2018 they gained the right to drive.
In a kingdom where women could often be seen in full-length black outfits including a niqab to cover the face, they no longer have to wear hijab headscarves, which combined with encouragement to work, has partly sparked the increasing popularity of short haircuts.

Getting more women into work is a major component of Prince Mohammed’s Vision 2030 reform plan to overhaul Saudi Arabia’s economy, make it less dependent on oil and attract foreign investors and tourists. 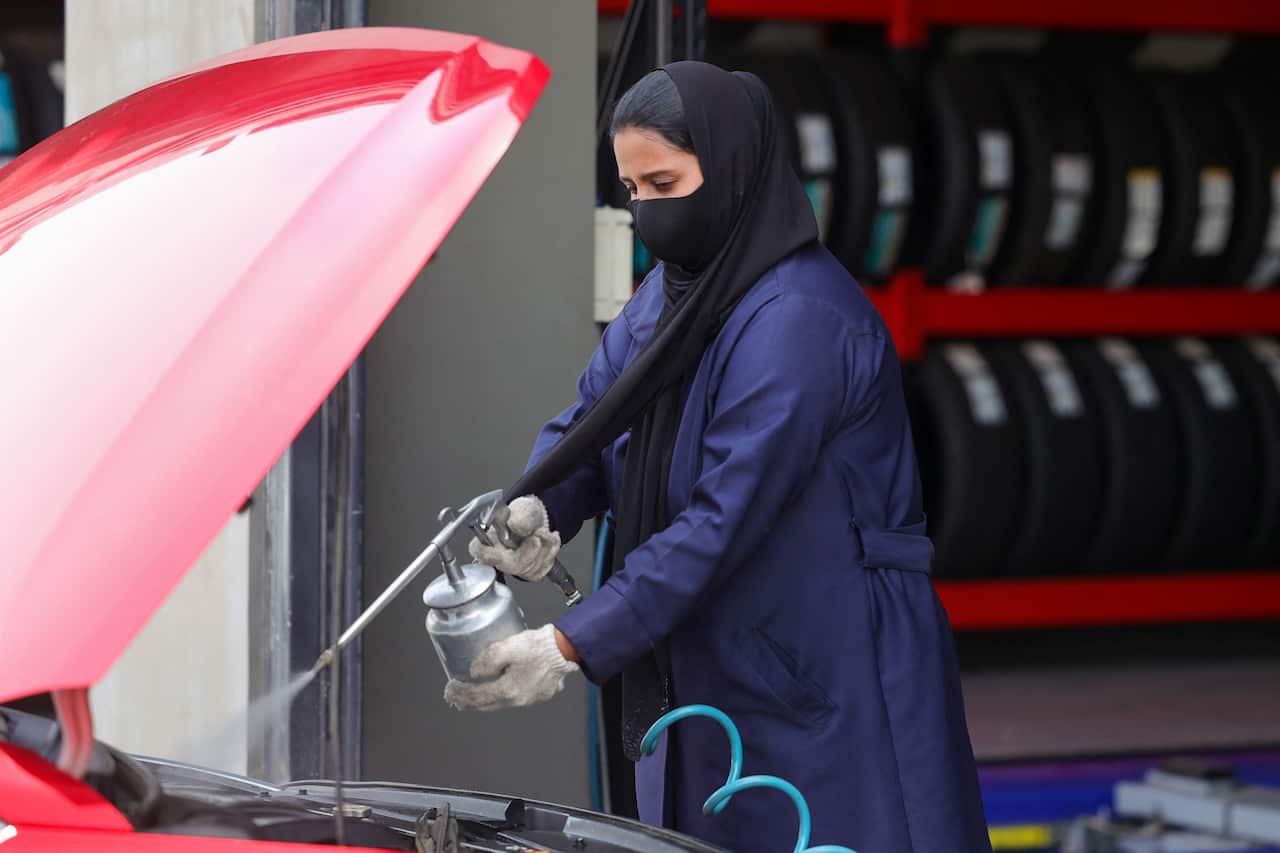 Women have been recruited to work at an auto quick service garage in Jeddah City after a nationwide push to bring more women into the workforce. Source: Getty / Fayez Nureldine/AFP

Ms Younes acknowledged the reforms, which also include allowing women to participate in politics and a better response to domestic violence, were a step in the right direction, but she said they were “incomplete”.

“Women do still require their guardian’s permission to do most [tasks],” she said.
“The guardianship system needs to completely be overhauled if Saudi Arabia is serious about ending discrimination against women.”

As an example, Ms Younes said that while women no longer need permission to work, the government does not penalise employers who require permission. Employers must also establish separate offices for men and women, and enforce a dress code for women.

In recent years Human Rights Watch has accused Saudi Arabia of trying to whitewash its human rights abuses through its courting of celebrities and hosting of large events, particularly in the wake of the 2018 murder of journalist Jamal Khashoggi in the Saudi consulate in Istanbul, Turkey.
Prince Mohammed has denied ordering the killing of Khashoggi but has said he takes responsibility for it, firing officials involved.
“There’s absolutely an attempt to ‘image launder’ Saudi Arabia,” Ms Younes said.
“The Saudi government has spent billions of dollars hosting major entertainment, cultural and sporting events as a deliberate strategy to deflect from the country’s image and as a pervasive human rights violator.”
Most recently Saudi Arabia launched a controversial bid to create its own golf tour with a prize of $255 million, which is being .
NSW Police said in a statement last month it had not yet been able to ascertain how Asra and Amaal died.
Anyone who may have information that could assist detectives is urged to contact Burwood Police Station on (02) 9745 8499 or Crime Stoppers on 1800 333 000.
Readers seeking support with mental health can contact Beyond Blue on 1300 22 4636. More information is available at beyondblue.org.au. Embracementalhealth.org.au supports people from culturally and linguistically diverse backgrounds.