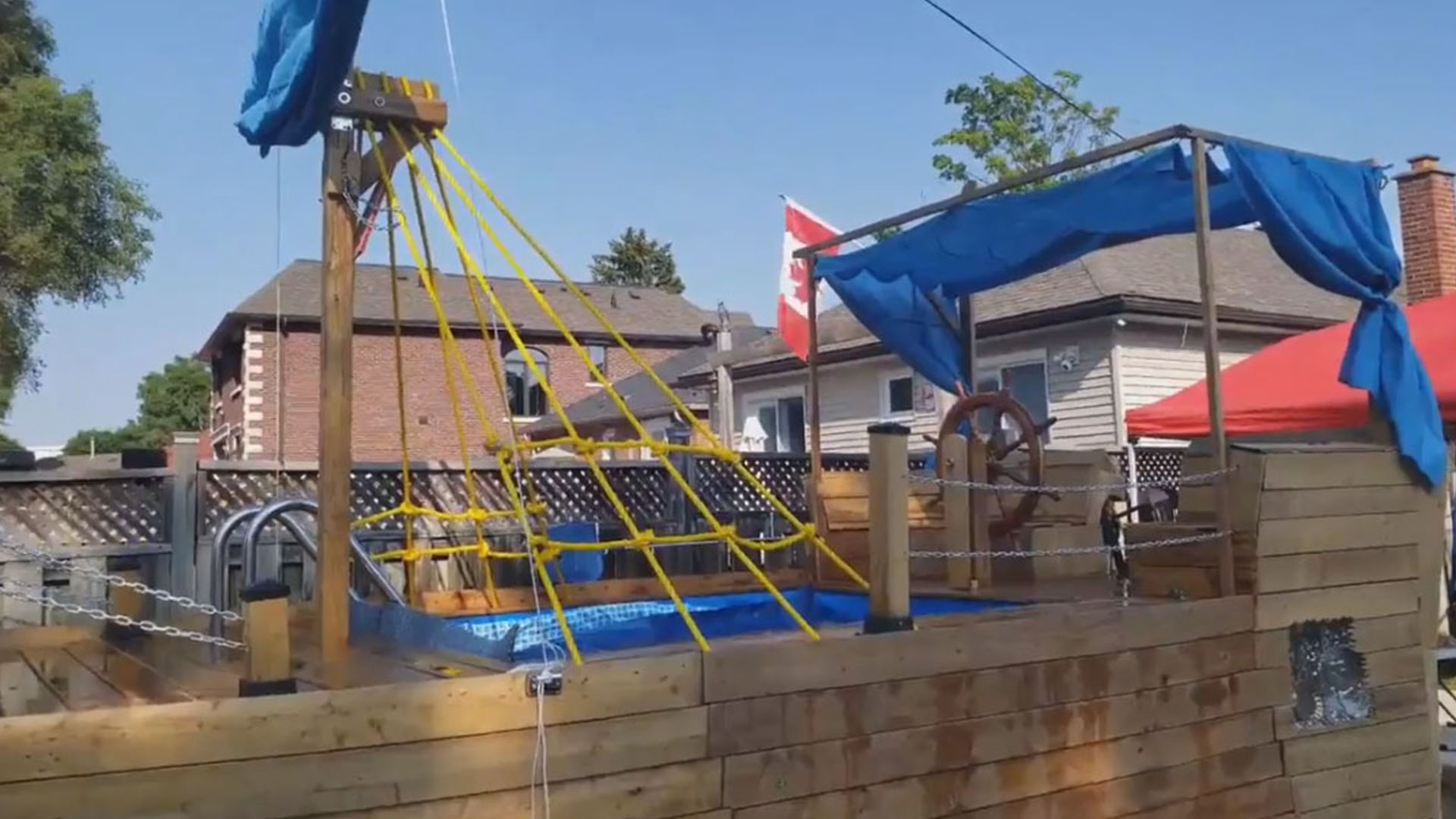 A DAD has told how he was forced to dismantle a pirate ship swimming pool he built for his kids after a petty neighbour complained to the authorities.

John Konstantinidis, from Toronto, Canada, spent eight weeks carefully crafting the structure so his children would have somewhere to play during the coronavirus pandemic.

But just a week after completion he was contacted by local authorities notifying him that the structure was in violation of city bylaws.

To make matters worse, it emerged that the complaint had been lodged by an anonymous neighbour who claimed the “large structure was too close to the property line.”

“A pool such as this one requires a pool permit which ensures the pool is properly fenced in,”  a city statement said at the time.

“In addition, the structure itself is larger than 10 x 10, and therefore requires a building permit.”

The father was left heartbroken at the decision and quickly set about dismantling the structure and moving it further away from the fence.

At the time, the decision left his kids, aged seven and ten, in tears.

“It wasn’t easy at all but it was a lesson for them too. Life doesn’t always bring what they expect.”

The Dad made it his mission to keep the family’s right to maintain the pirate ship featuring a deck and wooden pool.

“We are not above the law,” Konstantinidis told reporters. “But don’t make me take it down.”

But, along his wife Voula, he was left furious at the actions of the petty neighbour who failed to speak them before lodging the “hurtful” complaint.

“They don’t understand why our neighbours are being like that. “What do you say to them as a parent,” Voula said, referring to having to tell her children the devastating news.

“You try to put their mind at ease. We told them no matter what they will have some sort of pool.”

A year later, keeping their promise the couple renovated and updated the ship in keeping line city by laws.

It included improved safety measures, such as locks to the covered water area and a chain fence in the event the kids get too close to the edge.

Importantly, the structure has become a staple of the local community, bringing lots of joy to other children in the neighbourhood.

It also sparked an interest in construction among Konstantinidis’s two children, who labelled their dad’s skills as “the best in the world.”

While his brother Michael added: “What I feel about my dad building this, is he’s the best dad in the world and I appreciate it.”

Despite the happy ending for this family, not all neighbour feuds come to a such a pleasant conclusion.

In one case, a dad claimed his life was turned upside down after his neighbour decided to knock down his house and rebuild it with decking high enough to see into his garden.

The father said he wasn’t told about his neighbour drastic redesign plans until demolition started next door.

And a woman was left fuming after her neighbour allegedly “crammed” a huge paddling pool into her garden.

The raging resident said the neighbour “practically lived in it” all week despite sitting just metres away from her own property.