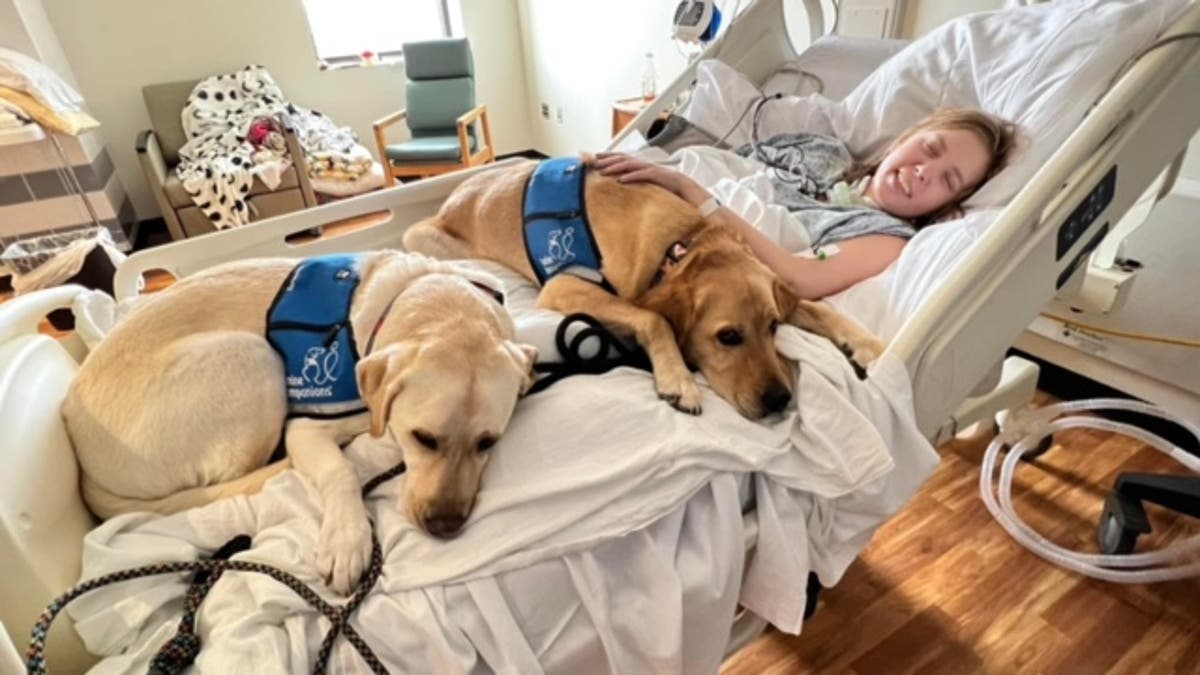 Darlene Jensen was texting with her 28-year-old daughter, Caitlin, on an uneventful Thursday morning in June as the recent college graduate headed in for a routine neck adjustment at a chiropractor appointment she’d nearly cancelled.

Caitlin read her mother’s last text at 9am. Twenty one minutes later, Ms Jensen got a call: her daughter was having a reaction to the treatment, the chiropractor said.

She’s been unable to respond to her mother’s texts ever since – or walk, talk, eat or breathe properly on her own.

In a rare but very real tragedy, Caitlin’s neck adjustment appointment resulted in vertebral artery dissection, which causes stroke – cutting off blood flow to the brain. Her decline was rapid, and she faces a long, arduous recovery.

Ms Jensen, 49, had no idea what lay ahead when she left her job managing the front office of a transmission shop outside of Savannah, Georgia, to get to her daughter. She didn’t even tell her son, who was working with her for the summer while on break from Georgia Southern University, exactly what was going on.

“I just thought, she’s probably got vertigo or something,” Ms Jensen tells The Independent. “I mean, it just never occurred to me that it was a serious issue. So I just said, you know, I’m gonna run up and check on her. I’ll be back in a little bit.”

When Ms Jensen – whose high school sweetheart husband died when Caitlin was a toddler – arrived at the chiropractor’s office, however, she was shocked to realize just how dire the situation seemed to be; her daughter was already in an ambulance.

“It was clear that something was wrong,” Ms Jensen says. “Her speech wasn’t right. She was very sweaty and nauseous; she was vomiting.”

Even then, Ms Jensen says: “It didn’t occur to me that she was having a stroke.”

“I’ve never seen anybody have a stroke; I did not know the signs and symptoms of a stroke,” she says. “I did not expect a 28-year-old, perfectly healthy young woman to be having a stroke.”

Caitlin was whisked away and eventually put on a ventilator; she’s now been moved to the acquired brain injury unit in Atlanta’s Shepherd Center, where Ms Jensen is sleeping in her daughter’s room, more than four hours from home.

It’s a far cry from where she thought Caitlin would be right now. When her daughter went to the chiropractor two months ago, she’d just graduated from Georgia Southern with a degree in biology and chemistry and was applying to a job researching microplastics in wastewater and the environment.

Studying for that degree is what led Caitlin to seek the care of a chiropractor in the first place, her mother says.

“She was sitting at her desk every day studying,” Ms Jensen says. “She was really tense, because it was really hard. So she was clenching her jaw and, you know, just kind of tight. And we thought … maybe going to the chiropractor will just help loosen everything up.”

Caitlin had only been a few times before, and the June appointment was scheduled by the office after the previous adjustment, Ms Jensen says.

“She’s like, ‘I don’t think I need to go,’” her mother says, adding that she told Caitlin to “just keep your appointment, because we’re responsible people that don’t cancel things at the last minute … so she went.”

The appointment was on 16 June and, within the hour, Caitlin was in the hospital. Two months later, she’s been moved to Shepherd, where she’s made some progress and has been removed from a ventilator, Ms Jensen says, adding that her daughter’s cognitive abilities seem to have thankfully been spared.

“Our main form of communication right now is, we’ll go through the alphabet,” Ms Jensen says. “And she’ll let me know when I’ve gotten to the right letter, and I just spell everything out.

“She can also nod and thumbs up, and she can mouth things; sometimes I can get it, sometimes not. Really, right now, [we are] spelling everything out. Thankfully, she’s a very good speller. But, yeah, we just spell everything out painstakingly.”

Caitlin has asked for a watch to keep track of the time; she’s been kept from social media but the presence of support dogs makes the lifelong animal love “light up,” her mother says.

While it’s comforting and heartening to know that her daughter’s brain damage has not dampened her sharpness or personality, Ms Jensen says, Caitlin has recently been “pretty emotional and upset.

“The reality of everything is hitting her right now,” she says. “So she’s had a very emotional, difficult week.”

Recovery will, undeniably, be difficult – though support has been unwavering; a GoFundMe has raised almost $100,000 to go towards Caitlin’s daunting medical bills, and messages of support keep coming in as she fights to regain function. The cards and well wishes she’s received in the past two months have been helping her spirit, Ms Jensen says.

“We’re still working to try to get her right side to reconnect,” she tells The Independent. “We’ve got to work on the muscles associated with swallowing, you know, protecting her own airway, her diaphragm, sneezing, coughing, you know, all of the things that she needs to do to be able to be unassisted with her breathing.

“We’re still working through all of that … The ventilator has been removed. She is breathing on her own. She’s still breathing through the trach; we can’t remove that yet. But I mean, it’s a huge step forward that she’s breathing that way.”

Ms Jensen is staying in a fold-out bed in Caitlin’s room, explaining how she “can’t leave her because she still has a lot of secretions and is still aspirating on her own saliva – because those muscles aren’t working properly.

“So she can get kind of clogged up in there. She needs to be suctioned out regularly. And if it gets too bad in there, then it can block her airway. And it has [been] a couple of times we’ve had some scary moments where she’s had, you know, a code blue.”

“I had never heard of anything like this happening,” she tells The Independent. “I didn’t know it could happen. So it just wasn’t on my radar.”

She says: “That is one of the things that I really think people need to be aware of … what the symptoms and signs are of a stroke, and that it can happen from something like this – from having a neck adjustment at a chiropractor.

“I’ve had numerous people reach out to me since then; I had one reach out to me today that is a quadriplegic because of it,” she says, adding: “People need to be aware of the risks associated with having neck adjustments at a chiropractor.

According to a piece published last year in Stroke: Vascular and Interventional Neurology, vertebral arterial dissection “can result from trauma of varying severities ‐ from sports, motor vehicle accidents, and chiropractor neck manipulations to violent coughing/sneezing.

“It is estimated that 1 in 20,000 spinal manipulation results in vertebral artery aneurysm/dissection. In the United States, patients who have multiple chronic conditions are reporting higher use of complementary or alternative medicine, including chiropractic manipulation,” the report states.

“Education about the association of VAD and chiropractor maneuvers can be beneficial to the public as these are preventable acute ischemic strokes. In addition, vertebral artery dissection symptoms can be subtle and patients presenting to chiropractors may have distracting pain masking their deficits.”

Chiropractors argue that dissection itself can be the cause of the pain leading patients to seek care – claiming their own adjustments were ancillary to a larger problem in many cases.

Ms Jensen, however wants the public to learn about arterial dissection and how easily – and innocuously – it can happen.

It happened to her family; she knows.

“I think people should just avoid neck adjustments, for one thing,” she tells The Independent. “If they are really insistent and they think they need a neck adjustment, then a good chiropractor will do X rays. There should be an MRI done, there should be extensive tests done first, before they ever touch your neck with any sort of adjustment.

“And truthfully, I just think chiropractors should not do them at all.”

For the moment, though, Ms Jensen is just looking forward and spending every waking moment with her daughter; Caitlin’s younger brother has returned to school at Georgia Southern, but his big sister’s spirit hasn’t faltered.

“She’s really, right now, wrapping her head around it all – but she will,” Ms Jensen tells The Independent. “She’s so strong and so determined.”

“And she is doing the work,” she says. “So I know. I do really think that we will be able to do amazing things.”