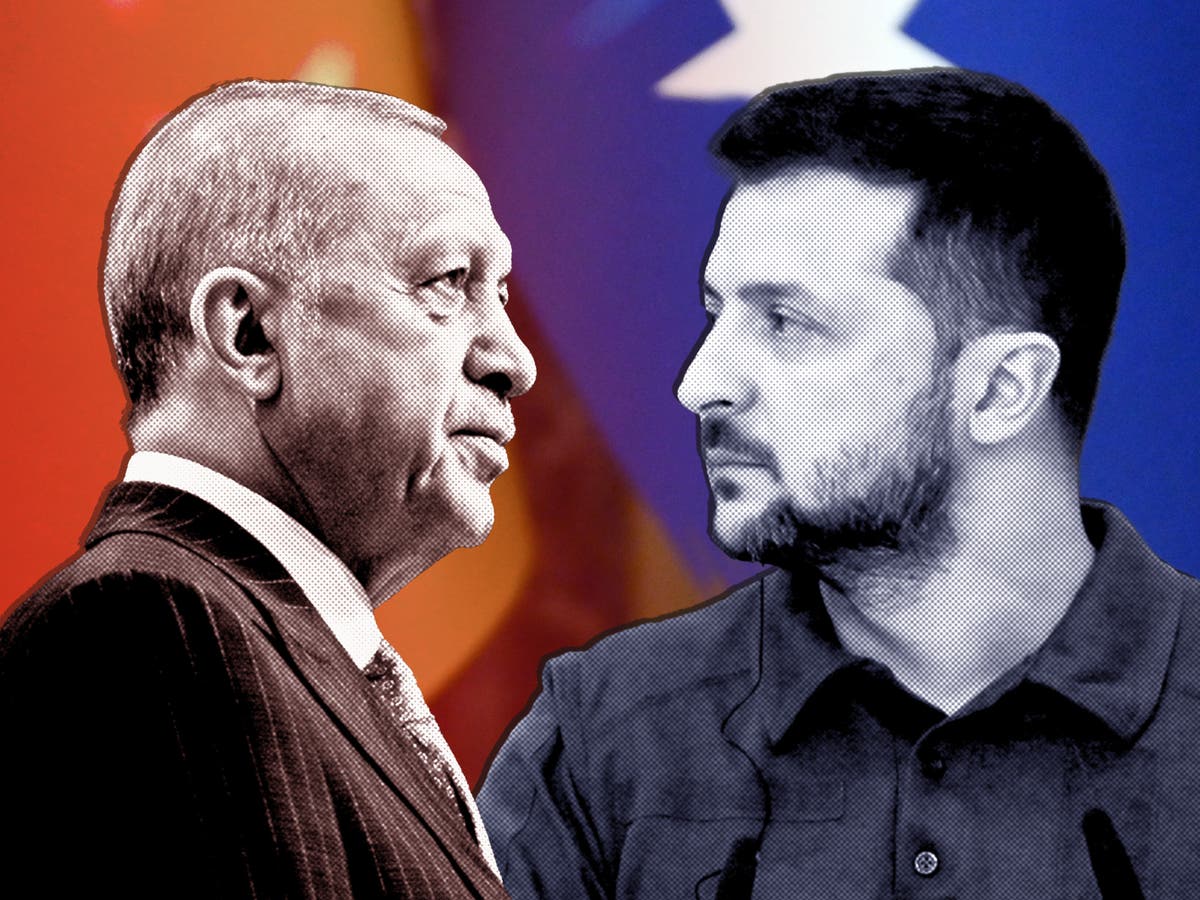 Turkey’s Recep Tayyip Erdogan is travelling to Ukraine for a meeting with president Volodymyr Zelensky that will highlight Ankara’s multi-faceted role in the war in eastern Europe.

The visit, set to take place in the western Ukrainian city of Lviv, will also involve United Nations secretary general Antonio Guterres, who will then head to the Black Sea port city of Odesa and to Istanbul on 20 August.

The meetings in Lviv on Thursday will focus on efforts to get grain imports out of the country and to secure a Ukrainian nuclear power plant caught in the crossfire.

While Turkey’s politically well-connected defence industry has sold Ukraine key military equipment such as Bayraktar TB-2 drones, Mr Erdogan’s first trip to Ukraine since the war began comes amid concerns that Ankara is being too accommodating of the Kremlin’s interests. Earlier this month, Mr Erdogan took part in a closed-door visit to liaise with president Vladimir Putin in the resort city of Sochi.

“Obviously Erdogan has a lot of skin in the game,” said Michael Bociurkiw, a Kyiv-based global affairs analyst and senior fellow at the Atlantic Council, a Washington think tank. “He’s positioning himself as a regional statesman able to talk with world leaders. He’s in a unique position – geographically, diplomatically and strategically.”

UN spokesperson Stephane Dujarric said the meetings in Lviv would focus on the overall conflict in Ukraine, including threat of a catastrophic mishap at the Russian-occupied Zaporizhzhya nuclear power plant, Europe’s largest and the scene of intense fighting in recent weeks.

Mr Zelensky has accused Russia of using the six-reactor nuclear facility to fire weapons at Ukrainian positions, knowing that Ukraine would be cautious about firing back. Moscow has resisted entreaties to hand the site over to UN nuclear inspectors.

Turkey says the meeting will cover all aspects of relations between Ankara and Kyiv as well as “ending the Ukraine-Russia war through diplomatic avenues.”

With exclusive control over the gateway into the Black Sea, Turkey hosts the multilateral coordination centre through which eastern European grain is being shipped to the rest of the world. Since the centre launched 1 August, at least 21 shipments have made their way out of Black Sea ports, easing global famine worries.

The relative success of the grain deal, which was brokered by Turkey and the UN, has surprised some observers. Ukraine is the world’s largest exporter of grains, and the shipments help Kyiv’s war effort.

Still, 20 million tonnes of grain from the 2021 harvest remain in storage, and hundreds of more ships will be needed to get it to world markets in the coming months.

While Turkey benefits diplomatically from the success of the grain shipments, it also profits by ignoring western sanctions on Moscow. It continues to welcome Russian capital and citizenry, keeping it in good graces with the Kremlin. Turkey’s exports to Russia have jumped to an eight-year high, and Ankara’s transport minister has been openly boasting about an increase in car sales to Russia.

While the west remains nervous about Turkey’s efforts to engage with Russia, Kyiv may appreciate Mr Erdogan’s role as interlocutor.

“Zelensky is desperate for a peace agreement, and Ukraine thinks leaving the channels of communication open to Moscow is absolutely crucial,” said Mr Bociurkiw. “Erdogan is playing a role that I don’t think even the UN secretary general can play.”