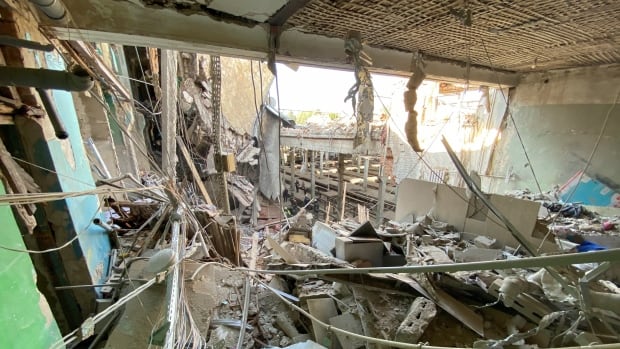 Ukrainian forces said on Thursday they had beaten back a Russian attack in the southern region of Kherson, while the death toll from Russian shelling of Kharkiv in Ukraine’s northeast climbed to seven people.

The damage came with United Nations Secretary General Antonio Guterres due to meet Ukrainian President Volodymyr Zelenskyy and Turkish President Tayyip Erdogan later on Thursday in the western Ukrainian city of Lviv. There, they will discuss ways to find a political solution to the war, address the threat to global food supplies, and discuss the risk of a disaster at Europe’s largest nuclear power plant, which has been taken over by Russian forces.

The war has forced millions to flee, killed thousands and deepened a geopolitical rift between the West and Russia, which says the aim of its operation is to demilitarize its neighbour and protect Russian-speaking communities.

“Russian forces have achieved only minimal advances, and in some cases we have advanced, since last month,” Ukrainian presidential adviser Oleksiy Arestovych said in a video.

“What we are seeing is a ‘strategic deadlock.’”

“This is a devious and cynical strike on civilians with no justification,” Zelenskyy said on the Telegram messaging app.

One person was killed and 18 were wounded on Thursday in pre-dawn shelling of another residential area of Kharkiv, Oleh Synehubov, the regional governor, said.

The south district of the Operational Command of the Ukrainian Armed Forces said Ukrainian forces killed 29 “occupiers” near the town of Bilohirka, northeast of Kherson, as well as destroying artillery, armoured vehicles and a military supply depot.

Reuters was not able to independently confirm the battlefield reports.

Fighting around the Russian-occupied Zaporizhzhia nuclear power plant has raised fears of a catastrophe and Guterres has said he wants a demilitarized zone established.

Ukraine’s foreign minister, Dmytro Kuleba, said he had spoken to the director general of the International Atomic Agency, who was ready to lead a delegation to the plant.

The UN is urging inspectors with the International Atomic Agency to be allowed access to Ukraine’s Zaporizhzhia nuclear plant to check for radiation leaks after the site came under fire again over the weekend.

“I emphasized the mission’s urgency to address nuclear security threats caused by Russia’s hostilities,” he said on Twitter.

Russia accuses Ukrainian forces of recklessly firing at the plant, but Ukraine says Russia is deliberately using the reactor complex as a base to launch attacks against its population.

Russia’s foreign ministry said at a news briefing that a proposal from Guterres to demilitarize the area around the plant was “unacceptable.”

Igor Konashenkov, a spokesperson for the Russian defence ministry, told reporters Moscow was taking measures to ensure safety at the complex and denied it had deployed heavy weapons in and around the plant.

Ukrainian officials have accused Russia of planning to shut the plant to sever it from Ukraine’s power grid and switch it on to Russia’s — effectively stealing its output.

The United States, Albania, France, Ireland, Norway and Britain have asked the UN Security Council to meet on Aug. 24 to discuss the impact of the war in Ukraine, diplomats said, marking six months since Russia’s invasion.

A series of blasts at military bases and ammunition depots in the past week in Crimea, the Black Sea peninsula annexed by Russia in 2014, has suggested a shift in the conflict, with Ukraine apparently capable of striking deeper into Russian-occupied territory.

Russia blamed saboteurs for the attacks, while Ukraine has not officially taken responsibility but has hinted at it.

Ukrainian military intelligence said in a statement that after the recent explosions in Crimea, Russian forces had urgently moved some of their planes and helicopters deeper into the peninsula and to airfields in Russia. Reuters could not independently verify the information.