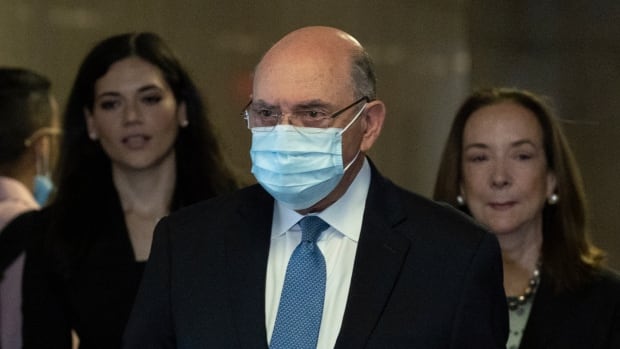 A top executive at former U.S. president Donald Trump’s family business pleaded guilty Thursday to evading taxes in a deal that could potentially make him a star witness against the company at a fall trial.

Trump Organization chief financial officer Allen Weisselberg pleaded guilty to all 15 of the charges he faced in the case, which included charges of tax fraud, grand larceny and falsifying business records. He was accused of dodging taxes on lavish fringe benefits he got from the company, including lease payments for a luxury car, rent for a Manhattan apartment and private school tuition for his grandchildren.

Seen as one of Trump’s most loyal business associates, Weisselberg was arrested in July 2021. He is the only person to face criminal charges so far in the Manhattan district attorney’s long-running investigation of the company’s business practices.

Judge Juan Manuel Merchan agreed to sentence Weisselberg, 75, to five months incarceration and five years probation at New York City’s Rikers Island jail complex, although he will be eligible for release much earlier if he behaves well behind bars. The judge said Weisselberg will have to pay nearly $2 million US in taxes, penalties and interest.

Weisselberg said nothing as he left court, offering no reply when a journalist asked him whether he had any message for Trump.

Weisselberg’s lawyer, Nicholas Gravante Jr., said his client pleaded guilty “to put an end to this case and the years-long legal and personal nightmares it has caused for him and his family.”

“We are glad to have this behind him,” the lawyer said.

The plea bargain also requires Weisselberg to testify truthfully as a prosecution witness when the Trump Organization goes on trial in October on related charges. The company is accused of helping Weisselberg and other executives avoid income taxes by failing to accurately report their full compensation to the government.

Trump himself is not charged in the case.

Testimony by Weisselberg could potentially weaken the Trump Organization’s defence. If convicted, the company could face fines or potentially be placed on probation and be forced to change certain business practices.

Reaction from the Manhattan DA:

Weisselberg pled guilty to all 15 charges contained in the indictment, and in doing so specifically implicated the Trump Organization in the criminal charges. We look forward to proving our case against the company in court.

Weisselberg’s professional relationship with Trump and Trump’s later father, Fred, dates back to 1973.

“Today Allen Weisselberg admitted in Court that he used his position at the Trump Organization to bilk taxpayers and enrich himself,” Manhattan District Attorney Alvin Bragg said in a lengthy statement.

“We look forward to proving our case in court against the Trump Organization,” said Bragg.

Weisselberg will join Michael Cohen as another person from Trump’s business circle to serve prison time.

Cohen pleaded guilty in August 2018 to violating campaign finance law by directing payments of $130,000 to adult film performer Stormy Daniels and $150,000 to Playboy model Karen McDougal to avert a scandal shortly before the 2016 presidential election. Cohen served a three-year prison term for that and other offences and has become a vociferous Trump critic.

Both women have said they had sexual encounters with Trump and the money was meant to buy their silence. Trump has denied the extramarital affairs but has never explained why the payments were therefore necessary.