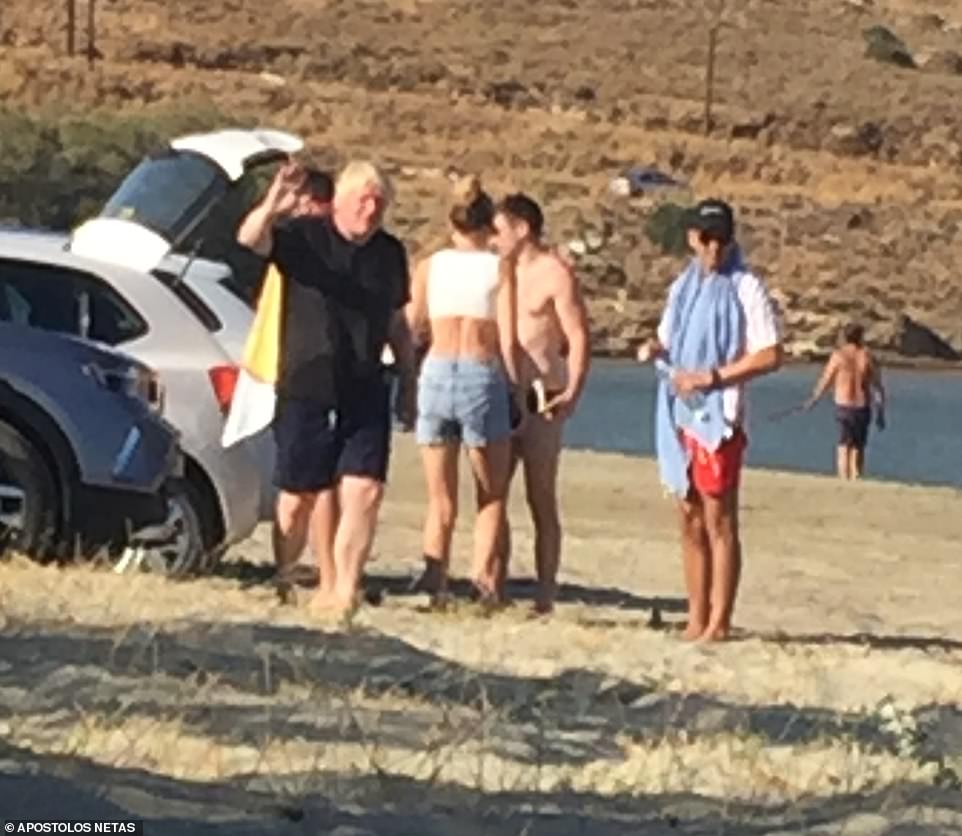 Boris and Carrie Johnson have been pictured enjoying another family trip to the beach while on holiday in Greece.

The Johnsons arrived at Livadakia beach in Karystos, Greece at 6pm today along with their two children – Wilfred and Romy – and a group of men, which is thought to include bodyguards for the Prime Minister and his family.

Boris waved to a member of the public who took a picture of the group, while his wife Carrie was speaking to a man wearing swimming trunks.

The PM was also seen taking a dip in the sea during today’s outing.

The Johnsons’ jaunt to Greece – their second foreign holiday in as many weeks – comes after their trip to Slovenia for a belated honeymoon.

Boris and Carrie Johnson arrived in an SUV at Livadakia beach in Karystos, Greece at 6pm. Shortly after, two more cars arrived with two children – believed to be Wilfred and Romy – and a group of four men, which is thought to include bodyguards for the Prime Minister and his family 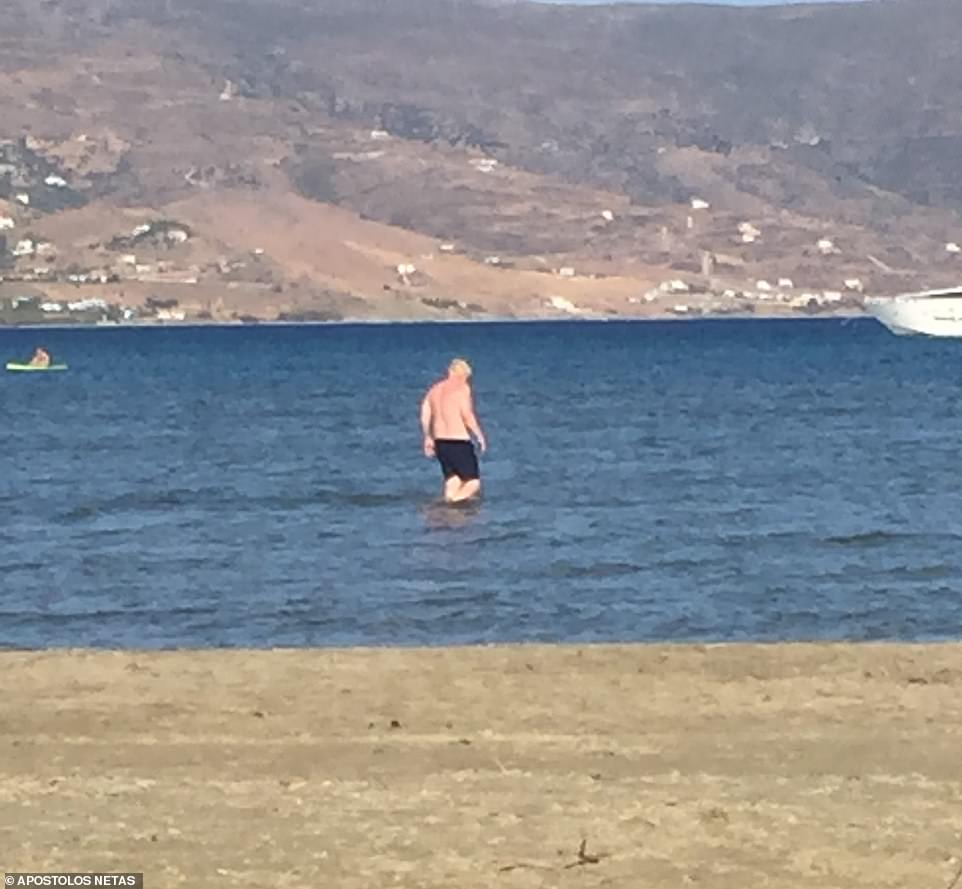 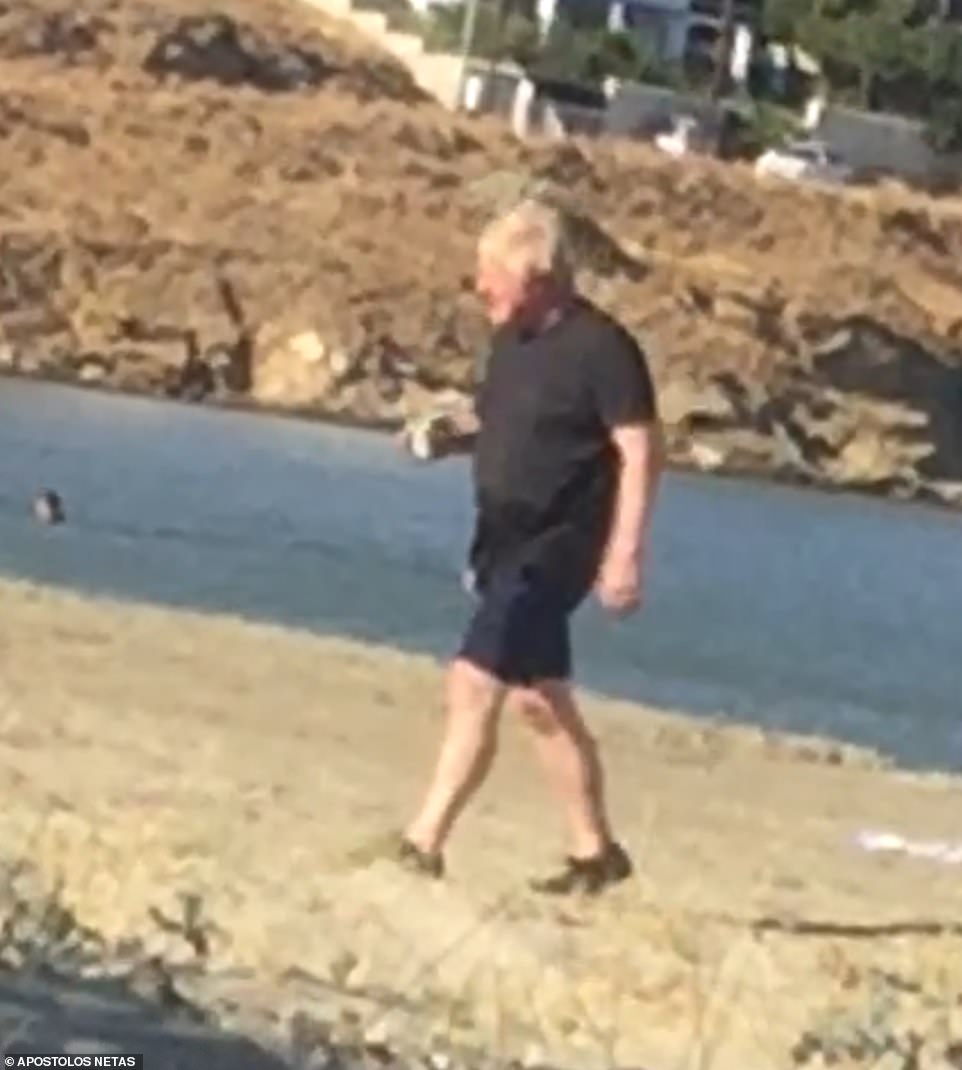 Senior Tories have previously insisted the PM is ‘still working’ despite being pictured enjoying the late August sunshine in the tourist hotspot and lounging at a restaurant called The Aegean in Karistos.

He was also seen arriving at Athens Airport on the weekend while carrying his son Wilf’s backpack.

The Prime Minister’s family have been pictured several times during their recent Mediterranean escape.

Mr Johnson, 58, was spotted showing off his figure with outstretched arms as wife Carrie and their young family enjoyed a secluded spot on the Greek island of Evia just a week after returning from their spa holiday in Slovenia.

Locals were astonished at the Johnsons’ choice of sunbathing spot as they described the PM’s demeanour as ‘chilled’ as he read a book in baking 93F heat while his son, Wilf, paddled in the nearby water.

One resident told the Sun: ‘I’ve no idea how Boris found that beach – even locals who have lived here for years don’t know it and his group were the only people there.

‘It’s a lovely spot but there was no shade in the 34C (93.2F) heat so he couldn’t have stayed there for too long with his kids.’ 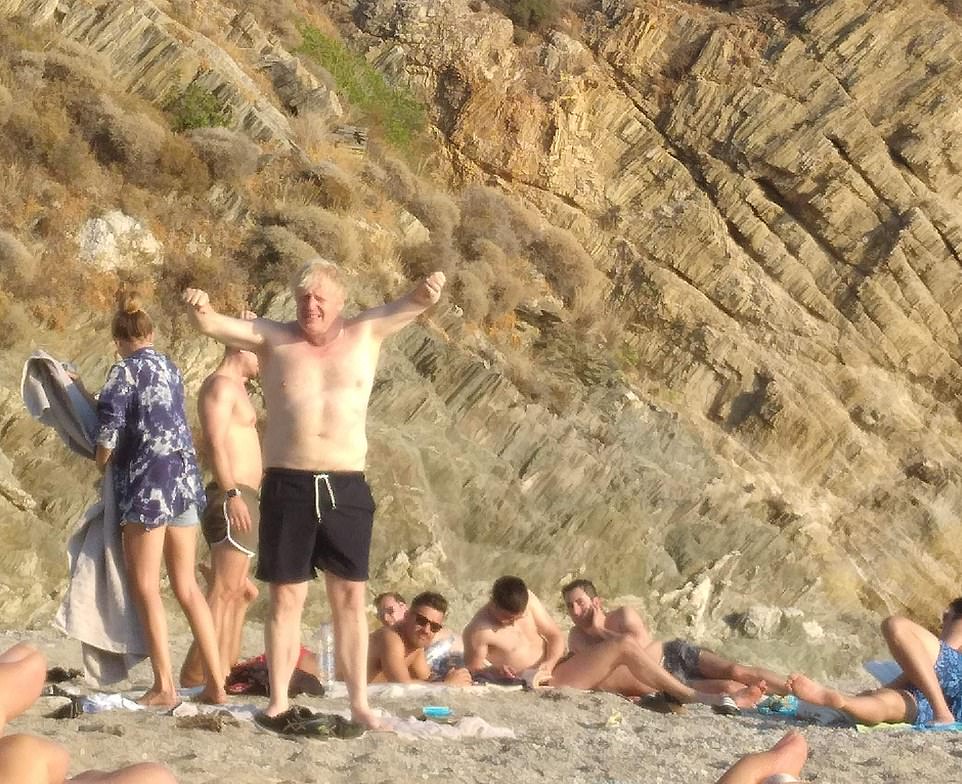 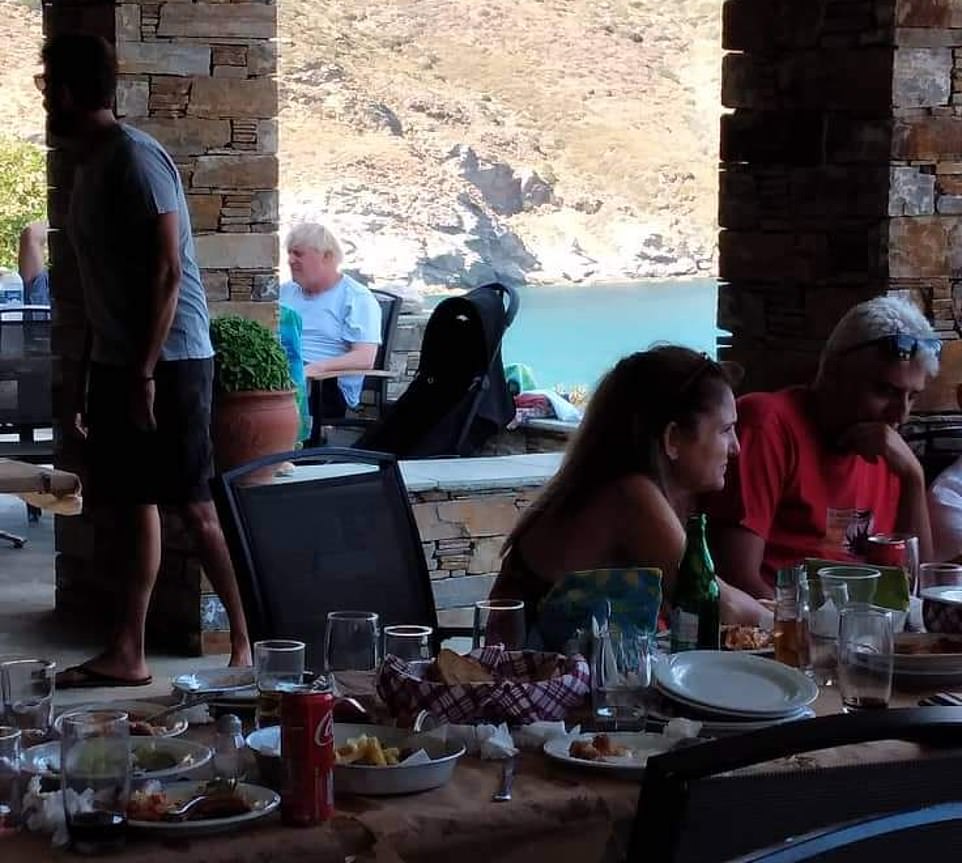 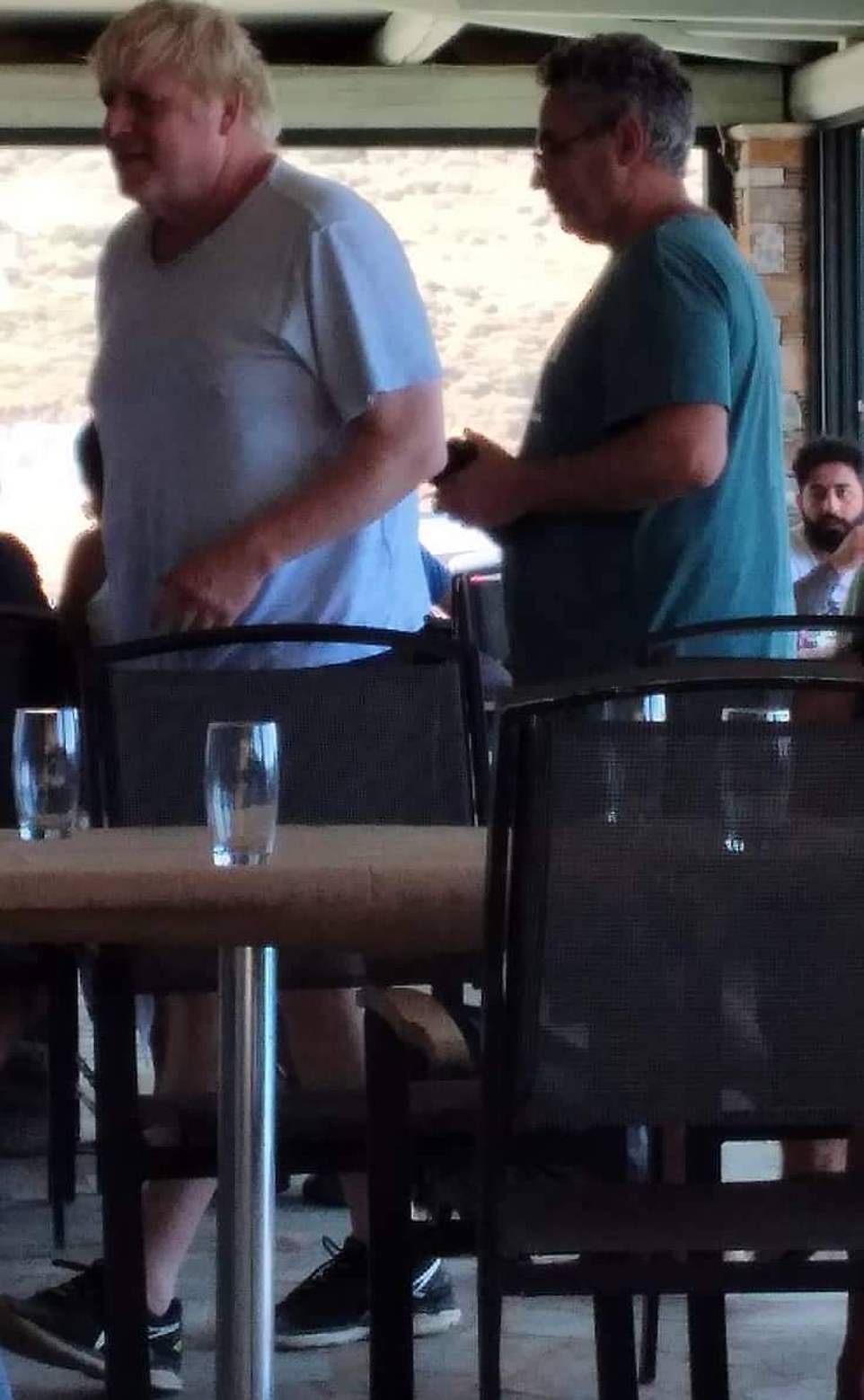 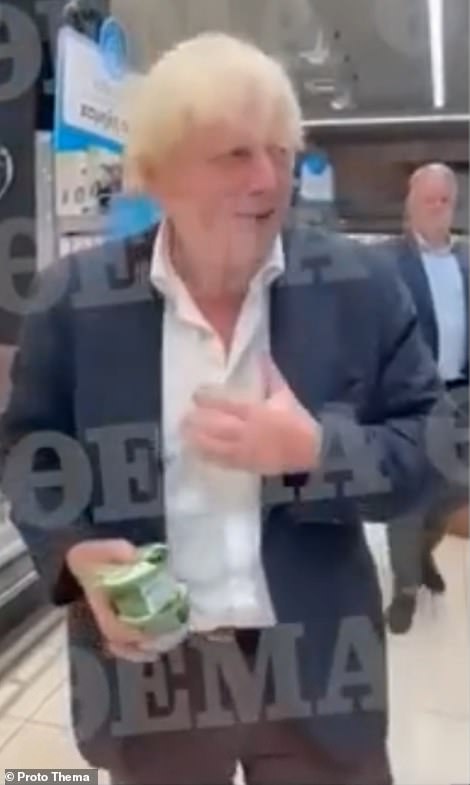 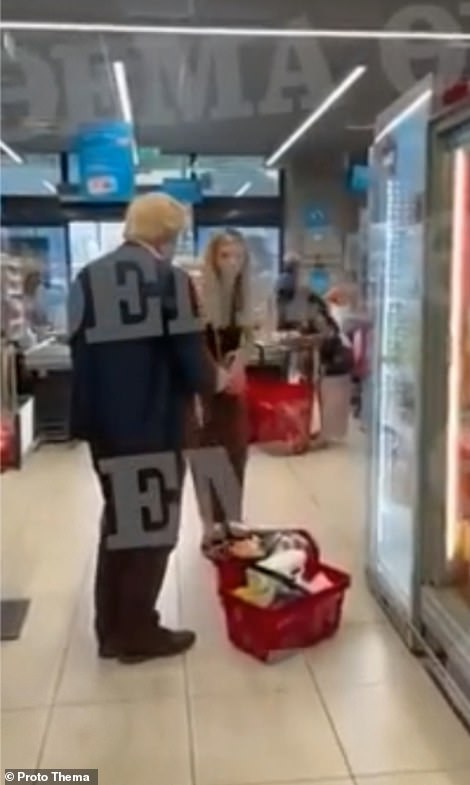 The outgoing premier was seen shopping for groceries with his wife, Carrie, as they filled baskets with food

Exclusive photographs obtained by MailOnline showed the PM waltzing around an eatery which looks out onto the stunning River Beach and the Aegean sea, while earlier in the day he was spied shopping for groceries with his wife Carrie in Nea Makri, a coastal town close to Athens.

Mr Johnson’s father Stanley has a villa a few hours away in Horto.

The couple were also filmed collecting wine and other supplies at a local shop.

They had only recently returned from a near week-long stay at Vila Planinka, in the remote mountains of Slovenia.

The resort, situated in a valley near the village of Jezersko in the Kokra Valley some 30 minutes from Slovenia’s capital Ljubljana, promises a soothing ‘balance of energies’ and where guests dine on bear prosciutto.

Labour jibed that Mr Johnson was ‘laughing’ at Britons who are struggling with a huge cost-of-living crunch, branding him a ‘lame duck’ with just weeks until he is replaced by either Liz Truss or Rishi Sunak.

Keir Starmer – just back from holiday himself – had tried to capitalise on the sense of drift in government by unveiling plans to freeze energy bills for at least six months.

The Labour leader said on the cost of living crisis: ‘We’ve got to grip it because at the moment what we’ve got is two Tory leadership candidates who are fighting each other in a sort of internal battle, where their main argument seem to be about how awful their record in Government has been and a Prime Minister who’s a lame duck because he’s acknowledged there’s a problem with energy bills, but says ‘I’m not going to do anything about it”. 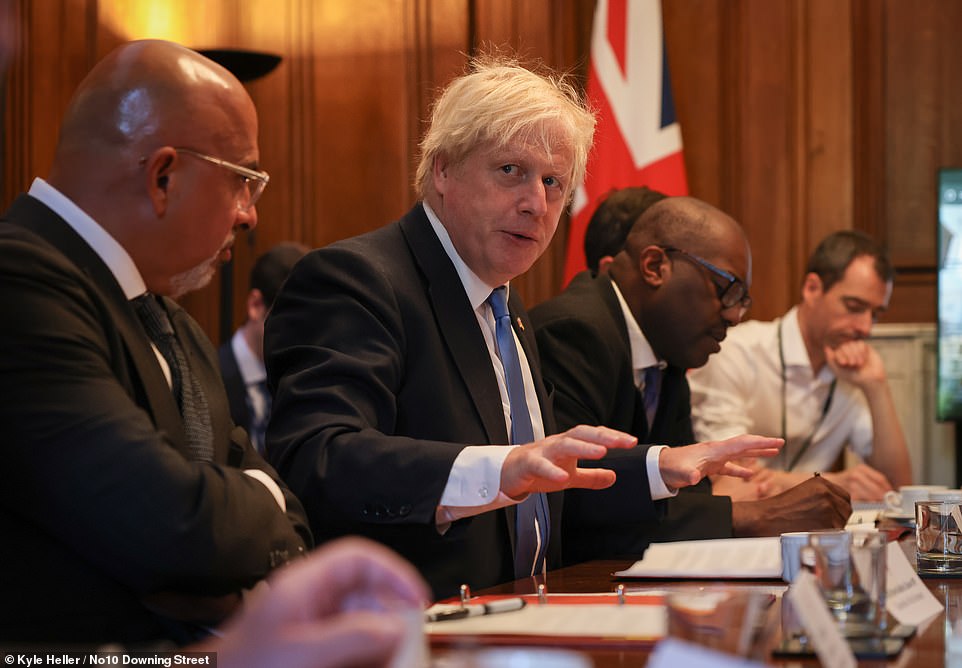 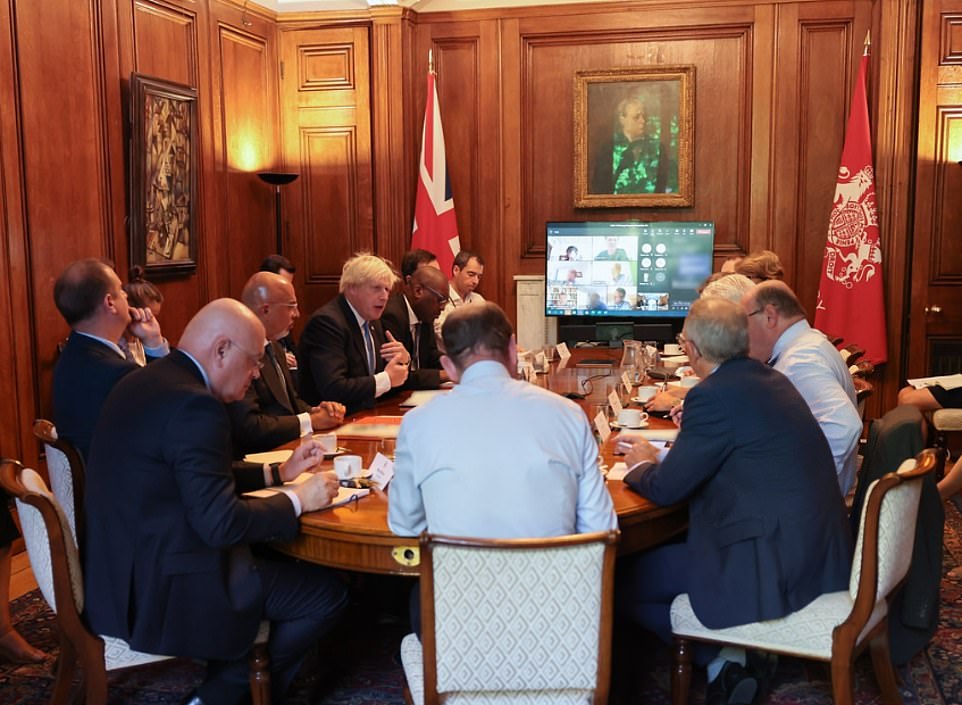 Mr Johnson’s presence at the meeting was not expected, with Mr Zahawi and Mr Kwarteng previously thought to be the ministers who would lead the talks

Ministers have defended Mr Johnson by stating he was available for calls, while the PM’s spokesman said he has no official engagements this week as he is on leave but would be involved if any urgent decisions arise.

‘The Prime Minister is on holiday this week,’ the spokesman said.

‘As is the way with prime ministers as you know by virtue of their role they’ll obviously be kept informed on any urgent issues and make decisions particularly those (related to) national security for example.’

He added: ‘If there were urgent decisions that required the PM’s input he will of course be involved in that. But the Deputy Prime Minister (Dominic Raab) is able to be deputised for meetings should they come up but as far as I’m aware there are no such meetings currently scheduled.’

Back in Westminster, two trucks were parked outside No10, with aides confirming that work was ongoing for the ‘transition’ to the next leader. Speculation that the Johnsons are shopping for a family home in Dulwich Village, south east London are mounting.

The PM is allowed to take away any of the furnishings he paid for himself as part of the controversial revamp of the residence over No11 – which could even include the £800-a-roll gold wallpaper. 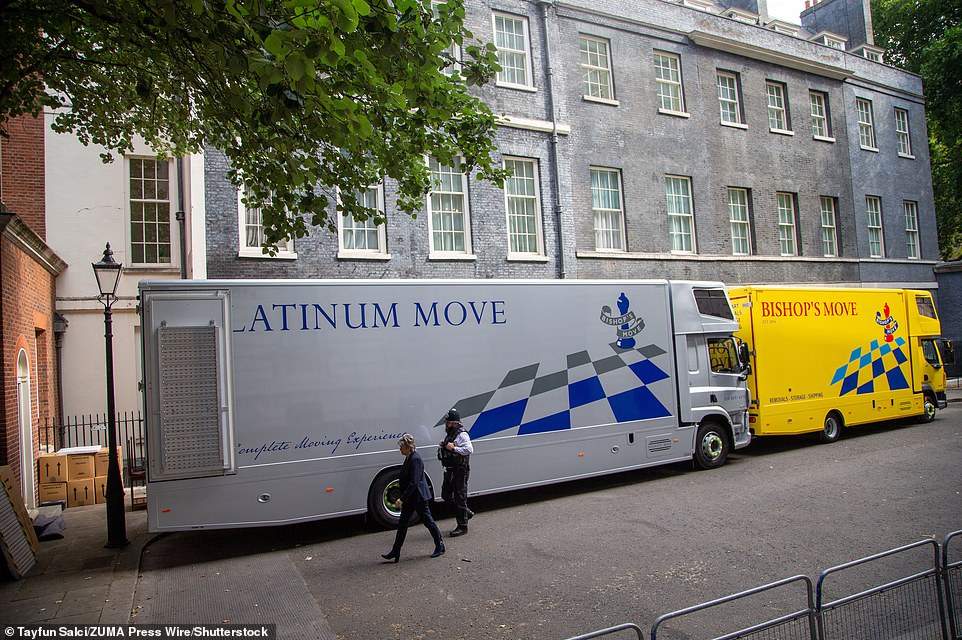 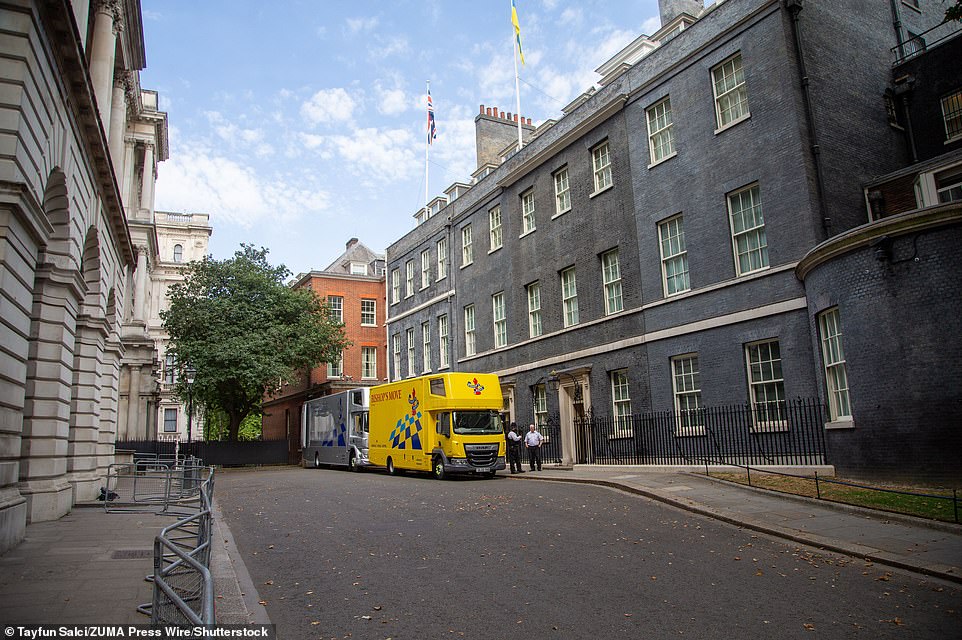 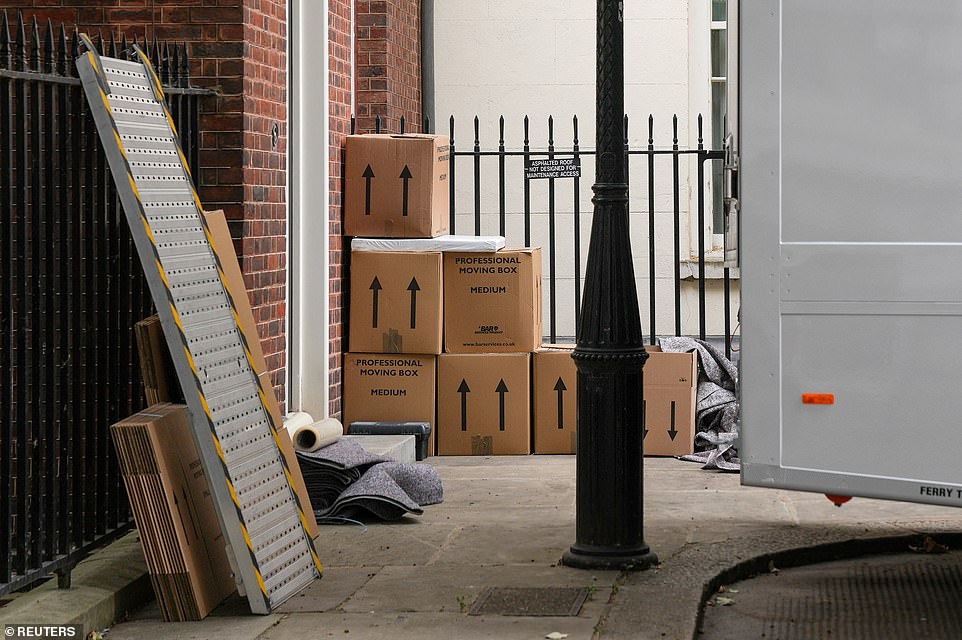 As the Bank of England predicted the UK’s worst recession since the 1990s this month, the premier was on his belated honeymoon in the alpine report of Vila Planinka in the Jezersko region of Slovenia.

The resort, situated in a valley around half an hour from Slovenia’s capital Ljubljana, promises a soothing ‘balance of energies’ and where guests dine on bear prosciutto.

He told local media: ‘We’ve had an absolutely wonderful time. We’ve climbed every available mountain, we’ve jumped in the lakes, we’ve been on bicycles and we’ve had a wonderful time.’

The outgoing Prime Minister made a surprise visit as he joined Chancellor Nadhim Zahawi and Business Secretary Kwasi Kwarteng as they grilled gas and electricity company executives over soaring prices last week.

Already stuggling families were stung by new forecasts that showed energy bills for typical households are set to soar to more than £4,200 next year.

Mr Johnson’s presence at the meeting with 15 energy firms was not expected, with Mr Zahawi and Mr Kwarteng previously thought to be the ministers who would lead the talks.

With Mr Johnson now holding a caretaker role after announcing his resignation, Downing Street has insisted any decisions on further support for Britons should be left to the new prime minister.

The PM repeated this message to energy bosses last week, telling them ‘significant fiscal decisions’ would be made by his successor. No 10 declined to comment on the Prime Minister’s holiday in Greece.