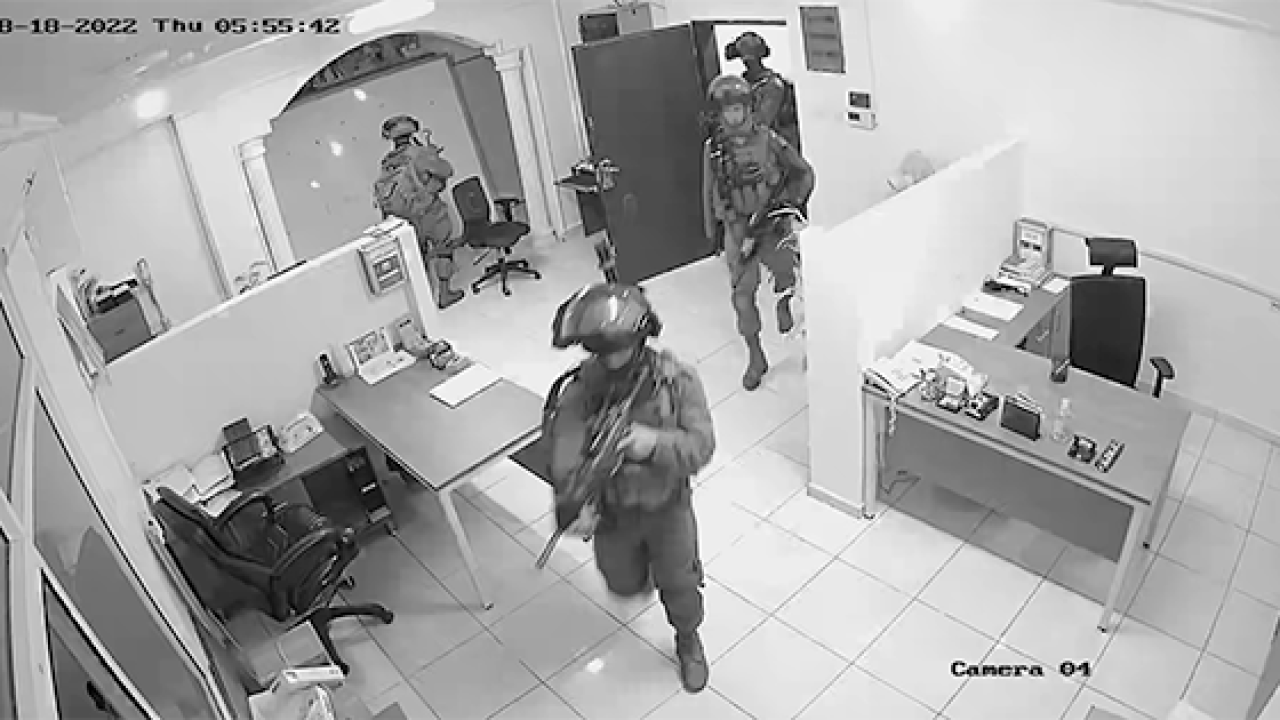 Israel’s forced closure of seven Palestinian non-government-organisations has drawn condemnation from the United Nations, which said the move appeared “totally arbitrary”.
Security forces raided the groups’ offices in the West Bank on Thursday, confiscating computers, client files and equipment before sealing off entrances, Palestinian witnesses and officials said.
The Israeli military alleged the groups were used by the Popular Front for the Liberation of Palestine (PFLP), which it has designated a terrorist organisation. .
Israel ratified the designation by law on Wednesday for three of the groups, drawing criticism from the UN and human rights watchdogs. The UN called for the designations to be revoked.
“Despite offers to do so, Israeli authorities have not presented to the United Nations any credible evidence to justify these declarations,” the UN Human Rights Office said in a statement. “As such, the closures appear totally arbitrary.”
The UN’s special rapporteur on human rights defenders Mary Lawlor described the raids as “extremely worrying”.

The US State Department said Israel said it would provide them with more information on the reasons behind closures after Washington contacted Israeli officials following the raids by security forces.

“We will review what is provided to us and come to our own conclusion,” State Department spokesperson Ned Price said at a regular news briefing.
Nine European Union countries have said they will continue working with the groups, citing a lack of evidence for the Israeli accusation.
The UN identified the groups as the Addameer Prisoner Support and Human Rights Association; Al Haq; Bisan Center for Research and Development; Defense for Children International – Palestine; Health Work Committees (HWC); Union of Agricultural Work Committees (UAWC); and the Union of Palestinian Women’s Committees (UPWC).
Palestinian officials condemned the closures, which Prime Minister Mohammad Shtayyeh said was invalid.

“These are legal institutions that work under the law,” Mr Shtayyeh told reporters during a visit to the office of Al-Haq in Ramallah. Activists hang a banner outside the Palestinian Al-Haq Foundation in the West Bank city of Ramallah after Israel raided and closed an entrance to their offices. Source: Getty / AFP / Abbas Momani

Israeli Defence Minister Benny Gantz reiterated Israel’s claim that the organisations had operated undercover to serve the PFLP, which has carried out deadly attacks on Israelis. The United States and the EU both regard the group as a terrorist organisation.

“They also assist in raising funds for the terrorist organisation via a variety of methods that include forgery and fraud,” Mr Gantz said.

An 18-year-old Palestinian, who the Israeli military alleged had shot at soldiers, was killed and at least 30 people were wounded during the clashes in Nablus, Palestinian medics said.