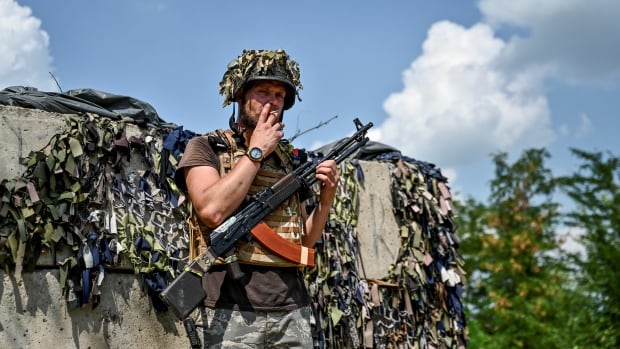 Explosions erupted overnight near military bases deep in Russian-held areas of Ukraine and Russia itself, an apparent display of Kyiv’s rapidly growing ability to wreak havoc on Moscow’s logistics far from front lines.

The explosions follow huge blasts last week at a Russian air base in Crimea. In a new assessment, a Western official said on Friday that incident had wiped out half of Russia’s Black Sea naval aviation force in a stroke.

Ukraine also issued a new warning about a front-line nuclear power station where it said it believed Moscow was planning a “large-scale provocation” as a justification to decouple the plant from the Ukrainian power grid and connect it to Russia’s.

In Crimea — which Moscow seized and annexed in 2014 — explosions were reported near an air base in Belbek, on the southwest coast near Sevastopol, headquarters of Russia’s Black Sea Fleet. On the opposite end of the peninsula, the sky was also lit up at Kerch near a huge bridge to Russia, with what Moscow said was fire from its air defences.

Inside Russia, two villages were evacuated after explosions at an ammunition dump in Belgorod province, near the Ukrainian border but more than 100 kilometres from territory controlled by Ukrainian forces.

Closer to the front, Kyiv also announced a number of strikes overnight behind Russian lines in southern Kherson province, including at a bridge at the Kakhovska Dam, one of the last routes for Russia to supply thousands of troops on the west bank of the Dnipro River.

Kyiv has been coy about its role, withholding official comment on incidents in Crimea or inside Russia while hinting that it is behind them using long-range weapons or sabotage.

Russian officials reported no one hurt in the latest explosions in Crimea or Belgorod. They said they had shot down drones in Belbek and Kerch, and confirmed that they had ordered the evacuation of two villages in Belgorod.

Video showing huge flames and smoke in the night sky, purportedly at the Russian base in Belbek, was tweeted by former Swedish Prime Minister Carl Bildt.

“It certainly looks bad — or good — dependent on the perspective,” he wrote. Reuters could not confirm the authenticity of the video.

A Western official indicated on Friday that at least some of the incidents were Ukrainian attacks, saying Kyiv was now consistently achieving “kinetic effects” deep behind Russia’s lines. Such attacks were hurting Russia’s forces and having a “a significant psychological effect on the Russian leadership,” the official said, on condition of anonymity.

Russian losses at Crimean air base

Huge explosions on Aug. 9 at Russia’s Saky air base on the Crimean coast had “put more than half of Black Sea Fleet’s naval aviation combat jets out of use,” the official said, offering a new damage assessment of what would be one of the most costly attacks of the war.

Russia has denied any aircraft were damaged in what it called an accident at the base, although commercial satellite pictures showed at least eight warplanes completely burned out and several huge impact craters. Moscow sacked the head of the Black Sea Fleet this week.

Ukraine hopes its apparent new-found ability to hit Russian targets behind the front line can turn the tide in the conflict, disrupting supply lines Moscow needs to support its occupation.

Since last month, Ukraine has been fielding advanced rockets supplied by the West to strike behind Russian lines. The overnight explosions in Crimea and Belgorod are beyond the range of ammunition Western countries have acknowledged sending so far.

In recent days, Kyiv has been issuing warnings to Russians, for whom Crimea has become a popular summer holiday destination, that nowhere on the peninsula is safe as long as it is occupied.

When the coastal air base was hit last week, Russian tourists were photographed at nearby beaches, staring up from cabanas at huge mushroom clouds in the sky.

Ukraine’s nuclear power operator said on Friday it suspected Moscow was planning to decouple the Zaporizhzhia nuclear power plant from Ukraine’s grid and hook it up to Russia’s, a complex operation that Kyiv says could cause a disaster.

The power station is held by Russian troops on the bank of a reservoir; Ukrainian forces control the opposite bank.

Moscow has rejected international calls to demilitarize the plant and Putin on Friday renewed his accusation that Kyiv was shelling it in a phone call with French President Emmanuel Macron, according to Kremlin’s readout of the call.

It said Putin warned of a “danger of a large-scale catastrophe that could lead to radiation contamination of vast territories.”

Kyiv denies this and says Russia is using the plant as a shield for forces to fire at Ukrainian-held cities. Reuters cannot independently verify the military situation at the plant.

The United Nations and Ukraine want to reach an agreement to end fighting around Europe’s largest nuclear plant, but Russia has called the idea of a demilitarized zone unacceptable.

An IAEA spokesperson said it was in active consultations with all parties to send its mission “as soon as possible.”