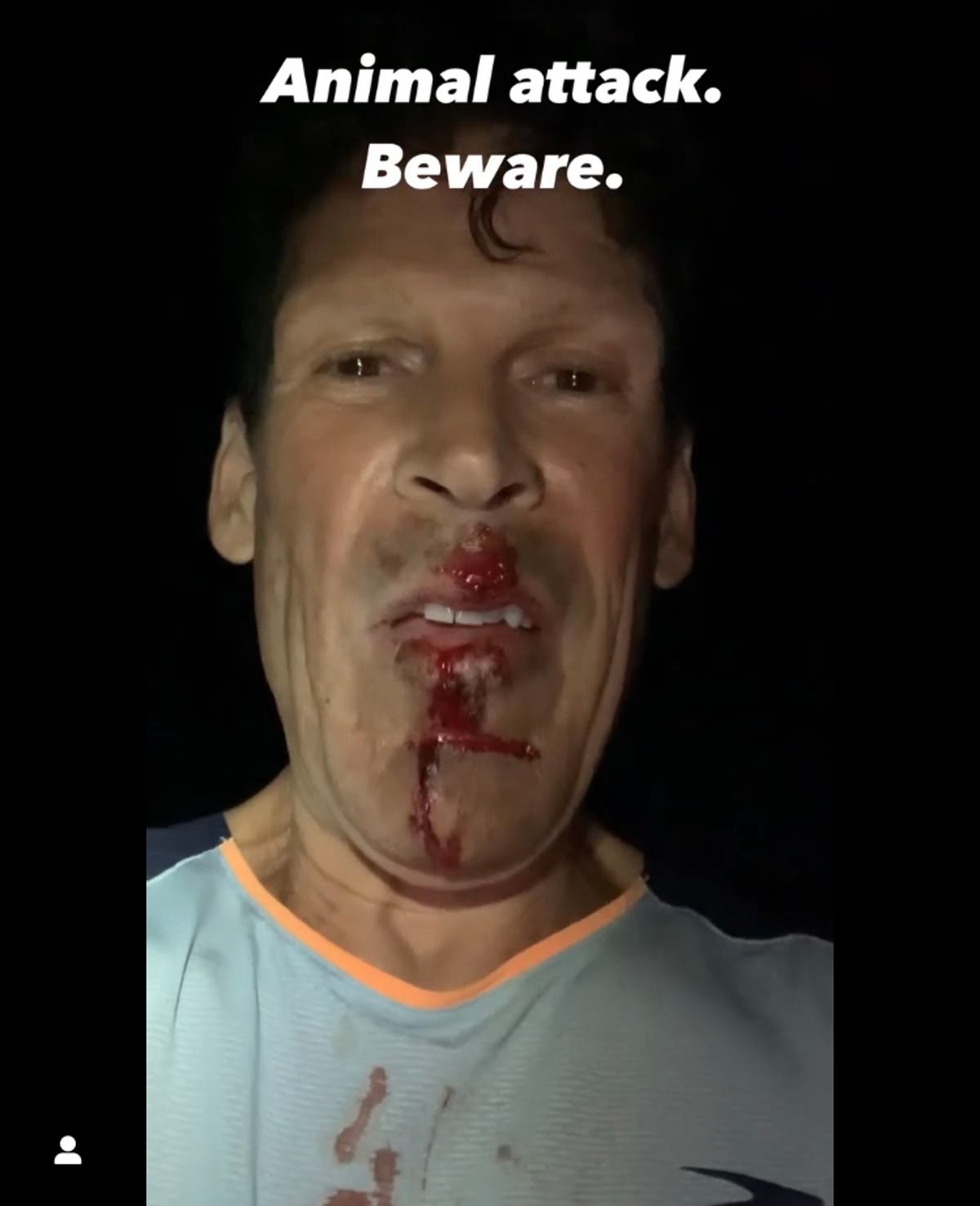 It was 3am last Friday, just north of the Golden Gate Bridge, when runner Dean Karnazes decided to unwrap an energy bar as he powered through his latest 150-mile race – only to feel something furry barrel into him.

“I heard what sounds like a dog coming up behind me,” Mr Karnazes, 59, tells The Independent. “And as I swung around to look, it was a coyote charging to me. And it hit me and knocked me to the ground.”

He sees coyotes all the time in the region, the Marin Headlands, as he runs through the hilly and often foggy terrain. For the uninitiated, he describes them as mid-size-looking dogs with longer snouts.

“I’m very convinced it was trying to take my food,” he says, laughing, almost a week after the incident. He posted a nighttime video on social media soon afterwards showing blood trickling down his face.

“I don’t think the coyote meant to slam into me; I think it was just trying to grab the food, because I was carrying it in my hand as I was running,” Mr Karnazes tells The Independent.

“And [the coyote] either miscalculated or, when I swung around because I heard the footsteps. It just slammed into me,” he says, estimating the animal was around 50 pounds. “So I think it was clearly going from my right hand where the energy bar was being held.”

He says he believes the coyote heard the crinkling of the energy bar wrapper and has come to associate the noise with treats after being either fed by tourists or in such close proximity to so many humans in the area.

“The rangers later told me the area [where it] happened is just notorious for feedings, because it’s kind of near a parking lot where a lot of tourists go,” he says.

The California Department of Fish and Wildlife warns that coyotes are “smart adaptable canines … by nature fearful of humans” that play a useful ecosystem role in controlling rodent populations.

“However, if coyotes are given access to human food and garbage, their behavior changes,” the Department warns on its website. “They lose caution and fear. They may begin to harass domestic livestock and pets. They might threaten human safety.

“They might be killed. Relocating a problem coyote only moves the problem to another neighborhood. Understand how to keep coyotes wild.”

Mr Karnazes, who is an author and speaker in addition to being an ultramarathon runner, echoes that advice and says he’s had countless scary interactions with wildlife over the years.

“I’ve had bear encounters, I’ve had a lot of rattlesnake encounters, I had a camel chase me in the Sahara,” he tells The Independent, adding: “I run all over the world and some countries, you know, there are wild dogs. And it is terrifying.

“But it’s kind of … you know it’s coming. The coyote just shocked me because I’ve run there so many times and never had a problem.”

He adds that he wants to “be clear that coyotes do not eat humans.

“They’re not It’s not like a grizzly bear,” he says. “I think a lot of people that are uninitiated think, ‘Oh, this coyote was trying to eat Dean.’ No,” he laughs. “I mean, I’ve seen hundreds of coyotes in the area I was at; in fact, even earlier in the day, I had seen several coyotes.”

Mr Karnazes describes the animals as “kind of cute, as they are curious … they run away, but they kind of stop and look at you. They don’t run for cover,” he says, adding that they’ll run close enough to humans to “sit there and watch you.”

“Coyotes are found almost everywhere in California, including cities, and authorities have long warned that small children and pets can be at risk, even though attacks are rare,” AP reported after those attacks.

“Last year, Fish and Wildlife began workshops to help communities deal with coyotes because of an increase in the number [of] conflicts with people.”

The conflict with Mr Karzanes left home a bit shaken and bloodied from falling; he wasn’t bitten or clawed by the animal, which was likely just as startled. He dropped out of the race, though, after the sun began coming up and other people on the trail were aghast at the state of him, recommending an ambulance.

When he went home, his dentist wife helped fix up his face and lip. Mr Karzanes has taken it all in his stride, given his history with encountering wildlife on his global adventures.

He does have some advice for anyone around coyotes, however.

“We’ve made these poor animals dependent on us by feeding them,” he tells The Independent. “And it’s just got to stop … My advice to people is: Let wild animals be wild.”