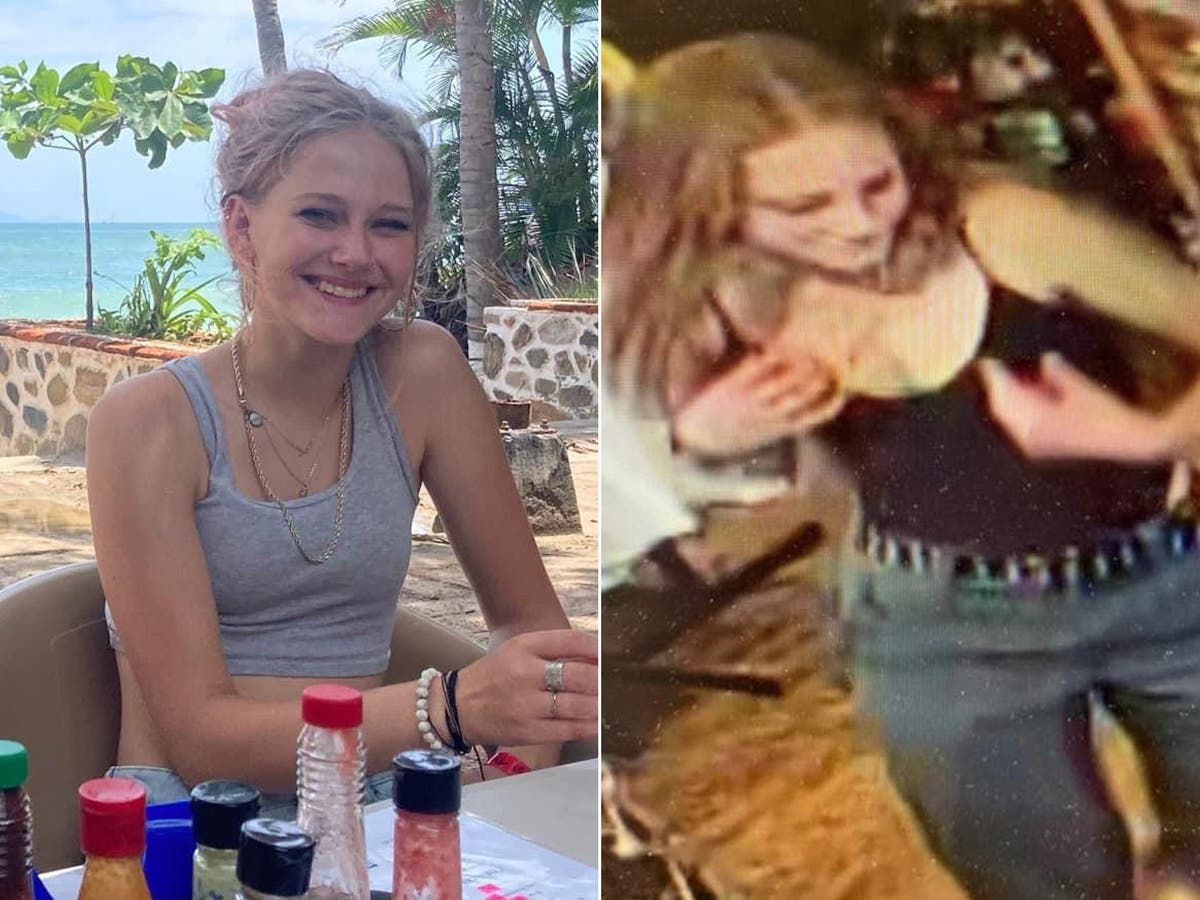 Kiely Rodni’s mother has spoken out after investigators announced that they are scaling back the search to find her missing daughter.

Lindsey Rodni-Nieman told The Independent on Tuesday that she “understands the reasons” behind the search moving into a “more limited” phase but vowed to “never give up hope” that she will find the 16-year-old.

Kiely was last seen at around 12.30am on 6 August at a party – attended by around 200 to 300 teens and young adults – at the Prosser Family Campground in Truckee, California.

Her cellphone last pinged next to Prosser Lake around that time and has not been in service since. Police have released images of two sweatshirts associated with Kiely – the first which she was leant and another which she was spotted on video wearing at the campground party.

Now 13 days on, officials said the case will be transitioning into a more “background, investigative” phase from next week.

Ms Rodni-Nieman urged people to continue to come forward with any information. “There’s no photo that’s too small, no piece of information too mundane,” she said.

Kiely Rodni’s mother Lindsey Rodni-Nieman said that there was “nothing out of the ordinary” with Kiely on the day she vanished without a trace.

Ms Rodni-Nieman told The Independent last week that she last saw Kiely on Friday morning and then spoke to her by text message that night – not long before her last known sighting.

Kiely had come downstairs in their home that morning and mother and daughter chatted about their plans for the day.

“It was ‘morning, hi, love you’ and talking about plans for the day – just a little check-in as normal,” said Ms Rodni-Nieman.

“She was going to see some friends and maybe go to the gym… We also talked about her plans to go camping the following night. And then we said ‘have a great day and love you’.”

She said: “She did not seem out of the ordinary at all.

“Everything seemed the same, she had a big smile on her face and she was ready to greet the day. She was having a good day and week and was excited about going camping the following night. We had a great exchange.”

The mother and daughter stayed in contact throughout the day and last spoke at around 11.30pm that night when Kiely texted to say she would be setting off on the 25-30 minute drive home from the party.

“She said she’d be leaving at 12.15 and was going to start heading home,” said Ms Rodni-Nieman.

That was the last time she heard from her daughter.

Kiely Rodni’s grandfather has said that he thinks her missing car could hold clues as to what has happened to his granddaughter.

The 16-year-old’s silver 2013 Honda CRV has also not been seen since the early hours of 6 August when she vanished without a trace at the campground party.

David Robertson told Fox40 that he believes finding the car could help lead them to Kiely as he urged people to look out for it.

“Keep looking for the car, please,” he said.

RECAP: Everything we know about Kiely’s disappearance

A desperate search continues for 16-year-old Kiely Rodni, who vanished from a party at a northern California campground on 6 August

Kiely was last seen around 12.30am on Saturday (6 August) near the Prosser Family Campground in Truckee, the Placer County Sheriff’s Office said.

She is described as white, 5’7” tall, and 115 pounds with blonde hair and hazel eyes. She has numerous piercings and jewelry, including a nose ring, and was last seen wearing green Dickies pants and a black tank top.

The Independent’s Andrea Blanco has the full story:

Everything we know about 16-year-old Kiely Rodni’s disappearance

Kiely Rodni is described as white, 5’7” tall, and 115 pounds with blonde hair and hazel eyes. She was last seen wearing green Dickies pants and a black tank top

Kiely Rodni was wearing a sweatshirt with the words “odd future” emblazoned across it on the night she vanished without a trace at a campground party, according to police.

Placer County Sheriff’s Office revealed on Sunday that the 16-year-old was spotted in video footage on the evening of 5 August at the Prosser Family Campground in Truckee, California.

In the footage, she is wearing the white hoodie covered in the phrase “odd future” in pink letters.

It is unclear whether Kiely was wearing or in possession of the sweatshirt when she was last seen at around 12.30am the following morning.

However, this is the second sweatshirt the public has been alerted about in connection to the missing teenager after investigators previously revealed that she had borrowed a hoodie with the Lana Del Ray lyrics “you don’t want to be forgotten, you just want to disappear” from someone at the party.

The Independent’s Rachel Sharp has the full story here.

In an image released at a press conference on Monday, the Placer County Sheriff’s Office provided a picture of the 2013 Honda CR-V belonging to Kiely, and which remains missing as well as the 16-year-old.

Sheriff’s have confirmed Kiely’s vehicle has a ram sticker right below the rear wiper blade and a Californian license plate number: 8YUR127.

“As the investigation into Kiely’s disappearance continues, we urge the public to call our tip line immediately if they spot a 2013 Honda CR-V with that same sticker under the rear wiper blade, as we believe it is an identifying attribute of her vehicle,” the sheriff’s office added.

Sam Brown, a Nevada County Sheriff’s captain, suggested on Monday that the search for Kiely Rodni was entering a more “limited” phase and would begin to wind down after more than 9,000 man hours and 10 days of looking for the missing teenager.

Cpt Brown said investigators “are moving into a more limited but continuous search and rescue effort” and that eventually, “we are going to have to switch modes and kind of focus on the investigative end” as the investigation hit the 10 day marker.

“We’ve pulled in a tonne of resources towards that goal and to date we’ve had over 9,000 man hours into searching, which is pretty astronomical,” he explained. “Our biggest problem is where do we go and how do we keep sustaining this?”

The sheriff’s captain added: “We still want all eyes and ears out there. We are coming into hunting season. We’re hoping to have eyes out all over the place and we’re going to continue to put an effort in as a unified command”.

Anybody with information has been asked to come forward.

Placer County Sheriff’s Office spokesperson Angela Musallam confirmed during Monday’s press briefing that two sweatshirts were connected with the investigation into Kiely Rodni, but that investigators had video evidence of her wearing only a white sweatshirt.

“We did received a video showing Kiely wearing the white sweatshirt,” Ms Musallam said to reporters.

Police previously said Kiely had borrowed a sweatshirt with the Lana Del Ray lyrics “you don’t want to be forgotten, you just want to disappear” from someone at the party, as Rachel Sharp reports:

Investigators previously revealed she had borrowed a hoodie with the Lana Del Ray lyrics ‘you don’t want to be forgotten, you just want to disappear’ that night

The last ping from Kiely Rodni’s cellphone has placed the missing teenager at the edge of a lake at the campground where she was last seen more than one week ago.

Captain Sam Brown of the Nevada County Sheriff’s Office revealed at a press conference on Sunday that the last known location from Kiely’s cellphone was at around 12.30am close to Prosser Lake – the constructed reservoir that goes around the Prosser Family Campground.

“Just because it was last pinged there, that doesn’t mean that’s where the phone stopped pinging,” he said.

“The ping for the data points was near the water. It’s hard to tell an exact pinpoint.”

Divers have been searching the lake for any signs of the missing 16-year-old but have recovered nothing to date.

The Independent’s Rachel Sharp has the full story:

Search of the lake is complicated by the water’s depth of around 57 feet and poor visibility, officials admitted

Truckee police to scale back search for missing teen

Investigators are planning to scale back the search for missing teenager Kiely Rodni as 11 days have gone by since she was last seen at a campground party in Truckee, California – and there is still no sign of the 16-year-old or her missing car.

Captain Sam Brown of the Nevada County Sheriff’s Office announced in a press conference on Monday that the search will move to a “limited” phase next week.

“We are moving into a more limited but continuous search and rescue effort, we’ve pulled in a tonne of resources towards that goal and to date we’ve had over 9,000 man hours into searching, which is pretty astronomical,” he said.

“Our biggest problem is where do we go and how do we keep sustaining this. We do have some plans that have continued… but we are going to have to switch modes and kind of focus on the investigative end and try to figure out where we do we go from there?”

Captain Brown said he still wants “all eyes and ears” out looking for Kiely and suggested that hunters should be on the lookout for signs of the missing teen as hunting season gets under way soon.

The Independent’s Rachel Sharp has the full story:

Kiely Rodni: Truckee police to scale back search for missing teen after 11 days

Investigators will ‘put pedal down’ on case for one more week

Placer County Sheriff’s Office Lt Josh Barnhart said that investigators would be “putting the pedal down” for one more week before the case becomes more “taskforce style” next week.

“I’d like to say that we’re putting the pedal down, that we are continuing to work this week, and that after this week we will be modifying things to a taskforce style,” he said.

“That means our resources will continue to move forward, but in somewhat of a different manner.”

Lead investigators from each agency will then move forward as one unified command.

“It doesn’t mean the investigation will stop. It will contninue to move forward,” he said.