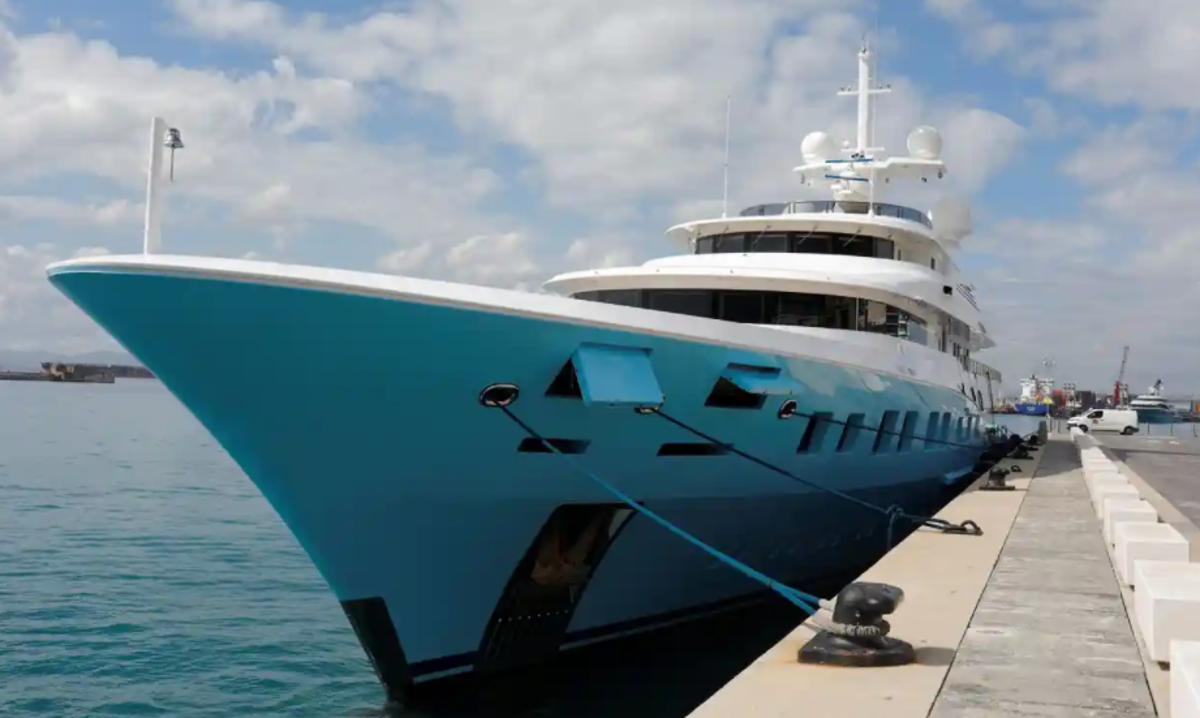 A Russian superyacht seized in Gibraltar after its owner was sanctioned is to be sold off in the first such auction since Vladimir Putin launched his invasion of Ukraine.

The Axioma, reported to be worth £63m, was detained upon docking in Gibraltar in March after its billionaire owner Dmitrievich Pumpyansky was sanctioned by the UK, EU and US in response to the war.

However, despite calls from governments for the proceeds of seized assets to be used to help Ukrainians, a bulk of the money raised from the sale at next week’s auction is expected to go to JP Morgan, which claims Mr Pumpyansky owes the US investment bank some £17m.

Mr Pumpyansky is the owner and chair of steel pipe manufacturer OAO TMK, a supplier to Russian state-owned energy company Gazprom. In March, the 58-year-old was described by the UK’s foreign secretary Liz Truss as among the “major oligarchs” who are “closest to Putin”.

Dozens of people from “across the world” have so far flown to Gibraltar to inspect the yacht, with many “convinced they’re going to get a bargain”, according to the broker leading the auction on Tuesday.

The 236-foot vessel, originally named Red Square and boasting a 3D cinema, infinity pool, spa, and space for 12 guests and a 20-strong crew, was formerly chartered out to the world’s super-wealthy at a cost of up to £465,000 per week.

The Turkey-built yacht is owned by a British Virgin Islands holding company called Pyrene Investments, of which Mr Pumpyansky is a beneficiary, according to the Panama Papers leak.

Refinitiv shipping data showed the Axioma leaving the Caribbean island of Antigua on 27 February and spending three weeks crossing the Atlantic before reaching Gibraltar, where it was detained by the government following a legal claim by JP Morgan, which alleges it is owed £17m by Pyrene Investments.

The bank has argued that the fact that Mr Pumpyansky has been sanctioned means the terms of the loan have been breached, because JP Morgan legally cannot accept loan repayments from the firm, The Guardian reported.

Nigel Hollyer, who is leading the auction on behalf of the Supreme Court of Gibraltar’s Admiralty marshal, told The Independent that, by the time of the auction, his firm Howe Robinson Partners will have arranged 28 inspections of the yacht from prospective buyers.

“I am fairly confident that the number of potential buyers who have not inspected the yacht but will submit an offer could easily be at similar numbers,” he said, adding: “No doubt the majority of bids eventually received will be well below the reserve. In other words, unrealistic buyers who believe this is an opportunity for a real bargain.”

After repayment of the debt to JP Morgan and the cost of detaining the yacht, any surplus funds from its sale will be frozen in an account with the Supreme Court in Gibraltar, Mr Hollyer said.

A JP Morgan spokesperson said the firm “will politely decline to comment on the Axioma” when approached by The Independent and asked whether any proceeds from the yachts sale could be put towards helping Ukrainians.

The company is understood to have donated $10m (£8.45m) to help Ukrainian refugees, while its Warsaw office is in the process of hiring 50 refugees to a training programme while they are displaced.

The firm’s chief executive Jamie Dimon called in April for Washington to take a stronger stance over the war, writing that it was democratic nations must take a stand “against all forms of evil”, and warned the bank’s exposure to Russia could cost it up to $1bn (£763m).

Earlier this month, the bank helped Kyiv secure agreements for a two-year freeze on Ukraine’s payment of almost $20bn of international bonds in order to help the country maintain financial stability and fund its defence effort.