Under the watch of counter-terrorism officers and police in tactical gear, hundreds of people gathered in front of the New York Public Library to show support for .
Irish novelist Colum McCann, British writer Hari Kunzru and others read passages from Rushdie’s works from the top of the flagship library branch’s steps off Manhattan’s Fifth Avenue. Below, at a distance enforced by organisers, a crowd of about 400 people gathered to listen, breaking out into a chant of “Stand with Salman” when the event concluded.
Some held signs depicting Rushdie and quoting him saying, “If we are not confident of our freedom, then we are not free.”
Police say Rushdie was attacked by a 24-year-old New Jersey man who rushed a stage and stabbed the writer in the neck and torso at a literary festival in western New York last week. Rushdie, who was rushed to a hospital, survived.

There were no bag checks or metal detectors to screen for weapons ahead of the appearance by Rushdie, who had been living under a death sentence for 33 years.

The suspect has pleaded not guilty to second-degree attempted murder and assault charges.
“I hope this is a wake-up call that people like Salman, who are fearless, who write things as they see them, who are not afraid to speak the truth as they view it, really are in danger,” said PEN America Chief Executive Suzanne Nossel. The nonprofit free-expression and human rights group helped organise the event.
Attendees spoke of their worries for themselves and other writers following the attack.
“We’re all in danger. And some of us are more overtly in danger than the rest,” Iranian-American author Roya Hakakian said in an interview.

While the death sentence, or fatwa, ordered on Rushdie by Iran was among the most high-profile threats, many authors say harassment and calls for violence have become part of the experience of being a writer. 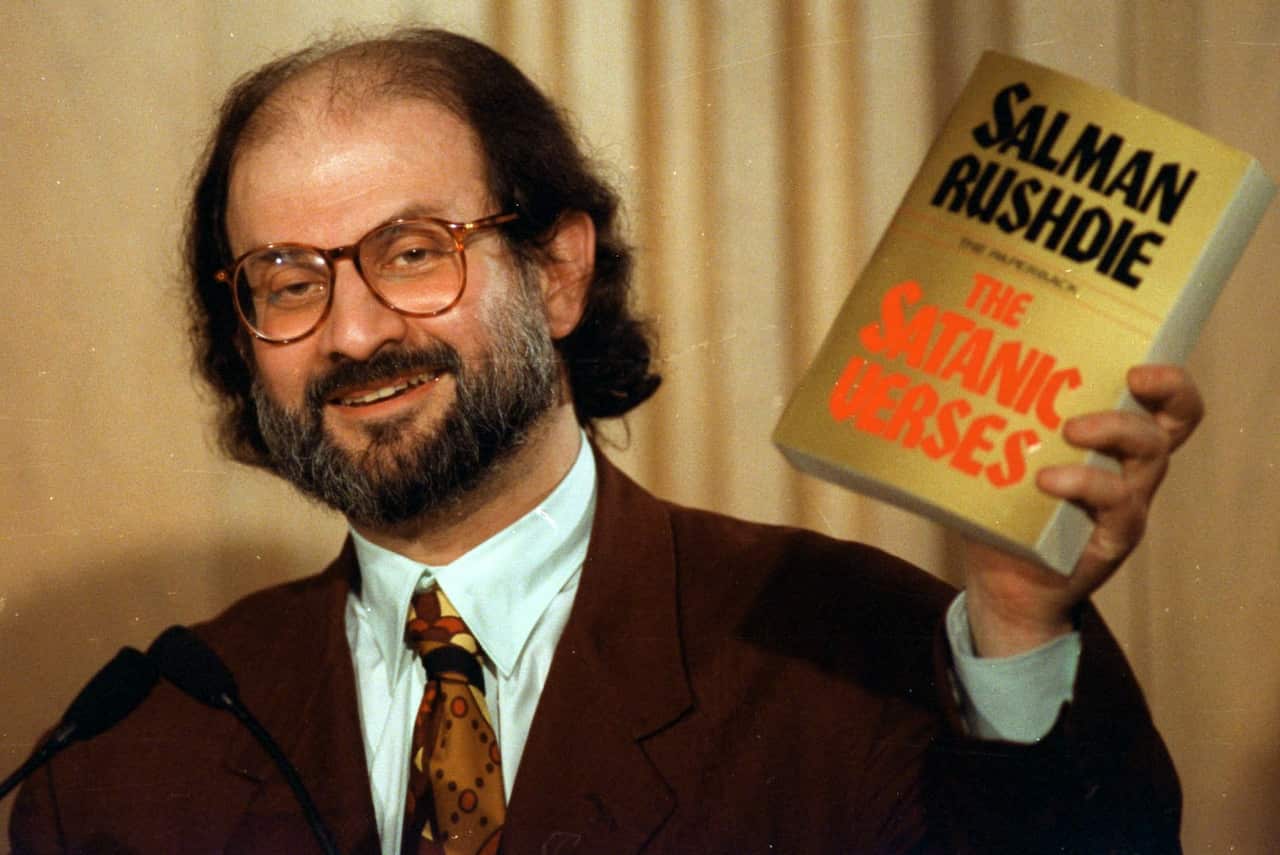 Author Salman Rushdie holds up a copy of his book The Satanic Verses during a 1992 news conference in the US. Source: AP / RON EDMONDS/AP

Love Is an Ex-Country author Randa Jarrar said in an email interview this week that she had to learn how to “better aim a gun” and prepare physically in case of attack after a tweet about former first lady Barbara Bush prompted threats.

When Mrs Bush died in 2018, Jarrar described her as an “amazing racist” for a comment about the majority-Black communities displaced by Hurricane Katrina.
The Muslim author said she feared for her life when critics posted her home address and phone number online. She and her child began receiving death threats.

Every threat she received mentioned that she is Muslim and warned her to go back to where she came from, Ms Jarrar said. She moved, and hired a company to scrub her private data from the internet.

Queer Chicana writer Myriam Gurba faced threats after she criticized author Jeanine Cummins in 2020 of cultural appropriation in writing the novel “American Dirt,” which focused on a Mexican woman who escaped a drug cartel to build a new life in the United States as an undocumented immigrant.
Ms Gurba said many people supported her, but she also received threats of violence on her phone and the internet.
“The first death threat that I received stated that the police should execute me for my stupidity,” she said.
This week, police in Scotland said they were investigating a threat against Harry Potter author JK Rowling following her tweet voicing concern for Rushdie.
At least one upcoming literary festival is tightening security. Organizers of September’s National Book Festival, hosted by the Library of Congress in Washington, had already planned to require bag searches.
Now, the festival is working with law enforcement to add extra measures, a spokesperson said.
At the New York Public Library, some writers said they did not fear gathering in public.

“The only time I got anxious was when they told us how much security there was going to be, thinking maybe there have been some threats, but I doubt it,” author Paul Auster said.