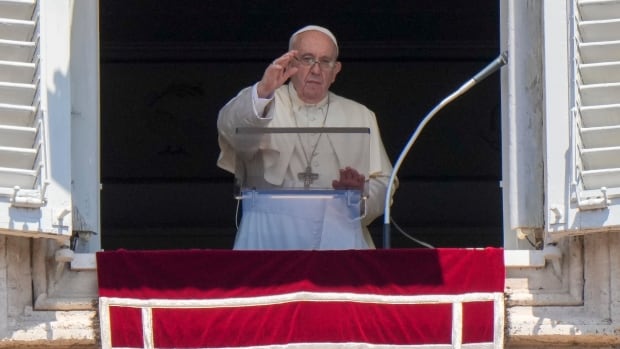 Pope Francis said on Sunday his trip to Canada next week will be a “pilgrimage of penance” that he hopes can help heal the wrongs done to Indigenous people by Roman Catholic priests and nuns who ran abusive residential schools.

Pope Francis will tour three regions — Edmonton, Quebec City and Iqaluit — from July 24 to 29. During the trip, he’s expected to expand on an apology he delivered at the Vatican this past spring for residential school abuse in institutions run by his church.

“Unfortunately in Canada many Christians, including some members of religious orders, contributed to the policies of cultural assimilation that in the past gravely damaged native populations in various ways,” Francis said at his weekly address to people in St. Peter’s Square.

About 150,000 children were taken from their homes. Many were subjected to physical and sexual abuse in what Canada’s Truth and Reconciliation Commission in 2015 called “cultural genocide.”

The stated aim of the schools, which operated between 1831 and 1996, was to assimilate Indigenous children. They were run by Christian denominations on behalf of the government, most by the Catholic Church.

The schools were at the centre of discussions between the Pope and Indigenous people at the Vatican in March and April. Recalling the meetings, Francis said on Sunday he had expressed “my pain and solidarity over the evil that they endured.”

“I am about to make a pilgrimage of penance, which, I hope that with the grace of God can contribute to the path of healing and reconciliation that already has been started,” he said.

He appealed for the faithful to “accompany me with prayers” during the trip.

Seeking more than an apology

Fresh demands for accountability came after what are believed to be more than 200 unmarked graves were discovered in British Columbia last year by the Tk’emlúps te Secwépemc, near the former Kamloops Indian Residential School, which was run by the Roman Catholic Church.

Hundreds more potential unmarked burial sites have been found since in other locations around Canada.

Some survivors and advocates want more than an apology from the Pope. There have been calls for the Catholic Church to release all residential school documents and records to the Winnipeg-based National Centre for Truth and Reconciliation.

WATCH | Mixed feelings from survivors ahead of Pope’s visit to Alberta:

Pope Francis is expected to join survivors at the Ermineskin Indian Residential School in the community of Maskwacis south of Edmonton on July 25.

Some also want Indian day school survivors to have their experiences acknowledged.

While separate from the residential school system, Indian or federal day schools were part of federal policy aimed at assimilating Indigenous children and often had religious affiliations. The Roman Catholic Church operated the majority of the nearly 700 schools.

The Vatican on June 23 confirmed the Canadian visit will go ahead even though Francis is dealing with some health issues.

The 85-year-old Pope had to cancel a trip to Democratic Republic of Congo and South Sudan in early July because of a knee problem that forced him to use first a wheelchair and later a cane.

In an interview with Reuters on July 2, he gave details of his ailment for the first time public, saying he had suffered “a small fracture” in the knee when he took a misstep while a ligament was inflamed.

A national Indian Residential School Crisis Line has been set up to provide support for residential school survivors and others affected. People can access emotional and crisis referral services by calling the 24-hour national crisis line: 1-866-925-4419.

Support is also available for anyone affected by their experience at Indian or federal day schools. Individuals can access immediate mental health counselling and crisis intervention services at the Hope for Wellness helpline by calling 1-855-242-3310 or online at www.hopeforwellness.ca.