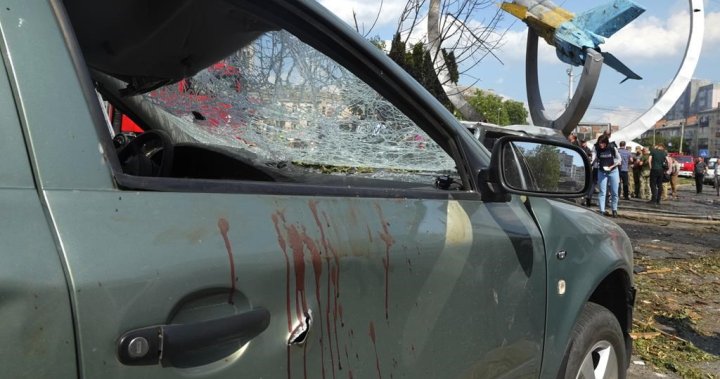 Russia is preparing for the next stage of its offensive in Ukraine, a Ukrainian military official said, after Moscow said its forces would step up military operations in “all operational areas”.

As Western deliveries of long-range arms begin to help Ukraine on the battlefield, Russian rockets and missiles have pounded cities in strikes that Kyiv says have killed dozens in recent days.

Canada’s decision to exempt gas turbines from sanctions right thing to do: Freeland

“It is not only missile strikes from the air and sea,” Vadym Skibitskyi, a spokesman for Ukrainian military intelligence, said late on Saturday. “We can see shelling along the entire line of contact, along the entire front line. There is an active use of tactical aviation and attack helicopters.

“Clearly preparations are now underway for the next stage of the offensive.”

The Ukrainian military said Russia appeared to be regrouping units for an offensive toward Sloviansk, a symbolically important city held by Ukraine in the eastern region of Donetsk.

0:59
‘This is an act of Russian terror’: Zelenskyy says Russian missiles have killed 20 people in western Ukraine

‘This is an act of Russian terror’: Zelenskyy says Russian missiles have killed 20 people in western Ukraine

The British defence ministry said on Sunday that Russia was also reinforcing defences across areas it occupies in southern Ukraine after pressure from Ukrainian forces and pledges from Ukrainian leaders to drive Russia out.

Ukraine says at least 40 people have been killed in Russian shelling of urban areas since Thursday as the war launched by Russian President Vladimir Putin on Feb. 24 intensifies.

Dozens of relatives and local residents attended the funeral of four-year-old Liza Dmytrieva in the central Ukrainian city of Vinnytsia on Sunday. The girl was killed in a missile strike on central Vinnytsia on Thursday that killed 24 people, according to Ukrainian authorities.

To the south, more than 50 Russian Grad rockets pounded the city of Nikopol on the Dnipro River, killing two people who were found in the rubble, Governor Valentyn Reznichenko said.

Ukrainian President Volodymyr Zelenskyy said Russia had used more than 3,000 cruise missiles to date and it was “impossible to count” the number of artillery and other strikes so far.

Meanwhile, Zelenskyy fired the head of Ukraine’s powerful domestic security agency, Ivan Bakanov, and Prosecutor General Iryna Venediktova, who led the effort to prosecute Russian war crimes, saying many of their employees were collaborating with Russia.

Zelenskyy said more than 60 officials from their two agencies were now working against Ukraine in Russian-occupied territories, and 651 treason and collaboration cases had been opened against law enforcement officials.

“Such an array of crimes against the foundations of the national security of the state … pose very serious questions to the relevant leaders,” Zelenskyy said in a Telegram post.

Kyiv and the West say the conflict is an unprovoked attempt to reconquer a country that broke free of Moscow’s rule with the break-up of the Soviet Union in 1991.

Russian Defence Minister Sergei Shoigu ordered military units to intensify operations to prevent Ukrainian strikes on areas held by Russia, according to a statement from the ministry.

His remarks on Saturday appeared to be a direct response to what Kyiv says is a string of successful strikes carried out on 30 Russian logistics and ammunitions hubs, using several multiple launch rocket systems recently supplied by the West.

The strikes are causing havoc with Russian supply lines and have significantly reduced Russia’s offensive capability, according to Ukraine’s defense ministry.

Ukrainian officials say the new U.S.-made High Mobility Artillery Rocket Systems (HIMARS) they began receiving last month allow them to reach targets in Crimea, which was annexed by Russia in 2014, and other areas occupied by Russia.

“Good morning from HIMARS,” Andriy Yermak, chief of staff to Ukraine’s president, wrote on Telegram on Sunday alongside a video showing a large explosion which he said was another destroyed Russian ammunition depot in southern Ukraine.

On Sunday, former Russian President Dmitry Medvedev said the refusal of Ukraine and NATO powers to recognise Moscow’s authority over Crimea represents a “systemic threat” for Russia, which has the headquarters of its Black Sea fleet there.

A spokesperson for the Odesa regional administration, Serhiy Bratchuk, said on Telegram late on Sunday that a “significant number” of Russian warships moved from Crimea to Novorossiyisk, along Russia’s Black Sea Coast.

Russian-backed separatists have said HIMARS rockets killed two civilians and damaged a bus depot and several other buildings in Alchevsk, east of Solviansk. Ukraine’s armed forces said they struck the bus depot because they had the information it was being used to house Russian troops.

The Russian defence ministry said its forces had destroyed a launch ramp and reloading vehicle for one of the HIMARS systems deployed near the eastern city of Pokrovsk.

The head of Pokrovsk regional police, Ruslan Osypenko, said a residential area had been shelled by Russia with multiple rocket launchers and there were dead and wounded. It released video of damaged homes and residents describing the attack.