Russian journalist Marina Ovsyannikova, who staged a protest against the invasion of Ukraine on live state television in March, was briefly detained in Moscow on Sunday, posts on her social media channels showed.
“Marina has been detained,” a post on her Telegram channel said, beneath images of two police officers leading her towards a white van.
Shortly after, Ms Ovsyannikova posted images of herself and two dogs on her Facebook page.
“Went for a walk with the dogs, just stepped outside the gate, people in uniform approached me,” she wrote. “Now I’m sitting in Krasnoselsky ministry of internal affairs,” referring to a police station in a Moscow district.
Three hours later, Ms Ovsyannikova said she had been released.

“I’m home. Everything is okay,” she wrote on her Facebook page. “But now I know it’s always best to bring a suitcase and passport if you go out.”

Her brief detention on Sunday followed 15 July social media posts in which she is seen with a poster calling Russian President Vladimir Putin a murderer and his soldiers fascists.

“How many more children must die before you will stop?” the poster read.

In March Ms Ovsyannikova, an editor at Channel One television, barged onto the set of its flagship Vremya (Time) evening news programme, .
On Friday, she posted photos of herself on Telegram showing her near the Kremlin and carrying a protest placard raising the deaths of children and denouncing Putin as a “killer”.
Declarations of this kind expose her to criminal prosecution for publishing “false information” about and “denigrating” the army, offences that can carry heavy prison sentences.

Mr Ovsyannikova became internationally famous overnight in March when she staged her live television protest. Pictures of her interrupting the broadcast went around the world. 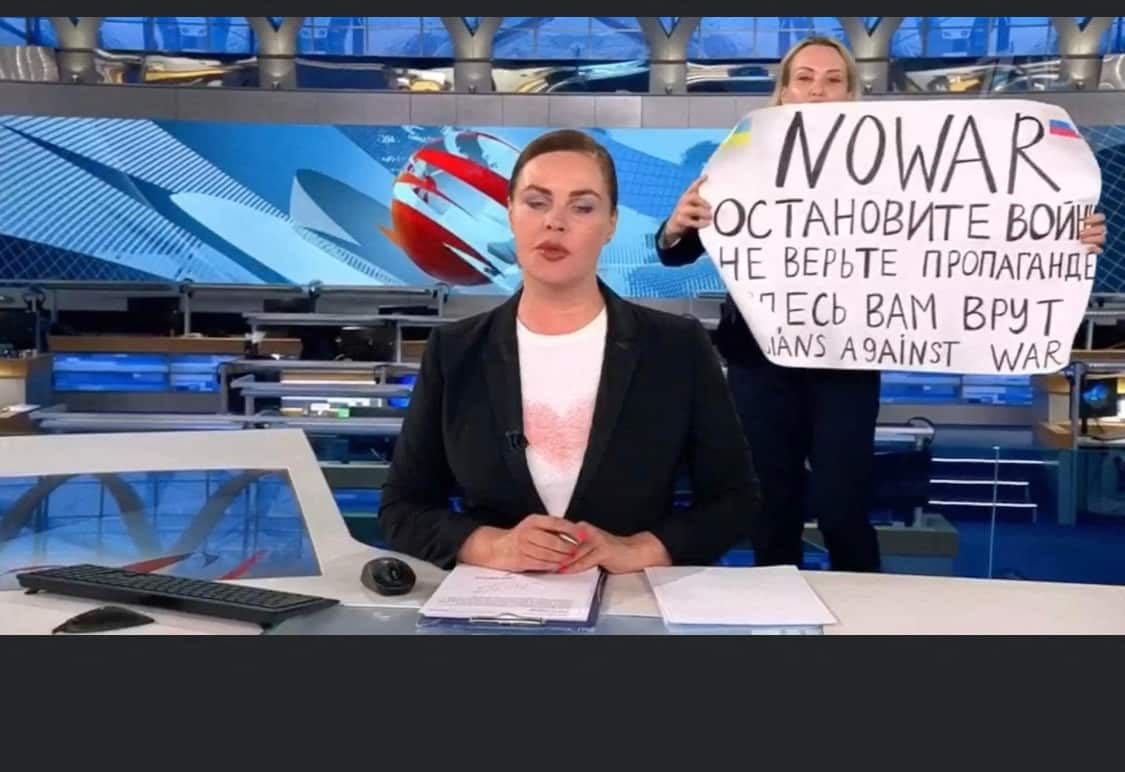 Journalist Marina Ovsyannikova denounced Russia’s invasion of Ukraine in March this year when she interrupted a live television broadcast holding a sign that said “Stop the war. Don’t believe the propaganda. Here they are lying to you”. Source: AAP / Stella Pictures/ABACA/PA

She was briefly detained and then released with a fine, but while a number of international observers praised her protest, it was not universally acclaimed by Russia’s opposition.

Some critics said that she had spent years working for a channel, Pervy Kanal, which they said was effectively a mouthpiece for the Kremlin.
In the months following her March protest, Ms Ovsyannikova spent some time abroad, including a brief period working for the German newspaper Die Welt.

In early July, she announced that she was returning to Russia to settle a dispute over the custody of her children.