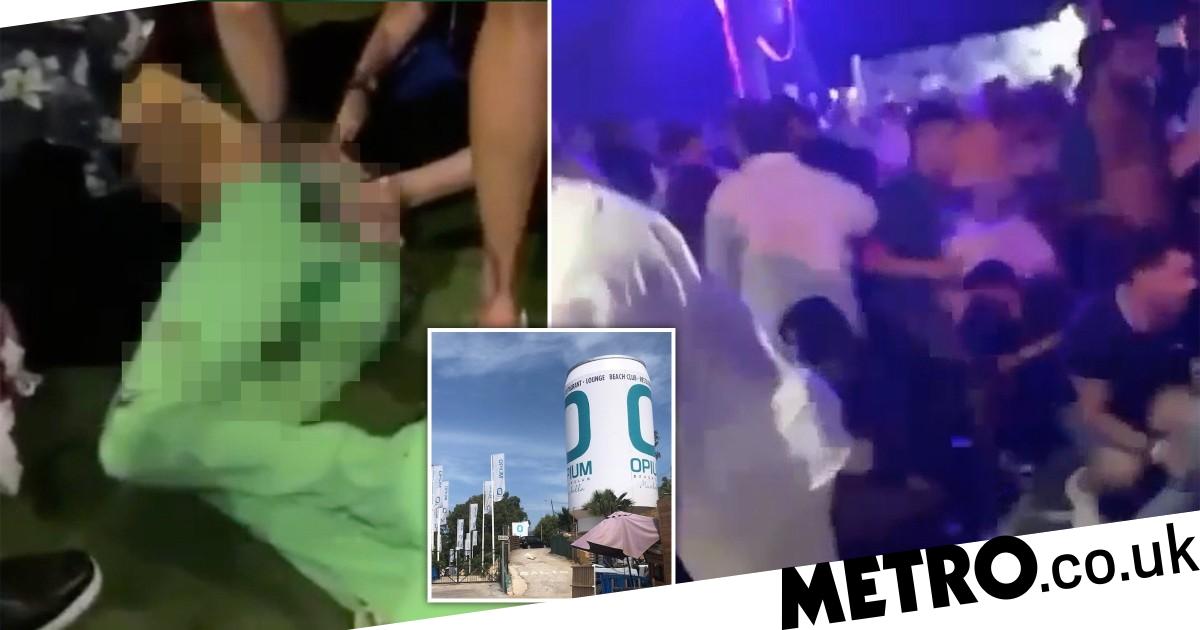 Four people have been shot after a gunman opened fire in a packed nightclub in Marbella, officials say.

Footage shows dancers stampeding towards the exit after shots rang out over the music at Opium, a waterfront venue in the upmarket Spanish resort, while some took cover under tables and chairs.

A group of clubbers could be seen attempting first aid on a wounded woman as blood ran down her outfit.

Police were called at 1.10am on Monday and arrested a suspect, who had been stabbed in the head and chest.

According to local media, a fight had broken out between revellers which ended when one of them pulled out a gun and started shooting.

A resident who witnessed the scene from his home told El Confidencial: ‘I couldn’t sleep because of the noise from the cub and suddenly I heard four shots.

‘I looked out because from the beginning I knew that these were not fireworks like the ones that had been launched on other nights.’

The man, who called emergency services after seeing people fleeing into the street, said it was not the first violent incident in the venue.

The suspect and one of the gunshot victims were said to remain in critical condition later on Monday morning.

The club, which overlooks the sea just outside the town centre, is popular with tourists and fills out on most nights of the week in summertime.

Local authorities did not immediately confirm the nationalities of the victims or suspect.

The beach club boasts on its website: ‘We are permanently seeking to bring out joy, energy, and authenticity to help create the best summer memories.’

A spokesperson for Spain’s National Police said: ‘With regards to the shooting incident at Opium in Marbella we can confirm that five people were injured.

‘Four have suffered gunshot wounds, one of whom is in a serious condition.

‘A person who is the suspected gunman has suffered stab wounds to the chest and head.

‘He has been arrested and is under police custody.

‘The police investigation is ongoing.’