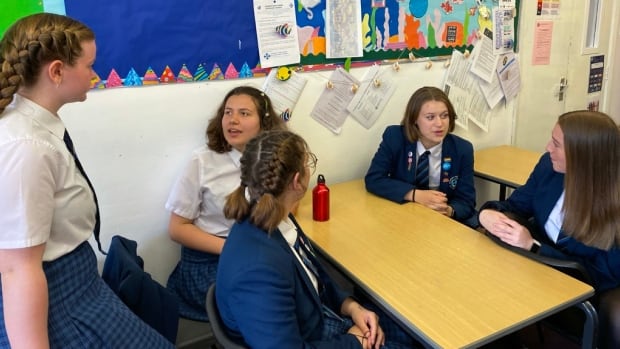 It was Friday lunchtime at a high school in Sandbach, England, and the conversation among a group of students was bleak: teenage girls talking about their experiences of being sexually harassed on their way to school.

“I remember we were on a public bus. And the bus driver told us it was OK to take our tights off if we wanted to. He said he preferred it when we wore the old uniform at school and our skirts were shorter. I was 11,” said Alice, now a Grade 11 student.

“When I was walking home once in my school uniform, I had a man in his thirties get close to me and say that he was going to rape me as he walked past. It was just horrific,” said Hannah, also in Grade 11.

Hannah and Alice — whose names have been changed and ages left out at the request of their school — are part of the feminism group at Sandbach High School, located south of Manchester.

The group is petitioning the U.K. government to ban school uniforms from being sold in costume and sex shops and worn in pornography.

“When we were walking to and from school, on public transport, and we were in our school uniforms, we’d been catcalled, sexually harassed, honked at,” said Alice. “And we kind of wondered why, and why people feel so entitled to, like, sexually harass schoolchildren and make us feel so uncomfortable.”

The group’s petition has now gained more than 13,400 signatures, meaning it has surpassed the requirement to receive a government response. But amid the chaos of Prime Minister Boris Johnson’s resignation and a total reshuffle of the Conservative Party, no response has come within the usual 14 days.

They have also written to members of Parliament, but so far have only received the public support of the school’s local councillor, James Barber.

The feminism group was set up by teacher Sarah Maile in 2012. Each year, Maile encourages her students to select a women’s rights issue to focus on, ranging from human trafficking to female genital mutilation. But this year the group’s focus is particularly close to home.

“I’ve experienced people coming over to me and asking me explicit questions about virginity, and when I’ve said, ‘No,’ they’ve called me a bitch,” said Emma, a Grade 9 student at Sandbach.

Harassment declines when they age out of uniform: students

A 2018 online survey of by campaign group Plan International U.K. of more than 1,000 14- to 21-year-old girls and women suggested that more than one-third of girls have been sexually harassed in public while wearing school uniform.

The vast majority of schools in the United Kingdom require students to wear a uniform up to age 16.

As an older student, Hannah no longer wears a uniform and says she has seen a “decrease in harassment” since she started wearing her own clothes to school.

Hannah’s experience is echoed in research by Plan International U.K. that found “girls felt that being in school uniform made them a particular target.”

Kate Stephenson, a researcher and author of A Cultural History of School Uniform, says uniforms have been around in Britain since the 16th century for reasons ranging from providing orphans with warm clothes to distinguishing status at public schools like Eton College.

Modern uniforms have been around since the 19th century and are intended to give students from different backgrounds a sense of equality.

“It’s about making sure everybody looks the same and sort of removing those items that indicate that some children have more money than others,” Stephenson said.

The campaigners from Sandbach High School say they have been repeatedly asked whether removing uniforms from schools altogether might improve the situation. The students say that line of thinking is victim-blaming.

“I think it’s really worth mentioning that we are children, and we’re telling you that we feel unsafe and we feel uncomfortable because we’re so actively sexualized through these uniforms,” said Alice.

Maile adds that the intent behind targeting sex shops is not to tell consenting adults what they can and cannot do in the bedroom, but to highlight the inappropriate way the costumes are marketed.

“It’s the very specific language that is applied to these costumes, ‘sexy schoolgirl lingerie’ — like, the very fact that that is the description of the product,” Maile said.

But Keith Miller, from London sex shop Love-Init, doesn’t believe that responsibility for the harassment lies with sex shops or their clientele.

“I think that comes down to an individual,” Miller said. “I don’t think stopping these being sold in shops is going to stop the comments. If somebody wants to talk to a school girl in that way, they’re gonna do it.”

According to Stephenson, the culture of sexualizing school uniforms began with the St Trinian’s comic strips in the 1940s and ’50s. Cartoonist Ronald Searle drew the older students in a “raunchier school uniform,” she said, and those characters used their sexuality to their advantage.

“Looking back at it now, sort of 70 years later, we can see problems with it,” said Stephenson. “But at the time, it was rewriting femininity; it was producing new role models.”

Stephenson believes that nowadays, adults typically wear school uniforms as costumes as a way to relive an awkward phase in their life and replace bad memories with positive ones.

‘It absolutely is sexualizing adolescents’

Most adults view the sex-shop uniforms as totally different from the real ones worn by students, she said.

“I think, if you talk to most people, they would be horrified by the idea that it was sexualizing [the] actual school uniform,” said Stephenson. “The problem is that, particularly with things like pornography, it absolutely is sexualizing adolescents.”

The students’ campaign comes amid numerous calls from advocacy groups to make street harassment a crime in the U.K.

One of these groups, Our Streets Now, was set up as a result of harassment experienced by one of its co-founders, Gemma Tutton. She was 14 when she and her sister Maya created the group; Gemma had been publicly sexually harassed since she was in primary school.

While British Home Secretary Priti Patel initially seemed on board with passing a new law in 2021, the government’s independent adviser on the issue, Nimco Ali, has since suggested her attempts to get the law passed had received “pushback” and hinted Johnson had not fully supported it.

The campaigners from Sandbach High School say even if the school uniform ban isn’t passed, they are pleased to have sparked a conversation about the sexualization of children.

“When we’re wearing [a uniform], we are just trying to access education — and that is our fundamental human right,” said Hannah. “So to be abused whilst doing that is horrific.”