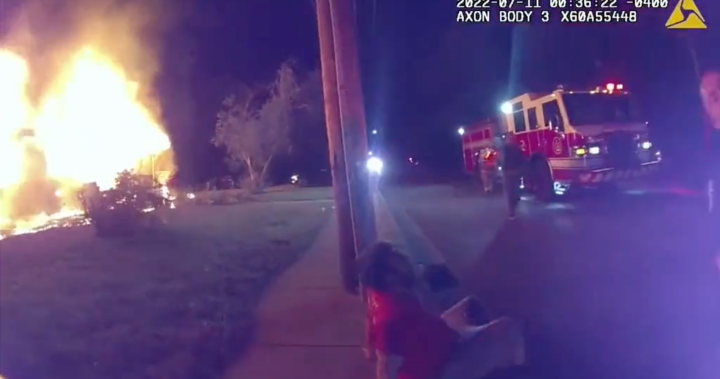 When emergency workers responded to a call about a fire in Lafayette, Ind., last week, they witnessed a house engulfed in flames and a man leaping out of a window with a child in his arms.

The man was later identified as Nicholas Bostic, 25, a local pizza delivery man who is now being hailed as a hero for rescuing two children and three teenagers from the burning house.

Bostic was seriously injured during the rescue and had to be flown to nearby Indianapolis for treatment of severe smoke inhalation and a large gash on his right arm, according to a press release from the Lafayette Police Department.

A few days after his ordeal, Bostic had recovered enough to recount his story to police.

After 2 years in a coma, U.S. woman wakes, names brother as attacker

On the night of July 11, Bostic was driving in Lafayette when he passed a house on fire at around 12:30 a.m. He didn’t have a phone to call 911 and knew time was of the essence if anyone was trapped inside.

Police say he threw his car into reverse and immediately headed to the house, not wanting to waste time finding someone to call for help.

Bostic was able to enter the burning house through the backdoor and called out to its occupants to no reply.

He “contemplated the possibility that everyone had already evacuated,” the police statement reads. “Not taking the chance that someone could still be inside, he decided to go in.”

Upstairs, Bostic found a one-year-old baby and three teenagers, aged 13 to 18, who had been roused by his yells.

“For a minute I didn’t understand it, but my sister ran upstairs with the baby in her hands and yelling at us to get up because there’s a fire,” 13-year-old Shaylee Barrett told the Purdue Exponent. “And for a minute I froze and I laid there because I was confused. That’s when we went downstairs and Nick was downstairs helping us.”

Bostic helped the four youths escape but once they were outside he learned that there was still a six-year-old trapped inside.

“Without hesitation, he ran back into the burning house,” police said.

Bostic described the ground floor of the house as being a “black lagoon” of smoke, according to police, and had to crawl on the floor, feeling with his hands to get around the house.

He told police he had an “inner dialogue” with himself about whether getting the last child out was possible but was determined not to quit, though the house felt like “walking into an oven.”

In an interview with Dave Bangert that was published to the journalist’s Substack, Bostic said, “I don’t know how to explain it, but it was like I accepted I was going to probably die, right there, that night.”

“But it was a weird calm. You just got to work as fast as you can,” he added.

Bostic heard the cries of a child in the blackness and used her voice to guide him. Once he had her, though, he wasn’t able to locate the backdoor in the smoke-filled room.

He ran back up the stairs where the smoke wasn’t as thick and “broke open a window by punching it with his bare hand,” police wrote.

Bostic jumped out of the second-storey window carrying the six-year-old, and landed on his side to cushion their fall.

Police body camera video from the scene shows Bostic running towards emergency crews with the child in his arms before handing her to an officer and dropping to the ground. Panting, he exclaims, “I need oxygen!”

Bostic has since been released from hospital as a hero, having rescued all the occupants of the house without serious injury.

The Lafayette Fire Department believes the house fire started from a bucket of ashes on the porch that wasn’t fully extinguished, according to the Lafayette Journal & Courier.

The parents of four of the five rescued youths — one of the teenagers was sleeping over — were out for a date night when the fire started and returned home to find their house engulfed in flames and surrounded by emergency vehicles.

David and Tiera Barrett expressed their gratitude to Bostic in an interview with the Exponent.

“I literally told him he’s now part of our family,” David Barrett said. “And he was all on board with it. Once we get settled someplace, we’re going to invite him over and his girlfriend for dinner.”

1:53
Community of Varsity on edge after two suspicious house fires in less than three weeks