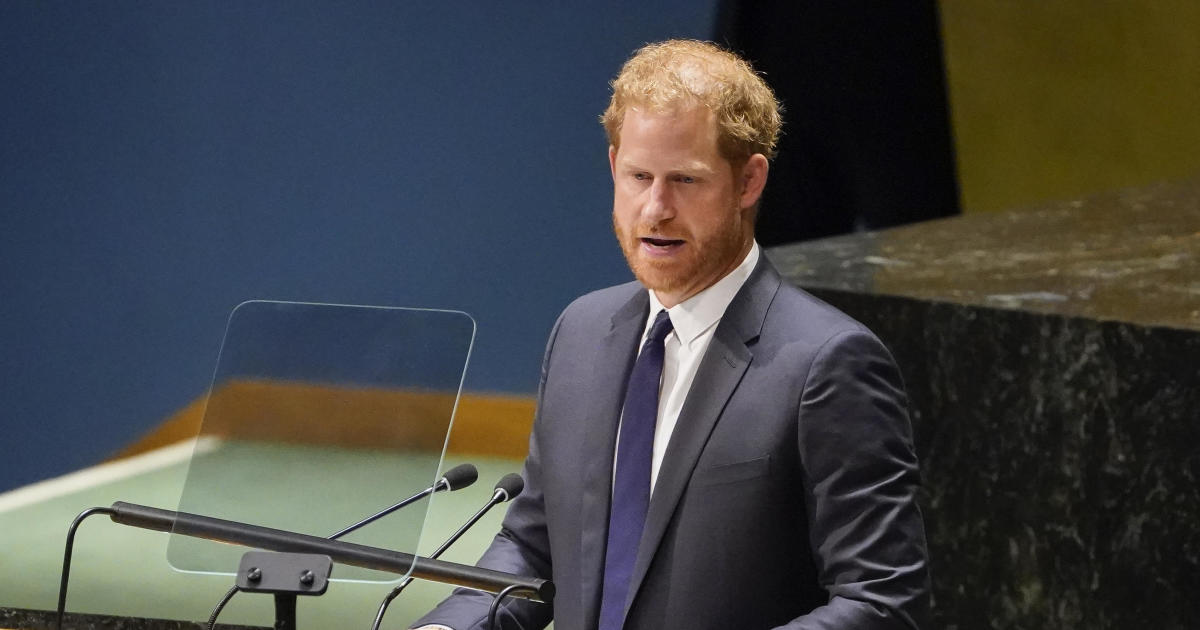 Harry lauded the legacy of the South African crusader for democracy, who became his country’s first Black president after languishing for 27 years in prison for his efforts to dismantle the racist apartheid regime. The U.N. has made July 18 — the late leader’s birthday — an international day to honor his memory and his remarkable battle for freedom and equality.

“We’re living through a pandemic that continues to ravage communities in every corner of the globe; climate change wreaking havoc on our planet, with the most vulnerable suffering most of all; the few weaponizing lies and disinformation at the expense of the many, and from the horrific war in Ukraine to the rolling back of constitutional rights here in the United States, we are witnessing a global assault on democracy and freedom, the cores of Mandela’s life,” Harry said.

The late Princess Diana, Harry’s mother, met Mandela in 1997, not long before she died in a car crash in Paris. Harry and Meghan toured South Africa in 2019, when they were still carrying out official royal duties, and met Graça Machel, Mandela’s widow.

Harry and Meghan gave up their duties, and some privileges, as “working members” of Britain’s royal family in 2020 and migrated to Southern California.

Monday’s keynote speech delivery was an increasingly rare appearance on the world stage for Harry. He referenced his mother’s efforts to address the ugly legacy of racial separatism and spoke also at length on climate change and combatting hunger around the world.

“As we sit here today, our world is on fire, again,” Harry said as wildfires flare across southern Europe and his home nation bakes in record-setting heat. “These historic weather events are no longer historic, they are part of our daily lives, and this crisis will only grow worse unless our leaders lead; unless the countries represented by the seats in this hallowed hall make the decisions – the daring, transformative decisions that our world needs to save humanity. These decisions may not fit with the agendas of every political party, they may invite resistance from powerful interests. But the right thing to do is not up for debate, and neither is the science. The only question is whether we’ll be brave enough and wise enough to do what is necessary.”

That, Harry said, is what Nelson Mandela did: He took action.

“In their strength and in their deeds, Mandela’s legacy shines as brightly as ever. They are my lifeboat. I hope they can be yours, too,” said the royal. “It’s more important than ever that we seek a purpose greater than ourselves, and get to work.”

The U.N. Mission of South Africa said the two-hour event on Monday was about Mandela’s legacy and also racial intolerance, the growing divide between rich and poor and hunger and food insecurity.

“Our world today is marred by war; overwhelmed by emergencies; blighted by racism, discrimination, poverty and inequalities; and threated by climate disasters,” U.N. Secretary-General Antonio Guterres said in his speech.

He declared Mandela “a giant of our time” and a “moral compass” for the path forward.

“On Nelson Mandela’s birthday, the United States joins the international community in honoring the enduring legacy and inspiration of a dedicated peacemaker, human rights advocate, and defender of democracy,” U.S. Ambassador to the U.N. Linda Thomas-Greenfield said in a statement. “Let us honor his life by recognizing that all of us, no matter who or where we are, have the responsibility and power to make a difference in our communities and to build a better world for everyone.”

Pamela Falk is the CBS News correspondent covering the United Nations, and an international lawyer.