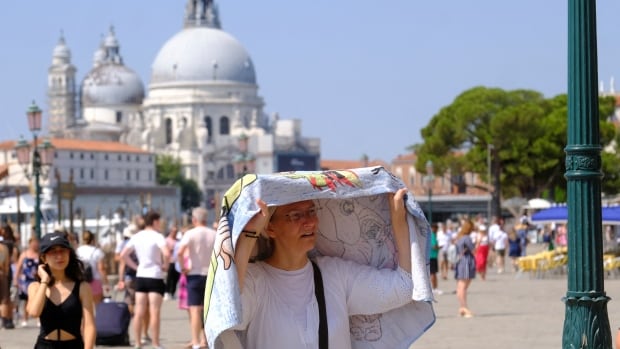 It sounds like a broken record: as the Earth continues to heat up due to man-made climate change, “hottest temperature on record” has become an increasingly common refrain.

Meteorologists think the U.K. and France may have their hottest days ever this week, as yet more temperature records are set to fall. Dozens of countries have hit their high-temperature marks in the 21st century.

Experts warn that climate change has increased the frequency of extreme weather events, with studies showing that the likelihood of temperatures in the U.K. reaching 40 C is now 10 times higher than in the pre-industrial era.

Here’s a round-up of some of the weather records that have fallen in Canada and around the world — just during the 2020s.

Let’s start big. The last seven years are the hottest on Earth “by a clear margin” in records dating back to 1850, EU’s Copernicus Climate Change Service said early this year.

According to an April report by the UN’s Intergovernmental Panel on Climate Change, temperatures on Earth will shoot past a key danger point unless greenhouse gas emissions fall faster than countries have committed.

The report’s authors said they had “high confidence” that unless countries step up their efforts to cut greenhouse gas emissions, the planet will be, on average, 2.4 C to 3.5 C warmer by the end of the century — a level experts say is sure to cause severe impacts for much of the world’s population.

Just a day before Lytton, B.C., was razed to the ground by a wildfire that killed two people, the village set a new Canadian heat record of 49.6 C.

Lytton, about 100 kilometres northeast of Vancouver, actually broke heat records on three consecutive days. Before that week, the highest temperature ever recorded in Canada was 45 C in Saskatchewan in 1937.

Modelling and analysis by researchers at universities in the United Kingdom said that last year’s heat wave across western North America was the sixth hottest ever globally.

The world is on track to blow past a critical climate threshold unless significant efforts are made to curb emissions and reduce reliance on fossil fuels, the latest UN climate change report warns. In the 2015 Paris climate accord, countries had agreed to limit global warming to 1.5 C.

The UN weather agency certified a 38 C reading in the Russian town of Verkhoyansk on June 20, 2020, as the highest temperature ever recorded in the Arctic.

The World Meteorological Organization said the temperature “more befitting the Mediterranean than the Arctic” was registered during a heat wave that swept across Siberia and stretched north of the Arctic Circle.

Verkhoyansk is usually known for its extreme cold, with temperatures dropping below –60 C.

The fallout of higher temperatures

Of course, rising temperatures affect more than just the thermometer. Here are some other, non-temperature records that have been broken recently amid the changing climate.

The world’s oceans grew to their warmest and most acidic levels on record in 2021, the World Meteorological Organization said in its annual State of the Global Climate report. It also said melting ice sheets had helped push sea levels to new heights.

Wildfires that forced evacuations of a number of remote northwestern Ontario First Nations burned more hectares of land in the province in 2021 than in any other year in history, surpassing the record set 26 years ago.

The 2020 hurricane season was the most active on record, with 30 tropical storms.

Though the high number may have had more to do with La Nina than climate change, experts say the hurricanes that form are bigger, stronger and last longer due to warming ocean temperatures.