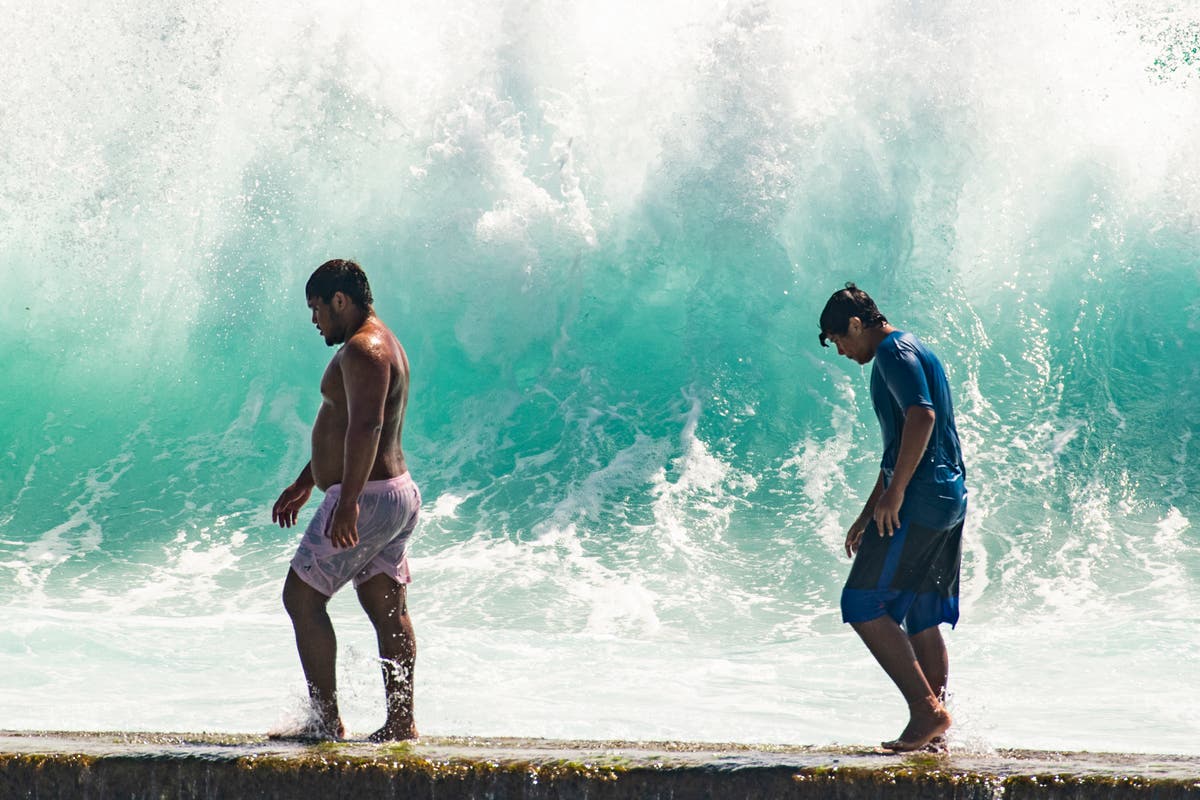 Towering waves on Hawaii’s south shores crashed into homes and businesses, spilled across highways and upended weddings over the weekend.

The large waves — some more than 20 feet (6 meters) high — came from a combination of a southern swell that peaked Saturday evening, unusually high tides and rising sea levels from climate change, the National Weather Service said.

A wedding Saturday evening in Kailua-Kona was interrupted when a few particularly large waves swamped the event, sending tables and chairs crashing toward guests.

Sara Ackerman, an author who grew up in Hawaii and attended the wedding, filmed the waves as they barreled ashore.

“It just was huge,” she said. ”I was filming it and then it just came over the wall and just completely annihilated all the tables and chairs.”

She said it happened about five minutes before the ceremony was scheduled to begin.

“It wasn’t like a life-threatening situation by any means whatsoever,” she said. “It was just like, ‘Oh my gosh … what are we going to do? Where are we going to put the tables?’”

She said they went ahead with the ceremony and cleaned up the mess after the newlyweds exchanged vows.

“We had the ceremony and it was beautiful, having all the (sea) spray,” she said. “The ocean was really wild. So it was great for the photos.”

Chris Brenchley, the meteorologist in charge at the National Weather Service office in Honolulu, called the swell historic: “It’s the largest it’s been in several decades.”

He said the waves were a product of “an interesting convergence of events.”

Remnants of Tropical Cyclone Darby passed south of Hawaii but had no impact on the surf, he said.

Brenchley said the swell was produced in the South Pacific, where it’s currently the winter season.

“They had a particularly strong winter storm where the the winds were focused directly towards places like Samoa and then further on to the north into Hawaii,” he said.

While singular events like this hard to pin directly to climate change, Brenchley said the warming planet is playing a role.

“The most direct type of impact that we can use with climate change is the sea level rise. Any time you add just even small amounts of water, you raise that sea level just a little bit,” he said. “And now those impacts will be exacerbated whenever we have a large storm event or a high, high, high tide. Everything just sort of adds adds a little bit more.”

The weekend waves had faces in excess of 20 feet high, Brenchley said. Most large swells that come from the south are typically no bigger than about 10 feet, which would trigger a high surf advisory.

Lifeguards across the state had a busy weekend.

They conducted at least 1,960 rescues on the island of Oahu alone on Saturday and Sunday.

Officials reported one serious injury when a surfer suffered a laceration to the back of his head.

“Other than that, fortunately, it was a very safe weekend,” said Honolulu Emergency Management Services Department spokesperson Shayne Enright.