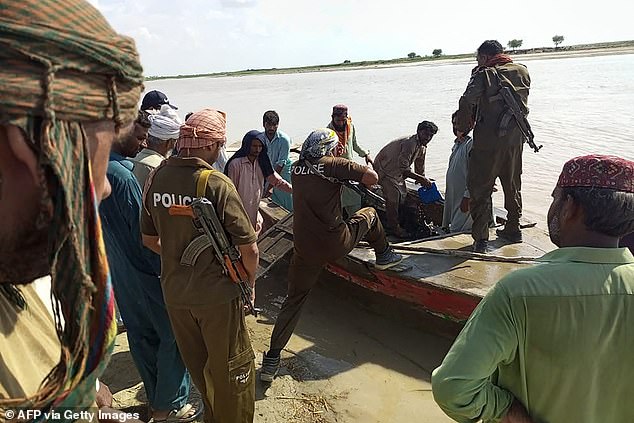 By Chris Jewers For Mailonline

At least 20 people drowned and another 30 were missing on Monday after a boat capsized in a river in central Pakistan, officials said.

Most of those dead and missing are women and children, local reports said. The boat was carrying more than 100 people when it capsized.

The overloaded boat was crossing the Indus river to a wedding in the district of Sadiqabad. Nearly 90 people were rescued by divers.

Policemen and local villagers prepare to search for the victims drowned at Indus River after an overcrowded boat carrying a Pakistan wedding party capsized on the outskirt of Sadiqabad town on July 18, 2022

All those on board belonged to a single family, who were part of a procession on their way to the wedding across the river. The boat was ferrying the family between the villages of Machka and Kharor.

‘We have retrieved 20 bodies so far’ and most of them were women, local government official Aslam Tasleem told local Geo News TV.

He said around 30 additional people were missing.

‘We’re not sure how many people exactly were on the boat. We’re getting the estimates just on the basis of the family members’ accounts,’ he said.

Nearly 35 divers from a state-run rescue service took part in an operation to find and save more people who were in the river, the statement said. 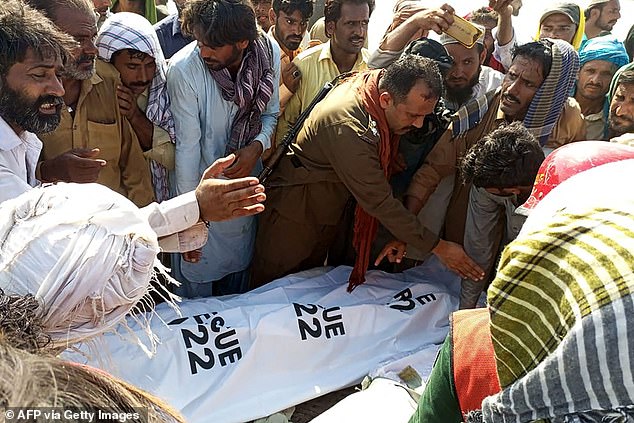 The overloaded boat was heading to a wedding when it capsized in the Indus river in the district of Sadiqabad, the government said in a statement. Pictured: Rescue workers and local villagers gather around the bodies of drowned victims, July 18 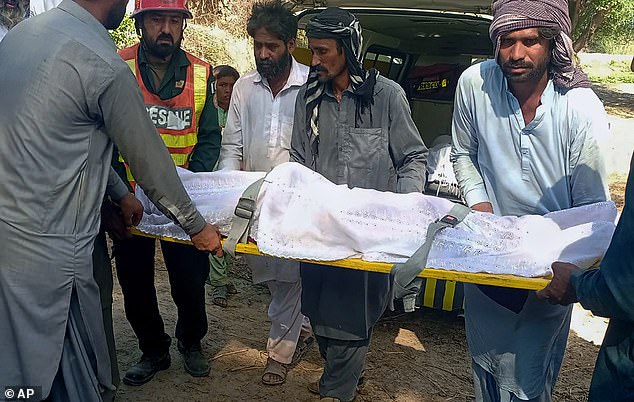 A rescue worker and villagers carry the body of a victim of a boat accident on the Indus River, in Sadiqabad district, July 18

Police officer Mohammad Hammad said ‘most of the drowned appear to be women’ because ‘most of the men knew how to swim’. ‘The death toll may increase,’ he said.

Saleem Assi, a senior government official, said the bridegroom was among those who were rescued. It was not clear if the bride survived.

Assi said the cause of the accident was not immediately known, but apparently the boat was overcrowded. He confirmed all those whose bodies were recovered by the rescuers were women and children. 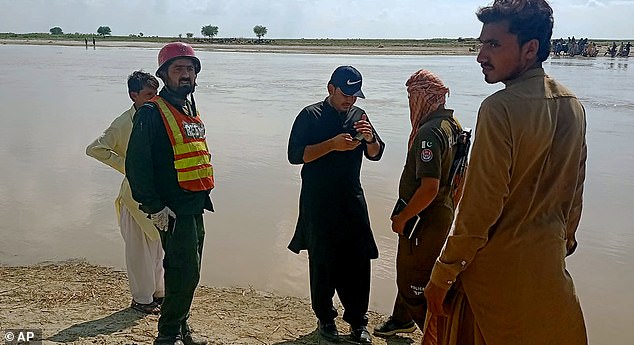 Officials coordinate an operation to recover bodies from the Indus River, July 18

In a statement, Prime Minister Shahbaz Sharif expressed his grief and sorrow over the incident and asked authorities to make their best efforts to rescue those passengers who are still missing.

Such accidents are common in Pakistan, where rickety wooden boats are often used to transport goods and people on rivers and lakes. Most operate without life jackets.

Villagers in rural Pakistan use such boats to avoid higher costs of automobile transport on ramshackle roads that are often far from their homes.

But women are not widely encouraged to learn how to swim in Pakistan, where conservative modesty codes still govern much of of their public behaviour.