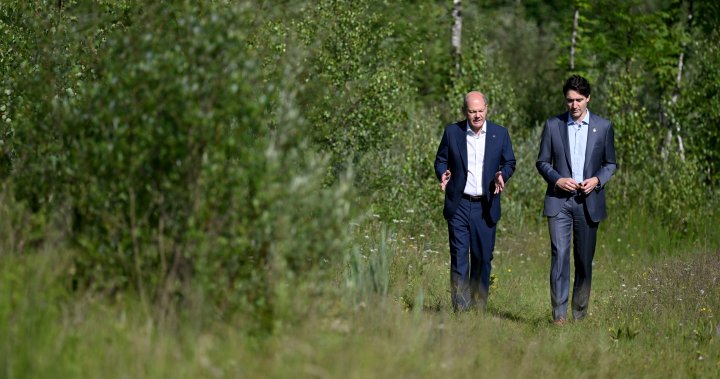 Six months into Russia‘s illegal and bloody invasion of Ukraine, the costs of President Vladimir Putin‘s warmongering continue to grow.

First and foremost, these costs are in the rivers of Ukrainian blood spilled so far, and still yet to flow. Ukrainian lives have been lost, displaced and forever altered — men, women, children and families ripped apart, as the world continues to bear witness to the ongoing invasion of a sovereign democracy.

However, the impacts of the butchery in Ukraine have spilled over beyond its borders, causing higher prices and shortages of everything from grain to electronic chips to fuel.

It is the latter that’s sparking the latest round of debate and criticism, after the Canadian government agreed to let Siemens Canada return six turbines under maintenance in Montreal to Germany — to be handed over to Russia‘s Gazprom to install back onto the Nord Stream 1 pipeline.

That decision prompted a furious response from Ukrainian President Volodymyr Zelenskyy, warning that concessions to Russia will only embolden further attempts to extract more concessions from allies.

“It is difficult, but at the same time it’s a tactical decision,” said Sabine Sparwasser, Germany’s ambassador to Canada, in an interview Wednesday with Global News. “We do not wish to allow Russia to have an excuse to just stop providing Europe with the gas that it still needs.”

So what makes the decision so significant, and why did Germany plead for the turbine return?

First, let’s back up.

First opened in 2011, Nord Stream 1 refers to the pipeline system that runs from Russia into Germany, and from Germany into roughly a dozen other European countries.

In that pipeline flows natural gas — 55 billion cubic metres of it each year, to be precise.

The pipeline is a crucial source of gas for major European economies, most particularly Germany, which chose to depend on Nord Stream 1 for roughly one-third of its natural gas supplies.

France gets a little shy of one-fifth of its natural gas from the pipeline as well, and European countries have paid Russia an estimated $89 billion for fuel since Feb. 24, when the invasion of Ukraine began.

How the EU’s ban on Russian oil will impact global markets, Moscow

Nord Stream 1 was planned to be combined with another pipeline, Nord Stream 2, but the approval for the latter was axed earlier this year as part of the European response to Russia’s invasion of Ukraine. European leaders also agreed to slash Russian oil imports by 90 per cent by the end of this year — a move aimed at choking off oil revenues for Putin’s war chest.

The consortium that owns Nord Stream 1 is called Nord Stream AG and its largest stakeholder is Gazprom — a Russian state-owned oil company that earlier this year slashed flow through the pipeline by 40 per cent amid successive rounds of economic sanctions laid by Europe and the collective West.

And now, that flow is running dry.

Why are we talking about this now?

For years, Germany and other European countries have faced questions over the strategic risks of their choice to become reliant on Russia for such a critical resource as natural gas.

Now, they are scrambling — pivoting to try to diversify their suppliers, speed up the transition to cleaner technologies, and shore up energy supplies ahead of the winter months.

That race comes as Gazprom has blamed the fuel supply cuts on technical issues with the condition of the Siemens turbines at its compressor stations powering the pipeline.

However, that claim is under scrutiny from European leaders who fear the turbines are simply a cover for Russia weaponizing the supply of energy, and a precursor to a total shutdown of the pipeline that began on Monday and — according to the maintenance schedule — will only last 10 days.

German Vice Chancellor Robert Habeck has said he suspects that Russia may cite “some little technical detail” as a reason not to resume gas deliveries, adding that gas is now a “scarce commodity” in Germany.

“We must not fool ourselves: The cut in gas supplies is an economic attack on us by (Russian President Vladimir) Putin,” Habeck said in June.

Habeck, who also serves as minister for the economy, has also warned gas rationing can’t be ruled out.

The German government has also activated its “alarm stage” over the shortages and Habeck acknowledged to Bloomberg that “it was a grievous mistake that Germany was so dependent on one country with the energy supply, and this country is Russia.”

Why is the turbine return so contentious?

After news of the turbine return broke on Sunday, Ukrainian officials quickly denounced the move.

In a statement posted on the government’s website, the energy and foreign ministries condemned Canada’s decision with a warning that doing so is catering the sanctions “to the whims of Russia.”

The Ukrainian government said it sets a “dangerous precedent.”

In a nightly video address Monday, Ukrainian President Volodymyr Zelenskyy said Russia will exploit the sanctions exemption “because every concession in such conditions is perceived by the Russian leadership as an incentive for further, stronger pressure.”

He warned Russia would move next to cut off its supply of natural gas to Europe “at the most acute moment.”

“This is what we need to prepare for now, this is what is being provoked now,” he warned.

Trudeau, however, defended the decision on Wednesday as one vital to mitigating Russian attempts to divide NATO allies on the sanctions regime.

He said in response to questions from journalists that sanctions “aren’t designed to hurt allies and their populations,” but to inflict pain on Russia.

“This was a very difficult decision but we have seen Russia consistently trying to weaponize energy as a way of creating division amongst the allies, of undermining the general populations support for this essential effort in Ukraine,” he said.

Trudeau added the government recognizes Germany and Europe is facing an “energy crisis” and that maintaining the support of the populations in those countries is crucial for the governments to keep up the sanctions on Russia and the support flowing to Ukraine.

“We need to hold together, particularly faced with the attempts by Russia to weaponize energy policy, to divide us amongst ourselves,” Trudeau continued, and emphasized the need to “ensure that in Europe, not just governments but populations stay steadfast and generous in their support for Ukraine.”

The sanctions exemption for the turbine repair will last for two years, during which time Trudeau says Germany and Europe are expected to reduce their dependence on Russian oil.

Norway and the Netherlands in particular have been growing sources of energy, Sparwasser said, and added that the one-third of gas supply that Russia represents is down from earlier this year when Russian gas accounted for half of Germany’s supply.

“We want to continue that. But to get over the next year or so, European states will still need to fill up their reservoirs,” she said.

“If Russia decides that it wants to cut off for political reasons and there’s nothing we can do about it, we’ll have to cope. But as long as we can still maintain some delivery from Russia, it is something that allows our economies and our countries to be stable, to become more independent, and actually to support Ukraine better.”

The U.S. State Department also backed the move in an unusual statement of support on Monday.

“In the short term, the turbine will allow Germany and other European countries to replenish their gas reserves, increasing their energy security and resiliency and countering Russia’s efforts to weaponize energy,” said spokesperson Ned Price.

“We are grateful for the partnership with Canada and Germany and their solidarity in defence of Ukraine in the wake of Russia’s unprovoked and unjustifiable war against its sovereign neighbour and the significant sanctions they have each put in place to hold the Kremlin accountable.”

The question now remaining is whether Russia, with the turbines in hand, will turn the pipeline back on without the potential pretense of their repair as an excuse for cutting off supplies.

Sparwasser said there is no clear answer.

“From the beginning, we’ve said we do not want to give Russia and Putin the kind of excuse to say, ‘Oh, you brought it upon yourself that we will not on our own obligation to deliver gas any more because you do not deliver the turbine,’” she said.

“So we’re taking away that excuse. The turbine is not the issue, and we will have to see what the decision of Russia is.”

With files from Global’s David Baxter and Reuters.