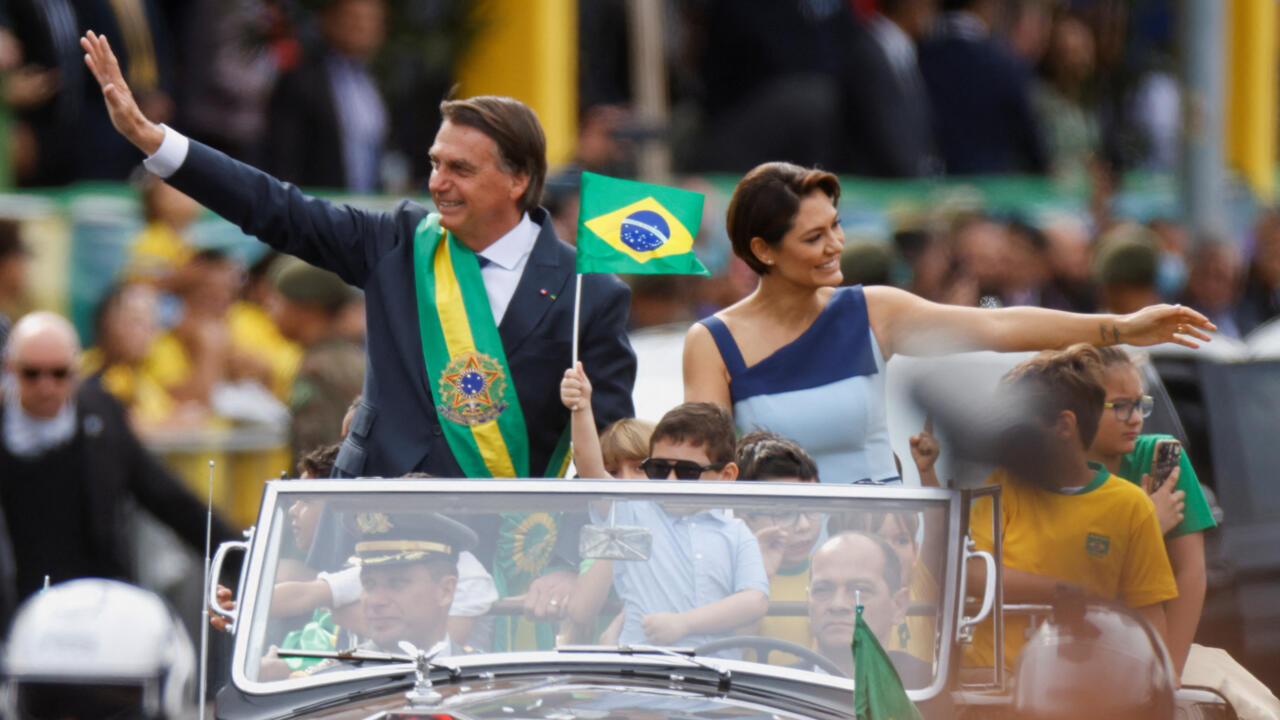 Brazil is deeply divided heading into October’s elections, with the far-right incumbent behind leftist ex-president Luiz Inacio Lula da Silva in opinion polls but looking determined to flex his muscle with an Independence Day show of strength, including military parades in Brasilia and Rio de Janeiro and rallies by his supporters across the country.

After taking in a giant procession of soldiers, tanks and tractors down the Esplanade of Ministries in Brasilia, Bolsonaro gave a fiery speech to a sea of green-and-yellow clad supporters massed in the capital.

The ex-army captain denounced polls from leading public opinion institute Datafolha – whose latest shows him trailing Lula 45 percent to 32 percent – as “a lie,” and called the election campaign “a battle of good against evil.”

“They won’t return to the scene of the crime,” he said, referring to the controversial corruption charges that have dogged Lula, the charismatic ex-metal worker who led Brazil from 2003 to 2010. “The people are on our side – the side of good.”

Bolsonaro was later due to attend another military parade in Rio, where backers had already flooded the avenue along iconic Copacabana beach as throngs prepared massive motorcycle and jet-ski processions – two of the president’s favorite hobbies.

Bolsonaro’s open hostility toward the Supreme Court and electoral authorities was a recurring theme.

“Brazil is facing huge tension because they’re trying to install communism, with help from the courts,” said one Bolsonaro supporter in Rio, 53-year-old businessman Claudio Berrios, draped in the Brazilian flag and sporting a military-style camouflage shirt.

“Our country is being ruined by the (high) court’s dictatorship,” she told AFP. “We love our president. Everyone I know supports him. He’s going to win. There’s no way he could lose.”

Last year on Brazil’s national day, Bolsonaro caused controversy with a fiery speech saying “only God” could remove him from office and vowing to stop heeding rulings by Supreme Court Justice and top electoral official Alexandre de Moraes, whom the president considers an enemy.

That September 7, Bolsonaro supporters broke through a security cordon in Brasilia on the eve of the festivities and threatened to invade the Supreme Court.

“September 7 will be politicized by definition this year, coming in the home stretch of the campaign,” said political scientist Paulo Baia of the Federal University of Rio de Janeiro (UFRJ).

“It will be tense and potentially violent,” he told AFP.

Critics accuse the president of blurring the line between his official duties and his campaign with the festivities.

In Rio, a group of pastors from Brazil’s powerful Evangelical Christian community has rented a stage where the commander in chief is expected to address the crowd.

Donations have also poured in from another largely pro-Bolsonaro group, Brazil’s giant agribusiness sector, to help fund Independence Day events across the country.

The Bolsonaro camp has been highly active on social networks, urging supporters to turn out en masse for the day.

Bolsonaro’s congressman son Eduardo raised eyebrows on Twitter Monday by calling on Brazilians “who have legally purchased guns” – a contingent his father has sought to expand with aggressive gun-control rollbacks – to enlist as “volunteers for Bolsonaro.”

Such comments have added to fears of violence around the election if Bolsonaro, who regularly attacks Brazil’s voting system as fraud-ridden – without evidence – follows in the footsteps of his political role model, former US president Donald Trump, and refuses to accept the result.

Lula apparently plans to keep a low profile Wednesday, but has rallies scheduled for Thursday and a meeting with Evangelicals, a key voting bloc, on Friday.