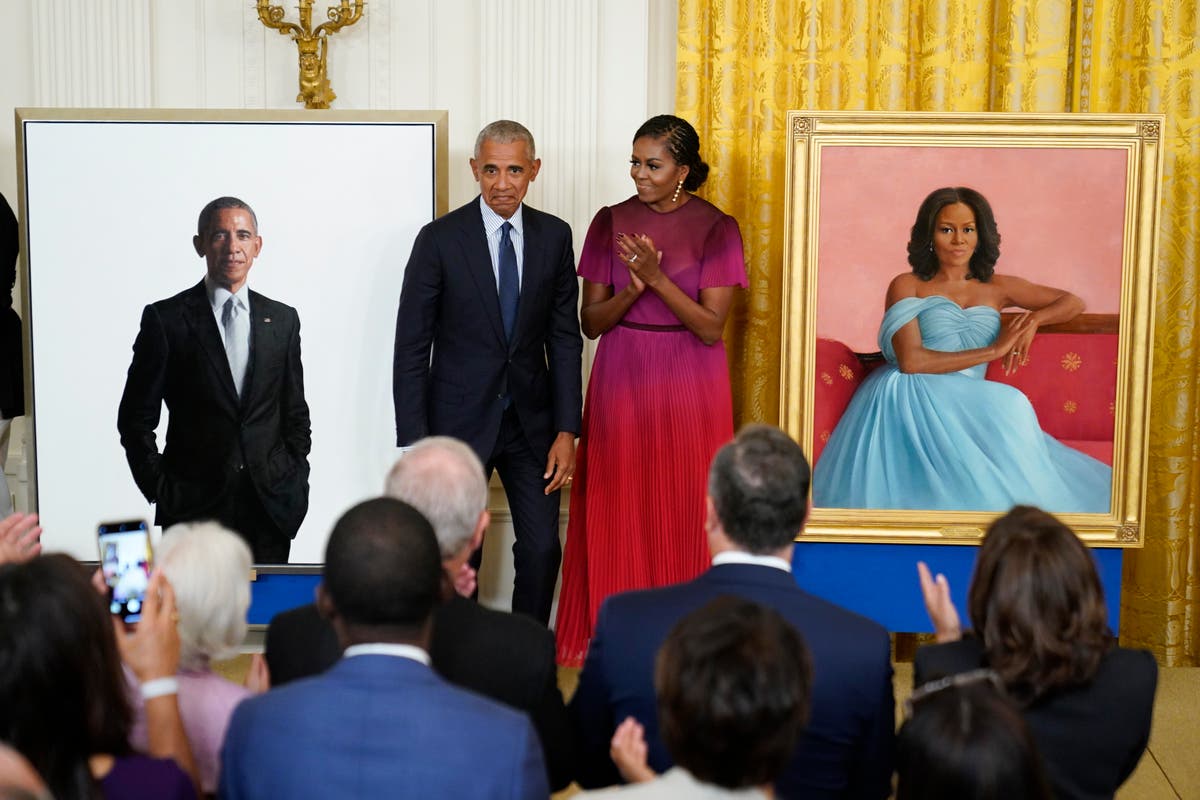 It has been more than five years since President Barack Obama and First Lady Michelle Obama, departed 1600 Pennsylvania Avenue.

On Wednesday though, they returned, as President Joe Biden and his wife, Jill Biden, revived the beloved Washington tradition of the unveiling of official White House portraits that has for decades managed to transcend partisan politics — after an awkward and anomalous gap in the Trump years.

The day marks the first return visit to the White House for Ms Obama since leaving in 2017, but the second by Mr Obama, who earlier this year attended a ceremony to mark 12 years of Obamacare.

In remarks before the unveiling, Mr Biden offered high praise to the man who occupied the Oval Office when he was vice president. Mr Obama reciprocated and also lightened the mood with jokes and “spicy” comments (as described by Mrs Obama to more laughter).

In 2012 the Obamas hosted George W Bush and Laura Bush for the unveiling of their portraits.

Former First Lady Michelle Obama has tweeted out her thanks to artist Sharon Sprung who painted her, describing her as a “brilliant artist who joins a small, but mighty group of women who have painted an official White House portrait”.

She also posted a video about the creative process.

People are praising the “stunning” portraits of Barack and Michelle Obama after they were unveiled during a White House ceremony.

The Independent’s Chelsea Ritschel reports on the reaction to the latest additions to the White House collection.

First Lady Michelle Obama wears a formal blue dress and is seated on a sofa in the Red Room. Her portrait was also painted entirely from photographs that were taken by artist Sharon Sprung in various locations on the State Floor of the White House.

Sharon Sprung (b.1953) has taught at both the Art Students League of New York and the National Academy School for the past 30 years. Her paintings and portraits have been exhibited since the late 1970s, including many one-person shows in New York City. Through her work on the small details of her subjects, such as their eyes, nose, or lips, she gets to know her sitters.

Her paintings are jewel-like in their color palettes, a credit that she gives to her use of Vasari handmade paint. By methodically manipulating the layers of paint, she works to mimic the complexity of real life in her portrait compositions.’

Obama: ‘I want to thank Robert McCurdy for his extraordinary work’

“Robert is known for his paintings of public figures, and I love how he paints people exactly the way they are,” said Mr Obama in a tweet, including a video on the creative process behind the production of the latest additions to the White House collection.

President Barack Obama, dressed in a black suit with a grey tie, stands prominently at the center of the canvas. The photorealistic portrait was painted entirely from photographs that were taken by the artist, Robert McCurdy, during a short photo session. It is his preference to work from images rather than sketches completed during sittings.

Robert McCurdy (b.1952) spends at least a year on each of his photorealist portraits. His meticulously rendered works capture every minute detail, down to the fibers on his subjects’ clothing. The stark white backgrounds of his portraits allow the viewer to establish a relationship with the subject; the focus shifts from the celebrity status of the individual to the viewer’s direct response to that individual as a human being. The composition also allows the viewer to establish their own meaning and interaction.

McCurdy’s commissions include many notable subjects; Toni Morrison, Jane Goodall, Muhammad Ali, and Neil Armstrong are among his sitters.

Here they are: Obamas’ White House portraits being unveiled

The American artist whom former President Barack Obama selected to paint his official White House portrait says the “stripped down” style of his works helps create an “encounter” between the person in the painting and the person looking at it.

Robert McCurdy likes to present his subjects without any facial expression and standing against a white background, which is how America’s 44th and first Black president will be seen for posterity, in a black suit and gray tie, when his portrait is finally revealed on Wednesday.

The former first lady chose artist Sharon Sprung to do her portrait. She is depicted seated on a sofa in the Red Room, wearing a formal light blue dress.

Here they are: Obamas’ White House portraits being unveiled

Obama praises Biden for guiding US through ‘perilous times’

Former president Barack Obama returned to the White House on Wednesday for the unveiling of his and Michelle Obama’s official portraits, offering strong words of praise and support for the man who served as his Vice President for eight years, President Joe Biden.

The first lady’s remarks focus on the importance of family, recalling the night in 2008 when the Obama-Biden ticket won the election and they celebrated in Grant Park in Chicago.

There was laughter and music and dancing. There were tears as friends and strangers alike help each other overwhelmed with the joy that hope and change had been realized. The crowd roared, radiating the sense that anything we could dream was within our reach. But at the heart of that enormous moment was a family.

Two little girls who would grow up exploring the secret halls and hideaways of the White House. A mom who would bring her whole heart to serving the American people as First Lady while still guiding and protecting her family with a ferocious devotion. A grandmother who would do absolutely anything for the family she loves and even move to Washington, DC. And a father who showed the world the meaning of Yes We Can.

And when I look at these portraits, I see family your family the family we all built and the families across America that we served together. I see love, joy and fellowship and we are honored to hang them today. And share them with the world.

After Michelle Obama introduces Jill Biden there is a particularly amusing moment when everyone in the room gives her a standing ovation apart from her own husband, which she delights in pointing out, chiding him to laughter from the room.

Michelle Obama says their portraits on the White House walls are “a reminder of what this country is about — it’s not about blood or pedigree or wealth, it’s about everyone getting a fair shot”.

She adds that despite those who want to say of America “that story has lost some of its shine, that division and discrimination has dimmed some of its light,” that she and her husband still know “our democracy is so much stronger than our differences.”