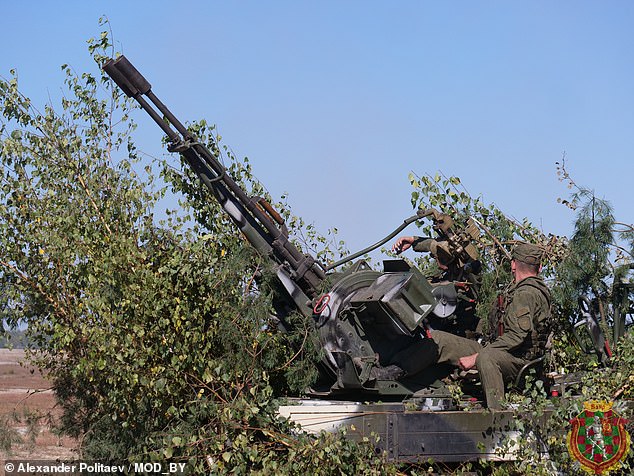 Belarus has started military exercises by the city of Brest near the Polish border, its capital Minsk and the northeast region of Vitebsk, the defence ministry said on Thursday.

Belarus, a close ally of Russia, said the exercises, located just 20 miles from Ukraine’s border and six miles from Poland, will practice ‘liberating territory temporarily seized by the enemy’ and regaining control over border regions.

Russian President Vladimir Putin used similar rhetoric to justify his invasion of Ukraine earlier this year and had staged wargames near the border before sending his troops into battle.

Minsk has complained for months about NATO countries amassing soldiers near its borders – Poland, Lithuania and Latvia are all members of the alliance – and is increasing the amount and intensity of its own military exercises in response.

The Belarusian defence ministry added that the exercises, which are set to last until September 14, will practice ‘ensuring forceful measures of martial law’ as well as fighting against the ‘enemy and illegal armed formations’.

Up to 7,500 military personnel, 260 armored vehicles and about 30 aircraft and helicopters will take part in the exercise, local media reported.

Belarus has started military exercises by the city of Brest near the Polish border, its capital Minsk and the northeast region of Vitebsk, the defence ministry said on Thursday 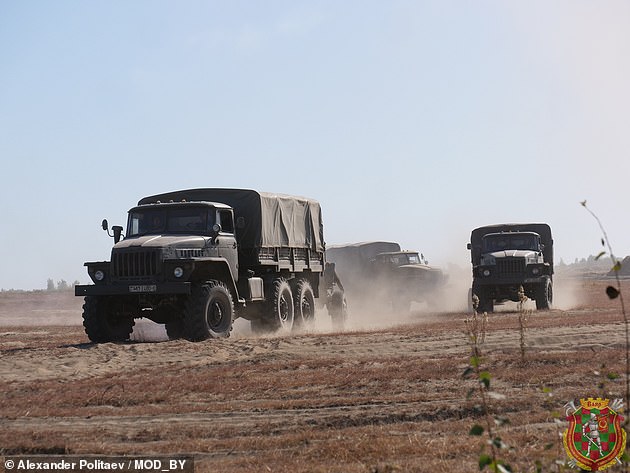 It said the exercises, which are set to last until September 14, will practice ‘liberating territory temporarily seized by the enemy’ and regaining control over border regions 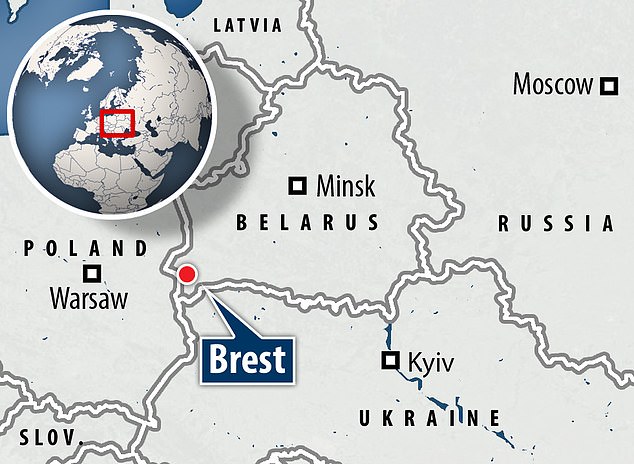 Belarus has started military exercises by the city of Brest near the Polish border, its capital Minsk and the northeast region of Vitebsk

The European Union on Thursday blasted the authorities in Belarus for briefly detaining a senior EU diplomat in Minsk.

“This illegal detention of our diplomat is a serious breach of the Vienna Convention on Diplomatic Relations that guarantees the personal inviolability of diplomats, and undermines their security in Belarus,” Stano said.

The EU diplomat was held by Belarusian police after leaving a court hearing where “10 political prisoners were sentenced to unjustifiably long and harsh sentences”, Stano said.

“We have demanded very strongly explanations for this grave incident and stressed that this cannot be repeated,” Stano said.

Ties between the EU and Belarus have worsened sharply since President Alexander Lukashenko launched a brutal crackdown on opponents in the wake of a disputed 2020 election.

The EU has imposed sweeping sanctions against Minsk – including targeting Lukashenko personally – over the repression and the supporting role played by Belarus in Russia’s invasion of Ukraine.

According to the defence ministry, the level of troops and military equipment involved in the exercise did not require them to provide notice under OSCE guidelines.

The exercises will take place in Minsk, the northeast region of Vitebsk, and by the city of Brest, which is located just 20 miles from Ukraine’s border.

But Gromov said that the ‘probability’ of Belarus launching an attack on Ukraine ‘remains low’, reports Ukrainian news agency Interfax.

Lukashenko’s support of the war has prompted international criticism and sanctions against Minsk.

Belarus is a close ally of Russia and has allowed Moscow to use its territory to send thousands of troops into neighbouring Ukraine, as well as to launch missiles from its airspace.

In July, Russia is said to have boosted its military capabilities in both the air and on the ground in Belarus amid high tensions with the West.

Russia is said to have taken control of Prybytki Air Base in Belarus where it already deploys an S-400 battalion with Pantsir and Iskander missiles.

Belarus, a close ally of Russia, said the exercises, located just 20 miles from Ukraine’s border and six miles from Poland, will practice ‘liberating territory temporarily seized by the enemy’ and regaining control over border regions.

Lukashenko has publicly stood by his longtime ally Vladimir Putin, who has pumped billions of dollars into shoring up his Soviet-style, state-controlled economy with cheap energy and loans. 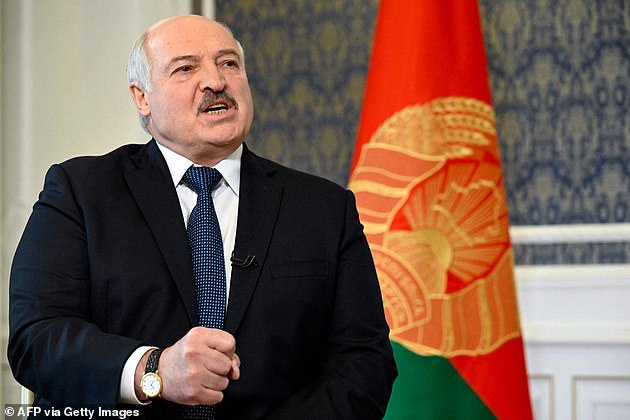 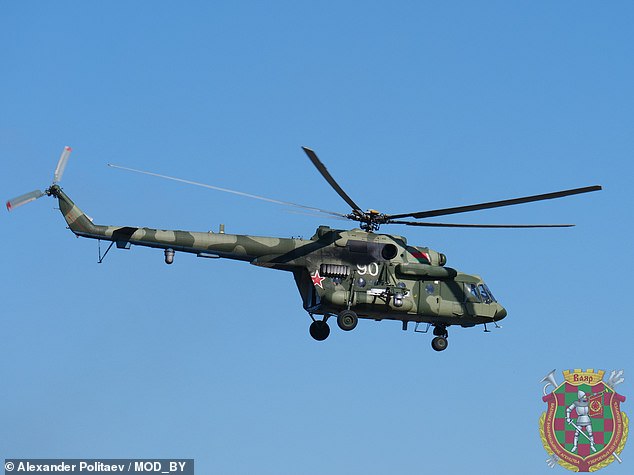 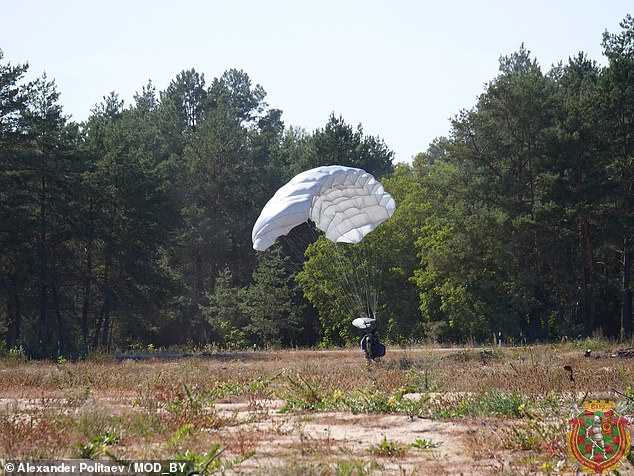 According to the ministry, the level of troops and military equipment involved in the exercise did not require them to provide notice under OSCE guidelines. Pictured: A soldier wearing a parachute lands on the ground during the military exercises in Belarus

Russians are flocking to Belarus to access sanctions-free shopping

Russians are flocking to neighbouring Belarus to access Western goods and financial services they are unable to get in Russia due to sanctions imposed on Moscow over the invasion of Ukraine.

Travel agencies have said that there has been a more than 60 per cent increase in the number of Russians travelling to Belarus.

In Belarus, Russians are able to shop at brands such as H&M and open a bank account at major banks that will issue Visa or MasterCard debit cards.

‘Brands like H&M, Bershka and Pull&Bear left Russia but we [who travel to Belarus] can dress in them from head to toe,’ Yelena Shitikova, an executive at travel agency Family Travel, which offers tours to Belarus, told the Moscow Times.

‘Everything there is working, there are no sanctions.’

Some travel agencies have even launched shopping holidays for Russians wanting to buy goods they can no longer buy in their own country.

‘Tourists started going to Belarus more often and we also noticed that they are going shopping among other things, so we decided to offer this product,’ a spokesman from the tour agency told the newspaper.

‘The demand was very high for the first trip and for the subsequent ones as well.’

Belarus is a close ally of Russia and has allowed Moscow to use its territory to send thousands of troops into neighbouring Ukraine, as well as to launch missiles from its airspace.

Belarusian President Alexander Lukashenko’s support of the war has prompted international criticism and sanctions against Minsk – but major retailers are still open in Belarus.

Russia ‘can’t by definition lose this war,’ Lukashenko said last month, noting that Belarus is the only country standing by Moscow, while ‘as many as 50 states have joined forces’ on Ukraine’s side.

He added that Putin isn’t seeking a direct conflict with NATO, and the West should ensure that one doesn’t happen.

‘He most likely does not want a global confrontation with NATO. Use it. Use it and do everything for that not to happen. Otherwise, even if Putin doesn’t want it, the military will react,’ the Belarusian leader warned.

Lukashenko’s support of Russia’s invasion of Ukraine has stopped short of deploying his own troops there, but it still has drawn criticism from the Belarusian opposition and calls for more sanctions on him and the country.

Opposition figures say ordinary Belarusians don’t support the invasion. Hundreds of them who live in Ukraine have been affected by the war, and some have become volunteers, fighting alongside Ukrainian forces.

Lukashenko said that Belarus poses no danger to others, even as its military continues to conduct drills close to Ukraine and Poland’s borders.

He said: ‘We do not threaten anyone and we are not going to threaten and will not do it.

‘Moreover, we can’t threaten – we know who opposes us, so to unleash some kind of a conflict, some kind of war here… is absolutely not in the interests of the Belarusian state. So the West can sleep peacefully,’ he said.

He blamed the West — especially Washington — for fueling the conflict between Russia and Ukraine.

‘The U.S. wants to seize the moment, tying its allies to itself, and drown Russia in the war with Ukraine.

‘It’s their goal — to sort out Russia, and then China,’ he said.

The military drills in Belarus are being held just days after Russia launched its major Vostok war games.

Vladimir Putin oversaw the large-scale military drills in Russia’s far east this week before the exercises finished on Wednesday. The Vostok war games also involved troops from China and India.

By proceeding with the four-yearly Vostok exercises, Putin appeared to be sending a signal that Russia’s military is able to conduct business as usual despite the demands of the Ukraine war, where his forces have suffered heavy losses in men and equipment while being fought to a virtual standstill after occupying around a fifth of the country. 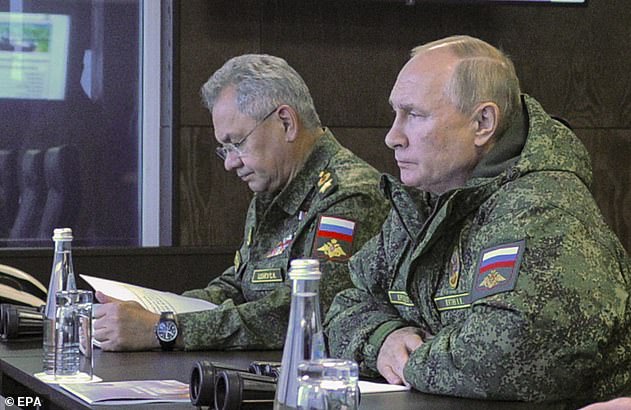 The Russian leader, 69, observed the major military exercises from inside a command post while sitting next to his defence minister Sergei Shoigu who has been ‘sidelined’ by Putin due to Russia’s heavy losses in Ukraine 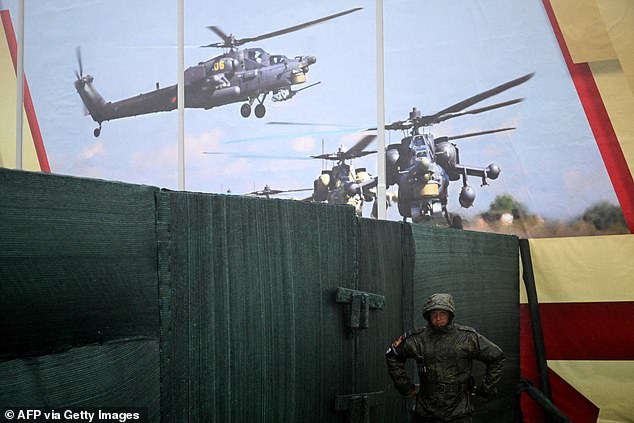 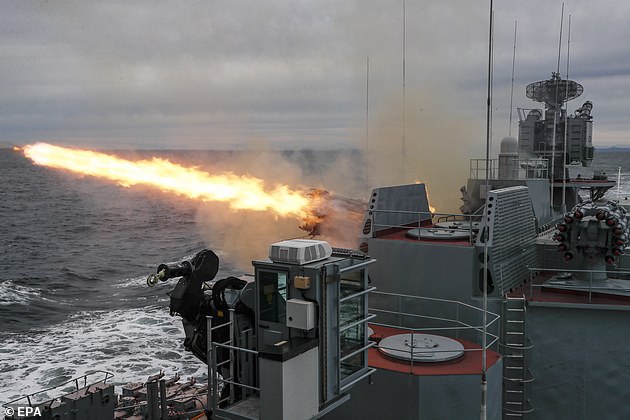 Moscow has insisted that its capacity to stage the military exercise would in no way be affected by Russia’s invasion of Ukraine.

But the 50,000 Russian troops that are said to be taking part in the Vostok 2022 war games are just a fraction of the 300,000 that drilled alongside those from China and Mongolia four years ago. Western military analysts say they believe both figures are exaggerated.

Russia’s defence ministry said 140 military aircraft, 60 warships and over 5,000 items of military hardware will be deployed – a marked decline on the 1,000 aircraft and 36,000 tanks and armoured vehicles that were sent into the 2018 manoeuvres.

The smaller scale of this year’s Vostok war games reflects the major losses that Russian troops and artillery have suffered in Ukraine since the invasion began six months ago.

‘This is going to be the smallest strategic-level exercise in years because the entire ground forces potential is engaged in operations in Ukraine. So the exercise will have to be very small,’ said Konrad Muzyka, director of the Rochan military consultancy based in Poland.