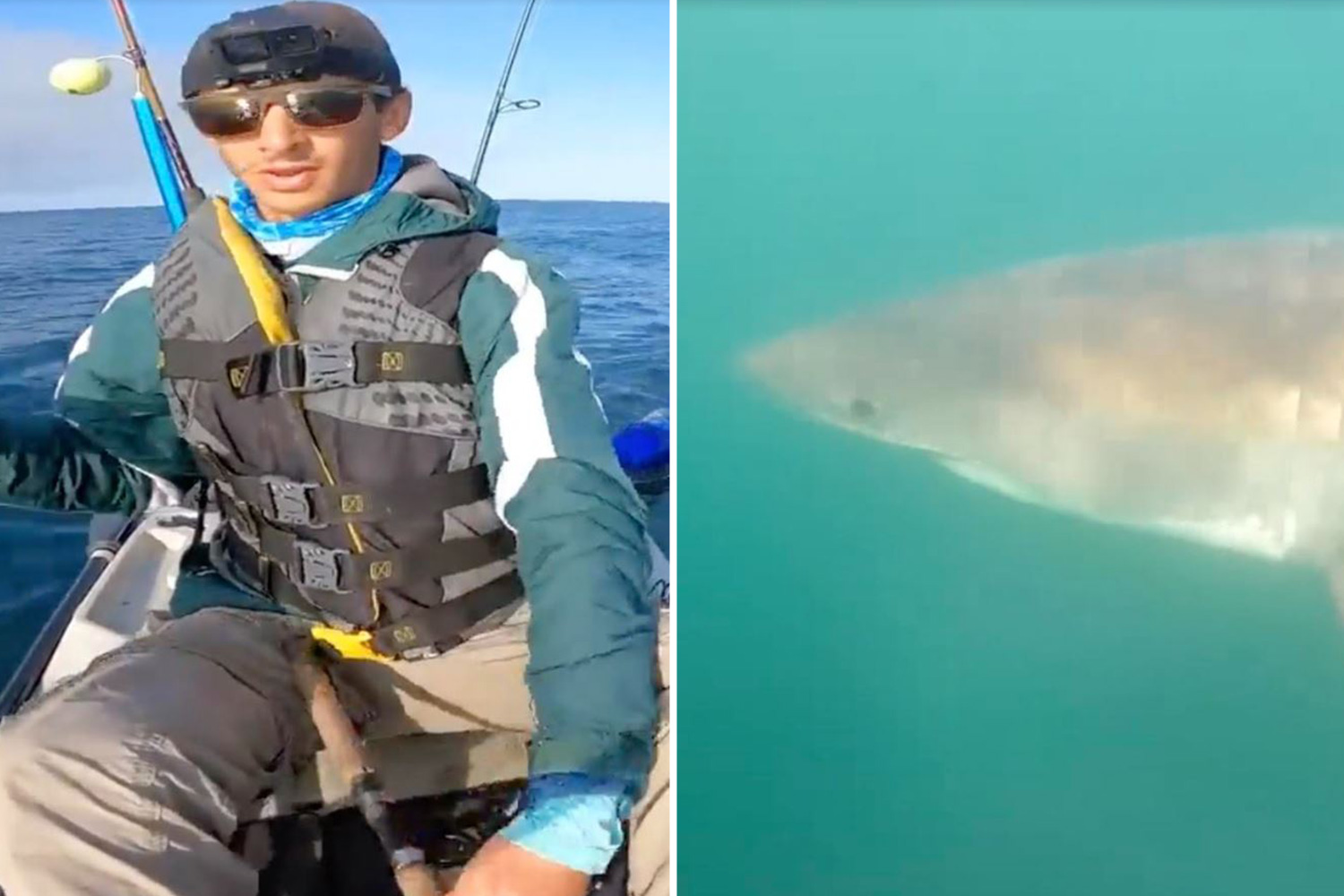 HEART-STOPPING footage shows an enormous great white shark chillingly circling a man’s kayak amid a spate of maulings off the California coast.

Ilan Toussieh was left terrified when the underwater predator interrupted his paddling session.

The keen fisherman had headed out on the water back in July when he spotted the creature sinisterly lurking beside him.

He captured footage of the extraordinary encounter after noticing the “freakin’ massive” great white on California’s central coast.

The content creator shared the hair-raising clip to his YouTube channel, Fisherman’s Chronicles, before it went viral.

Video shows Illan realising the beast had approached him while sat inside his kayak, which was rigged up with his recording equipment.

He had initially thought it was a “huge grey submarine”, before the shark began to circle his vessel.

The kayaker can be heard crying: “That’s a huge great white shark, oh my god!

“That’s a huge, huge great white shark. Oh my god, that’s the size of my kayak.”

As the predator continues to menacingly loop around him, plucky Ilan grabbed his GoPro camera to also film the shark in the water.

Despite being consumed by fear, he managed to record incredible footage of the great white in its natural habitat.

But while still assuming his life was “potentially in jeopardy”, the experienced seaman kept his cool and simply “enjoyed the ride”.

He told the Huffington Post: “The shark was about as long as my kayak and nearly just as wide.

“Realizing it could easily flip my kayak had it wanted to, I felt intimidated as I thought my life was potentially in jeopardy.

“As it calmly circled me I realized there was not much I could do about it and just relaxed and enjoyed the ride.

“Trying to escape would likely lead to the shark becoming more curious and possibly identifying me as a prey item, so I stayed put and did my best to record the predator on my GoPro cameras.”

The shark eventually swam out of shot in the dark blue water, although Ilan suspects it may have lingered around out of his sight for a little longer.

As it calmly circled me I realized there was not much I could do about it and just relaxed and enjoyed the ride.

He described the rendezvous as “one of the most incredible and certainly humbling experiences in my time fishing.”

The kayaker also applauded the majestic creature for “gracefully swimming off in search of something tastier”.

Great white sharks can be found skulking in waters off the coast of California, particularly during the warm, summer months.

Swimmers have been warned to stay vigilant while taking a dip after a surge of shark attacks in recent months.

Horrifying video showed how beach bystanders rushed to the aid of a man after he was mauled by a predator at Lover’s Point Beach.

Steve Bruemmer was only 50 yards out in the water when he was bit on June 22 this year.

He lost 30 pints of blood after the ocean giant chomped his stomach, leg and arm in one massive bite.

Steve was hauled 100 yards to shore by a surf instructor and two paddleboarders as blood spurted from his wounds.

Wildlife officials confirmed that there are seldom reports of sharks “much bigger than 15 to 18 feet long.”

Amazingly he is expected to make a good recovery after the huge shark mauled him – that made him the second victim in California in 2022.

Steve staunchly believes he was spared in the attack due to one simple biological fact.

A rise in shark incidents has also been recorded in the northeast US.

There have been 22 US shark attacks thus far this year, in what biology experts are calling, “a new normal.”

Great whites can live for up to 60 years and never stop growing, although the growth rate slows in later life.