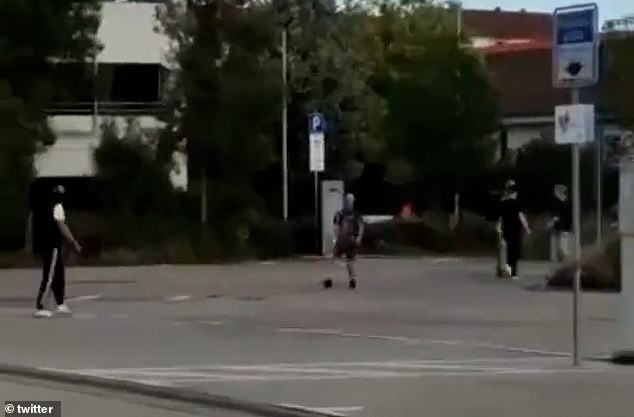 By Chris Jewers For Mailonline and Afp

A knife-wielding man shouting ‘Allahu Akbar’ wounded two people in a southern German town on Thursday before being fatally shot by police.

The 30-year-old man attacked several passers-by ‘with at least one knife’, near the train station in Ansbach, a Bavarian town close to Nuremberg, local police said.

Two people were injured but their lives were not in danger, the statement said.

When security forces intervened, the assailant ‘attacked the police’ who opened fire and fatally wounded him, the statement added.

Investigators said they were investigating a possible ‘Islamist or terrorist context’.

‘The man shouted ‘Allahu Akbar’ several times during the commission of the crime,’ police said, adding that they were investigating ‘whether the crime had a link with an Islamist or terrorist context’. 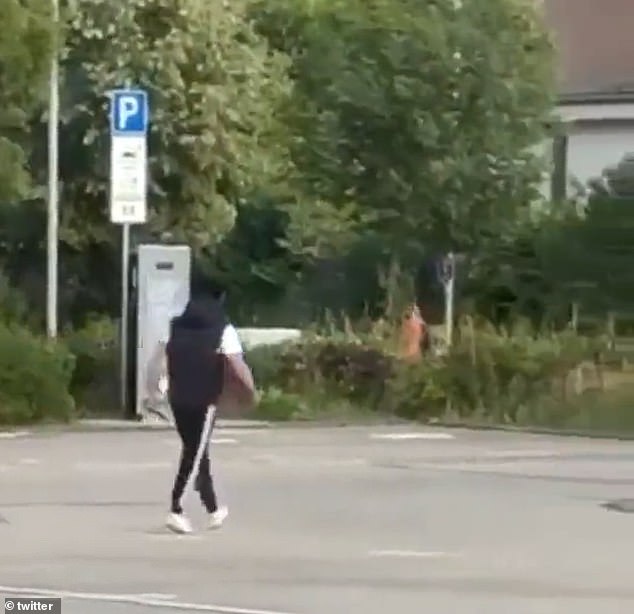 A man, seen in the video wearing a navy gilet over a white t-shirt, is shown stalking a group of people through a car park, while holding a long blade (pictured), and chasing after them

A man, seen in the video wearing a navy gilet over a white t-shirt, is shown stalking a group of people through a car park – while holding a long blade.

As he nears the group, he suddenly sprints towards them. The people run from the man, as the sound of sirens can be heard getting closer to the scene. Shouting can be heard in the footage, but the words ‘Allahu Akbar’ are not discernible.

The footage ends with the man running down a path and out of sight behind a hedgerow. Some time after, the man was shot dead by police. According to German tabloid Bild, he ‘died on the spot’.

Ansbach was the site of a 2016 terrorist attack, in which a suicide bomber injured 15 people outside a wine bar in the town.

The bomber was identified as  Mohammad Daleel – a 27-year-old Syrian asylum seeker who had pledged allegiance to Islamic State.

He was the only person killed in the incident.