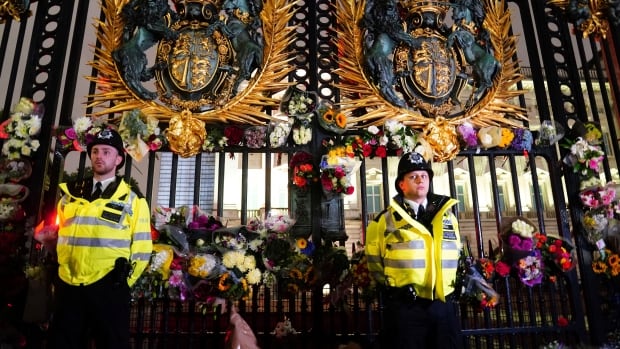 Queen Elizabeth’s funeral, expected 11 days from now, will be the culmination of an official mourning period that began with her death Thursday at Balmoral.

But planning to honour the 96-year-old’s life began decades ago, in the strictest of secrecy, under its own code name — London Bridge.

As little as possible will be left to chance over the next week and a half, leading up to a funeral at Westminster Abbey in London, followed by the committal and burial at St. George’s Chapel in Windsor Castle, west of London.

As much as the next several days are about remembering the Queen, they are also about the beginning of the next reign, as Prince Charles became King Charles III immediately upon his mother’s death and assumes the role he has been preparing for throughout his life.

In the royal plan, the days of mourning are identified as D (day of death) plus a number. However, D has been designated as Friday, instead.

Charles addressed the nation on Friday. Here is his speech:

In his first address to the nation and the Commonwealth, King Charles pays tribute to his ‘darling mama’ and pledges to serve with ‘loyalty, respect and love.’

Prime Minister Liz Truss and other senior ministers are scheduled to attend a remembrance service at St. Paul’s Cathedral in London on Friday evening.

While other events may change, here’s what’s expected each day over the next week and a half.

Charles became King the moment his mother died, but on D+1, he is expected to formally take on the role as the Accession Council meets at St. James’s Palace.

Members of the Privy Council are summoned to the historic spot just down the road from Buckingham Palace. London’s Lord Mayor and aldermen are invited, along with high commissioners from realms within the Commonwealth.

After the official declaration of the Queen’s death and the proclamation of Charles as King, he will read a declaration and take an oath to preserve the Church of Scotland.

In Canada, the Governor General receives the proclamation for Canada, with Rideau Hall determining how that is done.

Proclamations are read around the United Kingdom.

Canada’s delegation to travel to London is announced.

Charles begins travelling around the U.K. to meet and mourn with members of the public, starting with a trip to Edinburgh. His wife, Camilla, who is now Queen Consort, is expected to join him.

In Canada, condolence books will begin to be available for members of the public to sign.

Charles will continue travelling around the U.K., visiting Belfast.

Condolence books will continue to be available in Canada.

The Queen’s coffin is moved from the Throne Room at Buckingham Palace to the Bow Room, where prayers will be said. The Imperial State Crown will be placed on the coffin, along with a wreath of flowers. Charles and other members of the Royal Family are expected to be present.

The coffin will then be moved in a ceremonial procession via gun carriage to Westminster Hall, a Gothic building that has an extensive political and royal history and is the oldest building in the U.K. Parliament.

At 4 p.m., lying in state will begin, and will continue for five days, 24 hours per day, except for 30-minute periods for cleaning.

There will be a queuing system, with people lining up outside Parliament and across the Thames river, and for some distance after that.

In Canada, the condolence books will continue to be available.

Lying in state continues, as do the condolence books in Canada.

Charles continues his U.K. tour with a visit to Wales, as the lying in state also continues.

The Queen’s four children will take part in a vigil at Westminster Hall in the evening, when Charles returns.

Preparations for the funeral continue and rehearsals are carried out.

Overseas leaders are expected to begin arriving in London.

Charles may also go to a control centre overseeing the events and see the operational side of things and thank those who are involved.

Heads of state and other dignitaries arrive in London, with heads of state likely to attend the lying in state at Westminster Hall.

The Queen’s grandchildren might also hold a vigil at Westminster Hall.

Charles is expected to meet with the British prime minister and greet members of the public who have gathered.

D+10 or later – The funeral and burial

Two hours later, members of the Royal Family arrive at Westminster Hall and the coffin is placed on a gun carriage.

At 10:44 a.m., the procession to Westminster Abbey begins, with members of the Royal Family following on foot.

The hour-long funeral, which will be the first funeral for a monarch held at Westminster Abbey since King George II’s in 1760,  will begin at 11 a.m.

At 12:15 p.m., Elizabeth’s coffin emerges from Great West Door and Westminster Abbey for a procession to Wellington Arch.

At 1 p.m., the coffin will be loaded into the state hearse for the drive to Windsor.

At 2:55 p.m., the coffin arrives in Windsor for a second ceremonial procession through the town to St. George’s Chapel.

At 3:30 p.m., members of the Royal Family will arrive for a committal service that begins at 4 p.m. After the 45-minute service, Elizabeth’s coffin will be lowered into the royal vault. The Lord Chamberlain will break his white staff of office, symbolizing the end of his service as the coffin is lowered.

At 7:30 p.m., the Royal Family will return for a private burial. Elizabeth will be buried along with Prince Philip in the King George VI memorial chapel. Her father and mother are interred there, along with the ashes of her sister, Princess Margaret.

Much of what will happen is unprecedented for many who will be watching. Only those old enough to remember the last funeral for a British monarch — on Feb. 15, 1952 — may have memories of what a reigning king or queen’s funeral looks like.

But even that funeral — for the Queen’s father, King George VI — can only be a guide to a certain point, since it took place at St. George’s Chapel rather than the much larger Westminster Abbey, the place of great historic, royal and spiritual significance in central London where world leaders will join the Queen’s family to honour her.

There have been other royal funerals at Westminster Abbey in moderately recent memory — Queen Elizabeth the Queen Mother in 2002; and Diana, Princess of Wales, in 1997. Diana’s funeral was based on the plan for the Queen Mother’s. The funeral for Prince Philip, the Queen’s husband, was held at St. George’s Chapel in 2021, but was significantly scaled back from plans that had been made. It occurred during the pandemic, at a time when regulations permitted only 30 guests.